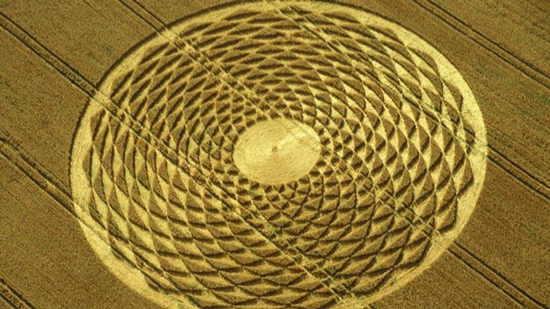 Richard Taylor, a physicist at the University of Oregon, is one of several academics to take interest in the crop circle phenomenon within recent years. Why? Well, when extremely complex, huge, and perfectly carved out geometrical patters to precision are made, people are going to notice.

Taylor believes that “crop circle artists are not going to give up their secrets easily”. He believes that unknown artists are venturing “into the countryside close to your homes” to “carry out their craft, safe in the knowledge that they are continuing the legacy of the most science-oriented art movement in history”.

He published those words in an August 2011 edition in Physics World, and it’s not hard to see why he feels this way. These designs are truly jaw dropping. 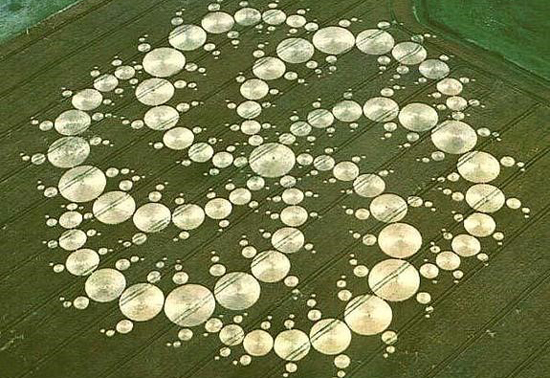 For example, this massive 780-foot (238 meters) crop circle appeared in a remote area (Milk Hill) of Wiltshire, England back in 2001. It was an extremely complex and elaborate design, composed of exactly 409 circles that form what is known as a triskelion – a motif consisting of three interlocking spirals. The symbol has been seen throughout history and across multiple cultures dating back thousands of years.

There are literally hundreds of documented examples online that you can look at.
Despite the fact that Physics World published Taylor’s article, and an actual study of the phenomenon was published by Taylor in the year prior in the science journal Nature, it still seemed to be a “de-bunking” mechanism.

For example, Matin Durrani, Editor of Physics World, said that it “may seem odd for a physicist such as Taylor to be studying crop circles, but then he is merely trying to act like any good scientist – examining the evidence for the design and construction of crop circles without getting carried away by the side-show of UFOs, hoaxes and aliens”.

This reminds of a famous quote given by a former head of the CIA, Roscoe Hillenoetter in 196 when he said: “Behind the scenes, high ranking air force officers are soberly concerned about the UFOs. But through official secrecy and ridicule, many citizens are led to believe that the unknown flying objects are nonsense.”

Today, UFOs are far from a “side show”, and Matin Durrani clearly had, or has no idea. It’s even well known today within the mainstream that there is something going on. These objects are constantly tracked on radar, and visually confirmed at the same time. Even Hillary Clinton’s campaign manager, John Podesta, has gone on the record saying that “the time to pull the curtain back on this subject is long overdue. We have statements from the most credible sources, those in a position to know – about a fascinating phenomenon, the nature of which is yet to be determined”.

A great paper published Journal of Scientific Exploration titled Estimates of Optical Power Output in Six Cases of Unexplained Aerial Objects with Defined Luminosity Characteristics, offers a comprehensive look at the oddities military pilots encounter when they are ordered to intercept one of these UFOs.

Why Crop Circles Could Be Bigger Than What the Physicist Describes

Although a relationship between crop circles and unidentified flying objects (UFOs) has been postulated, there have as of yet been no proven sightings (or credible witnesses) of actual UFOs in connection to the formation of these patterns.
Sometimes, military helicopters have been captured examining the circles as well, there are videos on the internet that allude to this. 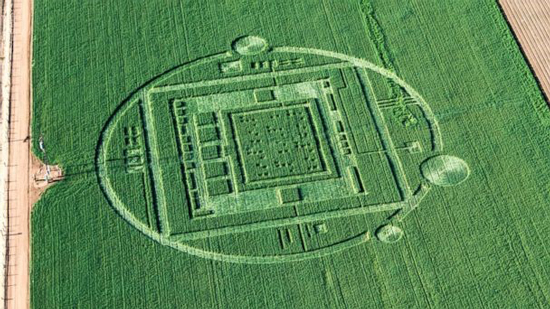 That being said, most of these formations are a little sloppy and, for the most part, the result of clever hoaxes, like the one in California shown in the photo above. But some are so intricate, meaningful, and precisely designed that their execution would require an enormous amount of time, effort and technology – not the work of a single night. Again, these complex patterns have appeared thousands of times throughout the world, though they are more predominant in the UK.

The crop circle at Milk Hill (the triskelion one) is a perfect example of this. Again, keep in mind however, that there have been many impressive and very believable circles created by hoaxers, and as many have suggested, such circle makers could indeed create beautiful works of art overnight.
The problem is, nobody has ever come forward and nobody has been caught in the act.

“Some of these formations are so immense and complex as to defy reason. And after all these decades, none of the perpetrators have been caught in the act of making any of the truly extraordinary formations” said Richard Dolan, historian, academic, author, and one of the world’s leading UFO researchers.

Many of the complex formations are completely unexplained, and riddled with oddities that lend even more mystery to the already confusing equation.

One of these oddities is the fact that some formations, for example, have crops that were completely pushed down without ever having been broken. In some cases they’ve been bent just inches above the ground.
Traditional hoaxers have used wooden planks in the past, but in some cases, it’s clear that this method could not be behind the resulting circles.

Some of these designs are so mysterious and complex that they’ve been studied in a laboratory setting, and some have indicated that the nodes of some of the stalks were blasted out on one side. It’s not conclusively known how this was done, but the effect has been replicated by highly localized microwave heating. This type of technique causes water inside to vaporize and dislodge. As a result, the stock flops completely over to one side.

“If something like this caused the formations, then we are clearly talking about a highly sophisticated agency behind the phenomenon”, said Richard Dolan.

This is a well-known perplexing phenomenon. Are crop circle hoaxers really blasting these stalks with highly localized microwave heating, or something that would produce the same results? Richard Taylor believes this is the only possible explanation, and has suggested that crop circle artists are using GPS devices, lasers, and microwaves to create these astonishing patterns of geometric forms.

Just as the Richard Dolan quote points out (above the picture), if something like this caused these formations, the ones responsible must have a tremendous amount of resources, people, and money at their disposal, not to mention the skills necessary to make such a large and mathematically perfect design. It would indeed, as Taylor suggests, be the most science-oriented art movement in history, if done by humans.

Another interesting oddity regarding crop circles is that the electromagnetic field over the area where the crop has been laid down to create the image is often electrostatically charged. “There is a mounting body of evidence that suggests that a rare form of electromagnetic energy called an ionized plasma vortex (generally known as ball lighting) is involved”, according to Greg Jefferys, historian.

This explanation was originally offered by physicist Dr. Terence Meadon, who believed that these patterns were the result of atmospheric phenomena. He suggested that wind currents and ionized plasmas are the culprit. This type of theory does have validity, as several investigators believe that some kind of light energy is key in creating these circles.

The crop circle phenomenon is very interesting. Understandably, one might be quick to instantly dismiss the idea that some of these designs could be the work of some unknown entity. Many reasons to further ponder these wonders of the world exist.
Foster Gamble, heir to Proctor Gamble Corporation, and great-great-grandson to James Gamble, illustrates in his film Thrive that the extremely complex circles are also littered with strange magnetic particles.

“The patterns of the formations themselves have been studied endlessly. Aside from being supremely beautiful, many seem to be messages in one form or another, often with cosmological implications. None seem ominous or evil. If one receives any sense or feeling from them, it is benevolence. If it were to be the case that these formations are created by an extraterrestrial or non-human intelligence, we may conclude that at least one of the groups here might in fact care about us and wish to help us,” explains Richard Dolan.

Ask yourself, could hoaxers have created all of these (thousands) of patterns? Why is this a phenomenon that dates back (according to some) thousands of years? Even the science journal Nature published an article about them in 1880.

Could a few people have created something as complex as the crop circles? In the middle of the night, leaving no traces, marks, or footprints?