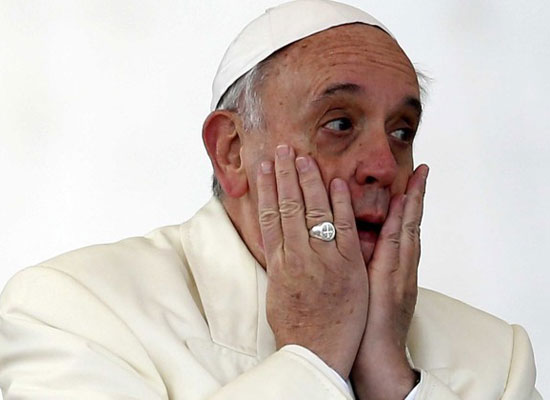 It’s absurd to think pedophilia in the Church rears its ugly head here and there, now and then – it’s institutional.

Reuters, June 29, 2017, from Sydney and Vatican City:
“A top adviser to Pope Francis was charged with multiple historical sex crimes in his native Australia, bringing a worldwide abuse scandal to the heart of the Vatican.

Appointed Vatican economy minister by Francis, Cardinal George Pell is the highest-ranking Church official to face such accusations. He asserted his innocence and said the pontiff had given him leave of absence to return to Australia to defend himself.

But Pell, a former archbishop of Melbourne and Sydney, had come under pressure from an Australian government commission on institutional child abuse, and had himself been under investigation for at least a year.”

What are the chances Cardinal Pell survives this scandal? Already ill, will he die before the Australian investigation puts him through the wringer?
The intrigues of the Vatican are endless, and they always have been. The silent wars taking place between factions have taken many forms. In this case, Cardinal Pell was originally appointed by Pope Francis to clean up the financial mess (numerous scandals) in the Church, but Pell ran into roadblocks as he tried to push that agenda forward.

Whether Pell is innocent or guilty of pedophilia, it’s possible that power blocs within Vatican City decided to discredit him and sideline him, in order to maintain secrecy about the money crimes they’ve been committing – they ramped up the pedophile investigation in Australia to take Pell out of the picture.

Since their earliest days, the Vatican has been a money machine, using religion as a front to raise cash. In the process, the Church “fathers” have condoned and/or participated in child sexual abuse and rape.
It’s absurd to think pedophilia in the Church rears its ugly head here and there, now and then. It’s institutional and embedded and always has been.

The limited hangout is a typical strategy of large organizations, when faced with exposure. Confession of a crime is made, as if the offense is highly unusual or limited to a particular person or sub-group, and a promise is made to investigate and root out the problem.
But the real goal is: admit a “mistake”, make that the whole story (when it isn’t), and hope the wider ongoing crime vanishes from public consciousness: “Well, it was just that one cardinal and some other pedophile bishop we heard about. I’m glad the Church is remedying the situation…”

Not on your life. The Church IS that situation, all over the world.
In the case of Cardinal Pell, a covert Church op can be taking place on several levels at once: Discredit Pell, smash his reputation in order to keep hiding financial crimes inside the Vatican; and produce a limited hangout by admitting that Pell is guilty of pedophile acts, as if he is the exception rather the rule.

For purposes of this covert op, it doesn’t matter whether Pell is, in fact, guilty or innocent. It only matters that he serves a purpose.
The public at large, of course, never gets to see the actual op. They only get to see what the Vatican wants them to.

If this sounds like we’re talking about an intelligence agency, a CIA, for example, and its devious strategies, we are definitely talking about that. The CIA and every other intelligence agency in the West has, over time, learned much from the machinations of Vatican City.
The Papacy and its right arm, the Jesuits (you can reverse that order of power and control) is the granddaddy of all intelligence operations; but that’s another story for another time. 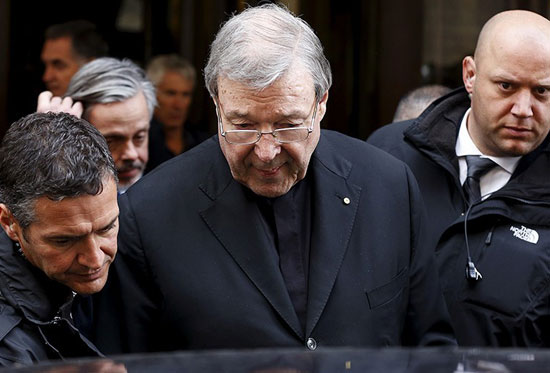 Australia’s highest-ranking Roman Catholic clergyman, Vatican treasurer Cardinal George Pell, has been charged by Australian police over sex allegations from “multiple complainants”. The Vatican has released a statement of support for Pell, citing his “honesty”.

“Cardinal Pell is facing multiple charges in respect of historic sexual offences,” Victoria state police deputy commissioner Shane Patton told the media in Melbourne in late June 2017.
The extent of the charges the senior Vatican cardinal is facing has not been revealed by police. However, according to Patton, “there are multiple complainants relating to those charges”.

There might be up to 10 alleged victims, Australian news website News.com.au reports, adding that they were minors at the time of the alleged assaults and are now aged from their late 20s to their early 50s.
The allegations are believed to stretch from the time that Pell was a priest in the Australian town of Ballarat to when he was Archbishop of Melbourne. It is alleged that the cardinal groomed boys at a swimming pool in Ballarat in the 1970s and committed sexual assaults at St Patrick’s Cathedral in Melbourne, according to The Australian.

The cardinal, who did not admit to any of the alleged offences and has denied reports that have been circulating in the media for months, was charged by summons to appear before a Melbourne court on July 18, which he did.

Since 2014, Pell has lived in the Vatican, with which Australia has no extradition treaty, meaning the cardinal could potentially avoid prosecution if he chose not to return to his home country. However, the Australian Catholic Church said in a statement prior to his return to the home country that the cardinal “Will return to Australia, as soon as possible, to clear his name. He said he is looking forward to his day in court and will defend the charges vigorously”.

The Vatican has released its own statement, stressing that Pope Francis has respect for Pell’s “honesty” and “energetic dedication” to his work on Church financial reform.
It went on to state that Pell has “Openly and repeatedly condemned as immoral and intolerable the acts of abuse committed against minors; has cooperated in the past with Australian authorities… has supported the Pontifical Commission for the Protection of Minors; and finally, as a diocesan bishop in Australia, has introduced systems and procedures both for the protection of minors and to provide assistance to victims of abuse.”

Pell, 76, was promoted to cardinal in 2003 and three years ago he was appointed to serve as the Vatican treasurer, considered to be the third most powerful post behind the Pope.
While it is the first time that formal charges are brought against Pell, he was subject of an investigation in the early 2000s after claims emerged that he had molested an altar boy back in the 1960s.

At the time, Pell denied the allegations against him, dubbing them “lies”.

Cardinal Pell is Just 1 of Over 8,000 Priests Accused of Pedophilia

In February, the Australian Royal Commission into Institutional Responses to Child Sexual Abuse released a report stating that more than 4,000 children, mostly boys, have been allegedly sexually abused by Catholic priests in Australia over a period of decades.

According to the investigation, since the 1950s some 7% of priests in the country were alleged perpetrators. The commission also said that since the 1980s, the Catholic Church has paid over $200 million to victims of alleged sex abuse committed by priests in Australia over decades.

The Fraudulent Monetary System & the Occult Meanings of Mortgage: Why a Mortgage Is a Pledge to the Dead