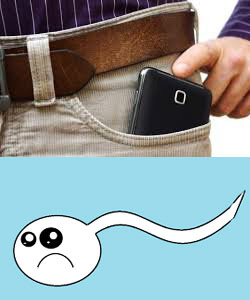 Earlier this year an Israeli study found that men who store their cell phones in their front pockets have significantly higher rates of abnormal sperm. Now a new study out of Australia has found more compelling evidence that cell phones may be hurting your fertility.

Instead of conducting their own experiment, the University of Newcastle examined 27 separate research studies that have been conducted over the years (also known as a meta-study) and determined that the link between cell phone radiation and falling sperm counts was nearly conclusive. Twenty-one of these studies showed a causal link between cell phone radiation and sperm damage. On average, cell phone exposure resulted in an 8% decrease in sperm motility, and a 9% decrease in sperm viability.

According to the authors of the study, “While this subject remains a topic of active debate, this review has considered the growing body of evidence suggesting a possible role for RF-EMR [radiofrequency electromagnetic radiation] induced damage of the male germ line… In a majority of studies, this damage has been characterized by loss of sperm motility and viability as well as the induction of ROS generation and DNA damage.”

So far, however, the scientific community is reluctant to say that cell phone radiation definitely damages male fertility. That’s because no one can figure out how this is possible, since cell phone radiation is considered non-ionizing. Despite that, the author of this study has recommended that “men should not store their cellphones near their genitals”.