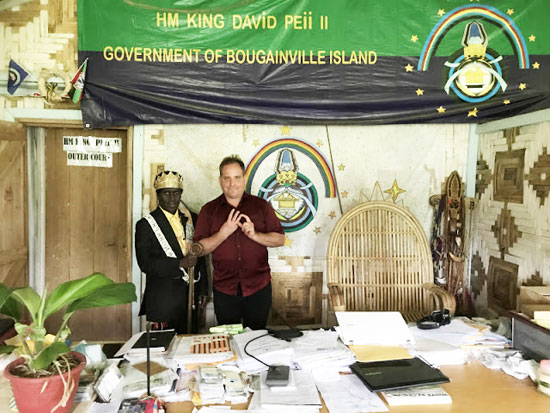 The Island of Bougainville in the South Pacific has been the scene of an epic decades-long struggle that resulted in locals, armed only with axes and bows, defeating troops armed with the latest world class weaponry.

The battle pitched the natives fighting to retain their ancestral homes against a Rothschild multinational fighting to steal the worlds’ largest gold deposits at the Panguna mine. As a result of their victory the Nasioi people of Central Bougainville became the first indigenous peoples in the world to force a global mining multinational to give up one of its richest ventures.

This is not just a local matter, because there is so much gold on that Island that it could affect the future of the global financial system. The international bankers say there are only a few tens of billions of dollars’ worth of gold and copper there, but, if we use the fractional reserve methods employed by the Federal Reserve Board in 2008 to price gold (700 tons of gold was turned into 750,000 tons worth of gold backed bonds), then it is worth hundreds of trillions of dollars.

Furthermore, locals say the mine was covering up a massive money laundering operation by claiming gold was copper, meaning the mine, and six other known rich gold reserves on the island, are potentially worth hundreds of trillions of dollars even without fractional reserve magic.

“They would take the gold out at night and hide it in caves,” according to Bougainville Revolutionary Army sources.

The mine was operated by Rio Tinto Zinc from 1972 until 1989 before the locals shut it down, emerging victorious after a decade long war that resulted in the death of about 30,000 people or more than 10% of the population, according to BRA sources.

A BRA general, “Joel” describes how the unarmed rebels were able to defeat a state of the art army: “When we first attacked them we only had axes and spears and knew that many of us would die,” he says. “We used guerilla tactics, we attacked one soldier and took his gun, with that gun we could kill 3 or 4 other soldiers and take their guns and so on; that is how we armed ourselves,” he says.

Red Cross officials working on the island also say that to this day there are extra-judicial murders and many “disappeared people,” as a result of the conflict on the island.

Furthermore, the resistance army won the war only to face a blockade that, to some extent, continues to this day.

Rio Tinto Zinc claims they have handed over control of the mine to Bougainville Copper Limited (BCL) that is mostly owned by the Autonomous Government of Bougainville (ABG).

Rio Tinto also claims they are not liable for the enormous environmental damage they caused by dumping mercury and other poisonous mine slurry into a local river because they were abiding by local laws at the time. However, if you take a look at Bougainville Island on Google Earth you can still see clearly, decades after the mine closed, the scars on the landscape caused by it. They should not be allowed to get away with environmental destruction so great that it shows up on satellite photos.

The Twin Kingdom of Meekamui and Papala, the locals’ name for the island, is headed by King David Peii II who wants to charge the owners of Rio Tinto with war crimes and sue them for environmental destruction at the International Court of Justice in the Hague.

The BCL people for their part, are trying to re-open the mine and promise to be nice to the environment this time but the locals are so bitter about the mass murder and environmental destruction that they do not want BCL or ABG to have any role whatsoever in the mine.

This is how King David views the situation:
“ABG (Autonomous Bougainville Government) is simply an agent of the Government of Papua New Guinea. Its headquarters are located at Waigani, PNG. Whoever controls PNG also controls ABG. As you might be aware Australia granted independence to PNG in 1975. However, Australia still de facto controls PNG.

According to 2011 statistics Australia raked about K19.8 Billion PGK [Papua New Guinea Kina, 1 kina=0.31 US dollars] from its companies in PNG but only gave about K450 million PGK back in the form of AusAid. That’s about 3% only; 97% is retained in Australia. The borrower is a slave to the lender. PNGeans are happy to receive AusAid funds for their projects but don’t know the real story.

ABG, was established because the Bougainville leadership split up immediately after winning the 10-year war against PNG and BCL/Rio Tinto. The VP Joseph Kabui decided to negotiate with the PNG Government due to lack of funds for services, etc, while the President Francis Ona did not think it was right to negotiate. Though both have now died and gone their successors are still alive and active. I am the successor of the late Francis Ona under the Twin Kingdom Agreement.

ABG is down at the bottom end of the international food chain of that old control system, and therefore, cannot say nay to BCL, Rio Tinto, PNG, Australia or their hierarchies or controllers because it’s a slave to its lenders.

BCL (B’ville Copper Ltd) is still owned by foreigners (or non-Bougainvilleans). The shares they claim to have given to ABG are still controlled by foreigners because ABG itself is a foreign agent on Bougainville anyway. ABG was established by its financiers (PNG & Australia, etc) to serve their own interests in our sovereign island nation.ˮ

What King David describes is true of much of the developing world where ruthless multinationals pillage the land with the help of mercenaries and locally hired and bribed “leaders.” It is estimated that multinationals loot Africa alone to the tune of $60 billion a year. https://www.theguardian.com/global-development/2014/jul/15/aid-africa-west-looting-continent

In that sense, the battle for Bougainville’s gold could mark a global turning point because King David promises to use the vast funds from the mine to help other developing countries. Countries in Africa and other developing parts of the world would do far better being paid a fair price for their resources than receiving often useless “foreign aid” from the countries that are looting them.

In any case, it is clear that somebody powerful went to a lot of trouble to try to prevent me from visiting King David. First of all, all flights into and out of Port Moresby in Papua New Guinea were cancelled the day after our arrival for unspecified reasons.

The result was to delay the arrival of King David’s representative, Mealagan Krishnan. Also, even though there are daily flights to the town of Arawa, a two and a half hour drive from the Kingdom’s capital, these flights were mysteriously cancelled during the week of our visit.

We were forced to take a flight to the town of Boka, a grueling 7 hour drive from the Kingdom and when we got there we found the main road was blocked by “a huge accident” forcing us to go by boat and back roads.

Finally, after meeting the King we were offered a tour of the Panguna mine on the following day. However, instead we were roused in the middle of the night with a warning that ten truckloads of mercenaries and corrupt police officers were on their way to try to force the land-owners of the Panguna mine to sign over the rights of the mine to BCL.

We were also told they would try to kill us. The locals fled trees across the road and set up armed road-blocks to stop the mercenaries from chasing us after we left. Armed conflict was avoided at the last minute but the BRA told us it was our arrival that led to the dispatch of the mercenaries.

In any case, as a result of our visit, we will be appealing for international help to allow the locals to develop the mine on their own in an environmentally friendly manner. The King promises the billions or trillions of dollars that will flow from the mine will be used to help the people of Bougainville and the world.

Though many of the Bougainevillians we met were barefoot, they carried smart-phones and knew more about the true nature of the international financial system than the average reporter from the Wall Street Journal seems to (I have met many of them over the years).

I would rather have King David in charge of the Bougainville gold than the ruthless and incompetent Khazarian central bank gangsters who have done so much harm to this planet and its people.
Both Rio Tinto Zinc and BCL ignored multiple attempts by this writer to contact them. 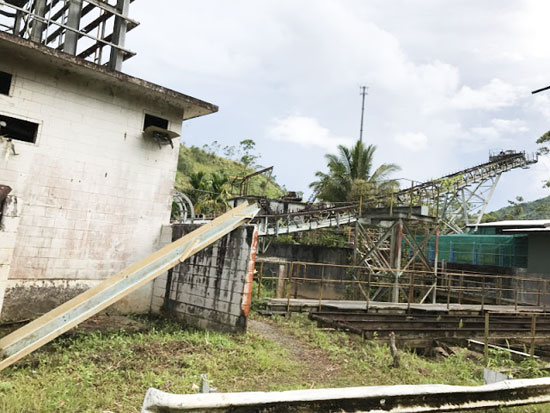 The derelict Panguna mine in Bougaineville