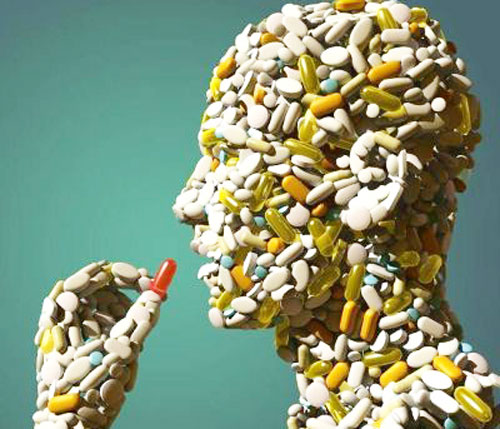 The overuse of prescription drugs in America has long since reached epidemic proportions. One of the driving forces behind this mass over-prescription, of course, is Big Pharma. And despite the evidence that certain drugs aren’t always necessary, reports indicate that doctors continue to prescribe them indiscriminately. If that wasn’t bad enough, many people are also prescribed more drugs to treat the side effects of another medication.

Big Pharma has come under fire for a number of things over the years. Monopolization of the industry, questionable advertising and price gouging are just some of the things that the industry has been criticized for. Corruption, greed and a disregard for fellow human beings seem to run rampant in the world of pharmaceuticals; the industry has paid out countless dollars for criminal and civil settlements over the years. And yet, nothing seems to stop them.

As a country, the US takes in an exorbitant amount of prescription drugs. In 2011, it was estimated that the average American citizen was taking 12 different prescription drugs yearly to manage or treat chronic health conditions. Over the last twenty years, spending on drugs has increased by a woeful $200 billion.

There are many factors that contribute to ever-increasing amount of prescription drugs in the United States. For example, many drugs come with side effects like depression, insomnia, sexual dysfunction and other health issues. Instead of lowering the dose or trying an alternative drug, doctors will often just prescribe a second medication to treat the effects of the first drug. A 2012 study published in the journal Annals of Family Medicine found that the “prescribing cascade” — where doctors prescribe more medications to control the effects of a primary prescription — is a key contributing factor to the heavy use of pharmaceuticals in healthcare.

The same study found that most physicians reported prescribing two or more medications per one medical condition to help reach their target for the patient. More than half of the patients observed were taking five or more prescription medications.

Big Pharma has found a number of different ways to influence physicians when it comes to what drugs they prescribe. For example, many pharma companies have serious financial ties to medical communication companies (MCC), like WebMD or Medscape. Physicians who use these sites may not be fully aware of how much money organizations like these receive from the drug and medical device industry. Many of these MCCs also offer continuing education courses for physicians. Physicians may not be aware that the involvement of these MCCs with Big Pharma could inevitably compromise their own education.

MCCs are not Big Pharma’s only method of manipulation. Clinical trials are often designed by the industry to influence and market drugs to doctors. The pharmaceutical industry even offers educational courses on their latest products, often showcasing them for non-FDA approved uses — and even when there is no proof of efficacy or safety.

Direct marketing to patients is another key issue in the age of over-prescription. When people go to the doctor, they expect the doctor will give them something to make them better. This not only puts pressure on the physician to prescribe, but it also makes even the average person a target for Big Pharma. After US government restrictions on direct consumer marketing became more lax, patients became more upfront about asking about new treatments. The pharma industry spends some $21 billion a year just to push their products and many of their advertising and promotional techniques toe the line of being misleading and false without hesitation.

In 2015 the industry spent a record-breaking $5.4 billion of direct-to-consumer ads alone. The same year, Americans spent over $450 billion on prescription drugs. Apparently, Big Pharma’s efforts paid off. Direct-to-consumer marketing remains a controversial practice; many people seem to think it somehow empowers consumers, but the reality is that Big Pharma is marketing expensive drugs to unwitting future customers. When you see an ad for a drug on TV — and in the US there are about 80 drug advertisements per hour — they are not trying to help you become more aware, they are trying to sell you a product.

Big Pharma’s marketing tactics do not end with doctors; they know one of the best ways to get people hooked on their products is to advertise directly to the people who will be consuming it.