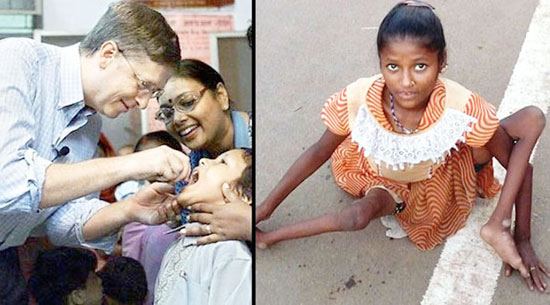 It isn’t clear if Bill Gates was veiling a threat to help depopulate the planet by 30 million people, if he was simply scare-mongering, or warning of a true cataclysmic-level bioterrorism event, but at the Munich Security Conference from 2017 the man who has been kicked out of India said that, “a genetically engineered virus such as small pox could wipe out up to 30 million people in less than a year.”

Gates is a multi-billionaire, and the founder of Microsoft, but he has also been a vocal supporter of questionable investments that have a profound impact on people’s lives. At one point, Gates owned 500,000 shares of Monsanto stock, and his Foundation, with an endowment larger than all but four of the world’s largest hedge funds, is known to have its tentacles in many programs meant to sterilize, and force toxic vaccinations on unsuspecting and indigent populations.

The Gates Foundation is also heavily invested in companies that contribute to obesity, and a number of other chronic health issues, including McDonald’s, Pepsi-Co, Coca-Cola, Burger King, and Walmart.

The Foundation is additionally invested in Dynacorp, one of the biggest military industrial contractors on earth, whose clients include the U.S. Drug Enforcement Agency, the Department of Defense, Department of State, Department of Justice, Internal Revenue Service, Securities and Exchange Commission, FBI, CIA, and HUD – all government agencies notorious for rampant, unchecked and egregious fraud, along with Geo, a private prison group.

Then there’s the Foundation’s monetary support of the entire oil industry including: Exxon Mobile, BP, Shell, ConocoPhillips, and Chevron, just to name a few.

Additionally, and perhaps most interestingly considering Gates’ warning of ‘highly deadly,’ genetically engineered strains of viruses that could wipe out a large swath of people, the Bill and Melinda Gates Foundation is also heavily financing Big Pharma and Big Biotech.

Gates helps fund institutions like the GAVI Alliance, the Global Health Innovative Technology Fund, and the Program for Appropriate Technology in Health (PATH) – public-private partnerships purportedly devoted to saving Third World lives. These organizations are supposedly independent, but so heavily funded by Gates as to function as virtual arms of the Foundation, these organizations began to conduct large-scale clinical trials in Africa and South Asia in the mid-2000s for a number of vaccines meant to prevent the very type of mass bioterrorism he is warning about.

These investments are important background information to have considering the implications of Bill Gates’ statement in Munich:
“We also face a new threat. The next epidemic has a good chance of origination on a computer screen [no surprise here since Silicon Valley has spent over a decade researching bioweapons created by genetic modification of viruses and bacteria] on a terrorist intent of using genetic engineering to create a synthetic version of the small pox virus, or a contagious and highly deadly strain of flu.”

Gates goes on to blame lacking international security for the possible epidemic of a new rogue virus, ignoring the fact that his own well-funded institutions are helping to create bio-terrorism weapons, otherwise known as germ warfare.

Just in case we weren’t sufficiently terrorized, Gates reminded the audience of the scale of the 1918 flu pandemic which infected around 500 million people and claimed between 50-100 million lives.

Gates asked our government to step up militaristic action against bio terrorism, yet this seems odd considering that our own Navy sprayed people off the coast of Los Angeles out of a massive hose, with a virus created in a lab as part of an experiment in the 1950s, affecting possibly 800,000 people without their knowledge or consent.

Then there’s the incidence of government researchers studying the effects of syphilis on black Americans without informing the men that they had the disease – they were told they had “bad blood.”

And the Army has droves of challenged medical reports questioning the “harmless stimulants” used in numerous different biological weapons, released on native populations.

In recent history, the military has tested the following pathogens on the public, often without their consent, and many more which likely have not been not revealed due to their highly classified nature:

For those who don’t believe sterilization and depopulation may be part of the agenda behind Gates’ statements, consider the U.S. Army Biological Warfare Laboratories (USBWL) existed as a suite of research laboratories and pilot plant centers located at Camp Detrick, Maryland from 1943 under the control of the U.S. Army Chemical Corp Research and Development Command, which undertook “pioneering” research and development into biocontainment, decontamination, and gaseous sterilization of germ warfare.

Exactly how has our military failed to address bioweapons terrorism?

Gates continued in his statement:
“Whether it occurs by the quirk of nature or the hand of a terrorist, epidemiologists show through their models, a respiratory spread pathogen would kill more than 30 million people in less than a year.”

Silicon Valley has been talking about the bioterrorism battle and its price tag for years now. Tesla’s latest Model X will even have its own counter-bioterrorism system. It makes you wonder. Is Gates was feeding us fear, as many did with Zika, Bird Flu, and other ‘probable’ epidemics that were pumped and dumped by mainstream media, or was he disclosing his next method of depopulation?