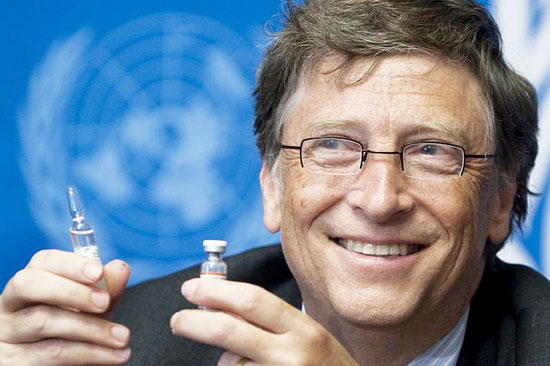 On January 18th 2017, in an article titled, “Bill Gates is Teaming Up with World Leaders to Stop the Next Deadly Pandemic,” Business Insider reported that “Governments from Germany, Japan, and Norway have pooled funds along with the Gates Foundation to raise a total of $490 million so far.

The target is $1 billion, which Coalition for Epidemic Preparedness Innovations (CEPI) says will help finance the first five years of research and development.”

One CBS News headline read, “Bill Gates on How to Outsmart Global Epidemics.”
The Bill and Melinda Gates Foundation is listed as a member of the World Health Organization (WHO).

Remember, as outlined in Bill Clinton’s book, his foundation and others like it are the ones calling for better obedience from organizations like WHO.
If the chips fall, it’s the foundations and trust funds that want to be the ones sitting on top.

In fact, an out-of-control pandemic might be the crisis of choice for the global elite.

Beyond a large death count, an out-of-control virus spreading worldwide could trigger the U.N. to impose their International Health Regulations, or IHR, which intends to manage the world’s response to a global outbreak of a deadly pathogen.

In early 2017, the Oxford Press released, “Governing Global Health: Who Runs The World and Why” by – who would have guessed it – Chelsea Clinton and co-authored by Devi Sridhar. The book discusses the current global model of principal/agent theory, or Public Private Partnerships funding and managing a coordinated response of a worldwide pandemic and what is needed to improve this model.

The “Governing Global Health” description reads, “One of the more important recent trends in global health governance, though, has been the rise of public-private partnerships (PPPs) where private non-governmental organizations, for-profit enterprises, and various other social entrepreneurs work hand-in-hand with governments to combat specific maladies.”

Basically, the moneymen (the banks and trust funds) that fund international health bureaucracies like the U.N., the WHO and The World Bank, are not doing a good enough job managing their money, or not following through with some actions these money-groups hoped would happen.

The case made in this book suggests ways the requests of those financing these plans are heard loud and clear and acted upon appropriately.

In the case of a world pandemic, make no bones about it, it’s the mega-banks and trusts who will remain the ones “Who Run The World.”

Co-author Devi Sridhar is not only an academic research professor; she is also the director of the World Health Governance Program. Of course, Chelsea Clinton is also a member. This group, which is funded by the World Bank, is attempting to steer the management and distribution of health funds contributors like the Gates Foundation or The Global Fund to fight AIDS using U.N. rules like the IHR.

An article from the U.N. Chronicle titled, “National Security and Pandemics,” said of the IHR, “IHR compliance needs to be understood through a regional lens and supported by global institutions…” it continued, “regions and individual states cannot do this on their own and WHO has a major role to play in assisting its regional offices and cooperating with its member States.

In other words, if a global pandemic happens, bodies like the WHO will be there alongside national and local governments all they way down the line to insure that their “IHRs” are carried out exactly as designed.

Naturally, groups like the WHO, the World Bank, the U.N. and others consider themselves “International Governing Bodies,” so they assume their rule not only within nations and states, but as the grand rulers of the planet as well.

The New York Times reported that they obtained a draft of an upcoming Trump administration executive order to reduce the United States’ contribution to the U.N. by at least 40%.

The first of the two draft orders titled, “Auditing and Reducing U.S. Funding of International Organizations,” names criteria within certain U.N. agencies and other international bodies that will forfeit American support.

The New York Times reported, “Those criteria include organizations that give full membership to the Palestinian Authority or Palestine Liberation Organization, or support programs that fund abortion or any activity that circumvents sanctions against Iran or North Korea.”

What was not mentioned in this report is if, or how this order will deal with WHO and other international health agencies that the U.N. will rely on if a deadly global outbreak occurs.

Beyond the disastrous death count that this event will cause, the push by an international body to put the United States government second place to a global management system is also at risk.

In the case of such an event, the United States must remain in ultimate control of all of its resources.

This executive order, if the New York Times was reporting accurately, would make a great opportunity to disable this threat before it takes flight.