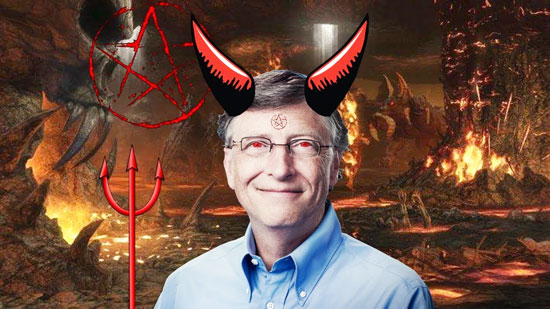 Bill and Melinda Gates, via their Gates Foundation, have donated billions of dollars to fund new vaccines – medicines that, in fact, have caused great harm to a great number of people. But with about a million viruses in existence that we still know nothing about, it’s likely that the Gates Foundation and other globalists will pour more resources into developing new vaccines that will work to reduce the population.

That seems inconceivable on its face, but when you examine the facts and some of Bill Gates’ own statements, you’ll discover for yourself that is exactly the plan.
As reported by The Week, since the dawn of Man, viruses have had deadly effects on populations, remaining hidden for centuries before they finally evolve into something that kills. In modern times, when a new virus begins to take its toll, medical science plays a game of catch-up by attempting to devise a vaccine that will combat the virus. That’s “always too late” says Jonna Mazet, a scientist at the University of California, Davis. She told that science needs “to think about something different”.

She has proposed a global effort to identify and catalogue every virus known and as yet unknown through an effort called the Global Virome Project. Indeed, the idea is not new; it’s been around for some time and is supported by individual scientists and organizations that include the U.S. Agency for International Development, a nonprofit group known as the EcoHealth Alliance, ProMED, HealthMap, and epidemic risk firm Metabiota.

Gates has said he wants to lower the world’s population

At present, there appears to be support for a global effort picking up steam, with health organizations and scientists constantly called upon to respond whenever a new viral threat arises.
Also, the World Health Organization has launched the Research and Development Blueprint, a project that aims to bolster development of treatments and countermeasures for diseases that the global health agency has assessed as posing the most critical risks, including Crimean-Congo hemorrhagic fever.

Who’s involved? The World Economic Forum, the Bill and Melinda Gates Foundation, and the Wellcome Trust, which, together, have formed an organization known as the Coalition for Epidemic Preparedness Innovations. The goal, ostensibly, is to find answers and help fund the development of vaccines that would be needed in an epidemic but not likely to be profitable for the vaccine makers.
Plus, a pilot project that’s been underway for about seven years, called PREDICT, has already discovered about 1,000 new viruses.

But is the real goal to save as many lives as possible? Not according to the billionaire Microsoft founder. During a TED talk that was posted online around 2010, Gates ties new vaccine development in with reducing the population of the planet as a way to arrest “global warming/climate change”: “The world today has 6.8 billion people… that’s headed up to about 9 billion. Now if we do a really great job on new vaccines, health care, reproductive health services, we could lower that by perhaps 10 or 15 percent” Gates actually said, as further documented by TruthWiki.

The TruthWiki site noted further that Gates wants to trim the world’s population – to lower “dangerous” CO2, which is actually necessary to sustain life on the planet – using vaccines in different ways.


Reducing the population through the use of vaccine-generated pandemics

One, vaccines contain dangerous heavy metal toxins like mercury (thimerosal). Mike Adams from Natural News has actually tested flu vaccines at CWC Labs and found them to contain mercury. Many also contain other heavy metals like aluminum, as well as known carcinogens like formaldehyde, which would kill people in slow, often undetectable ways.

Vaccines could also be deployed to reduce or eliminate fertility, thereby artificially lowering birth rates around the world. In fact, in some industrialized nations throughout Europe, this is already happening as death rates exceed birth rates. Vaccines could be used to cause miscarriages or spontaneous abortions, which is much more easily accepted by establishment scientists.

Then there could also be a pandemic created through the use of vaccines, to kill off hundreds of millions or even billions of people. It could be as easy as developing a virulent new flu strain then forcing nearly everyone to take it.
Either way, as you can see here, Gates has made it clear reducing the world’s population over the phony issue of “global warming” is his goal, and he has said as much.

5G Not Health Safety Tested But Still Being Rolled Out Everywhere