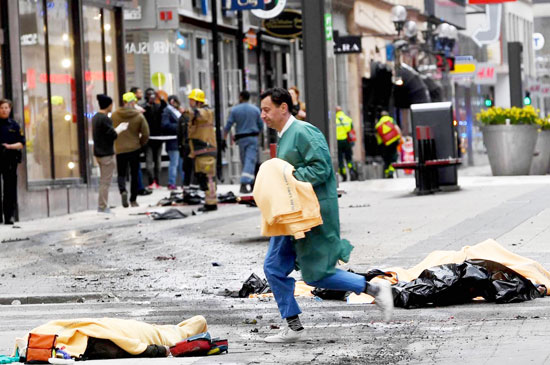 Both police and Swedish terrorism experts are saying that, just like London, there was no mastermind behind the Stockholm attack. The driver had no known links to a terrorist group, and no group has claimed responsibility. But still the politicians insist this was a terrorist attack, and all the billions allegedly spent fighting terrorism are justified.

Do they really think we are that stupid? To paraphrase Oscar Wilde, London might have seemed like misfortune, Stockholm looks like carelessness. If there really was a mastermind behind these attacks, it would be whoever benefits from them the most. Who is that – terrorists or Western politicians?

In Stockholm the attacker drove the truck right down a busy central shopping street at high speed. He is a 39-year old man from Uzbekistan. He was already resident in Sweden and had applied for a Swedish Residence Card, essential for all non-EU nationals who live there legally. It is known that it takes many months for these applications to be processed, so the Swedish authorities don’t mind if you don’t have one as long as you can show you’ve applied. But in June 2016 his application was refused, and he was told to leave the country.

It is easier to enter a new country as a migrant if you left the previous one voluntarily, without any sort of police record. Rather than do this, the suspect went underground. Now we are told that for some reason he drew attention to himself by hijacking a truck, murdering people and getting arrested. Why would he do that?

Much of Sweden works on a “you scratch our back, we’ll scratch yours” basis. For example, everyone has to have a legal address, and actually live there, but many people live in apartments which have been illegally sublet to them, at higher rates than legal accommodation could charge. In many cases the local tax office, where the address must be registered, knows all about this but does nothing because it has something it can use against the people concerned later on. Most of the time it doesn’t want to spend time and resources trying to prove things, so it lets things lie unless the lessor commits some other offence.

Similarly, everyone who enters Sweden as a primary immigrant, i.e. not an asylum seeker, has to have a university place, a permanent sponsor or a hiring certificate demonstrating their employment. Consequently a few known individuals in each locality register paper businesses which issue these certificates, at a price, for non-existent jobs. These are then used to gain registration with the tax office. No tax is ever paid, and the public agencies know these jobs are false. But they let it go as long as those involved keep quiet, because someone is making money out of the process.

How far can these relations be extended? For at least 15 years representatives of the catering trade have been officially approaching the UK government complaining about its double standards. Restaurants which employ people who have no right to work in the UK are raided, and the owners fined. The owners then discover their ex-employees are now working for government contractors, cleaning the government offices. When John Reid “discovered” this after being appointed Home Secretary in 2006 he tried to make it into a major scandal, but soon discovered he was biting the hand that fed him. This is the real reason he left the government when Tony Blair stepped down as Prime Minister.

Like London attacker Khalid Masood, the Stockholm attacker had nothing to gain by doing what he did. But if he had been promised things by those who did have something to gain from his attack, that is another matter. The Chechens who suddenly migrated to the terrorist training camps in the Pankisi Gorge in Georgia a few years ago have nothing to gain but violent death. However, their families are the ones driving around in Mercedes, which cost more than the combined annual incomes of the other residents of the villages they live in.

There is always a chance, of course, that we might not be as stupid as the politicians want us to be. There needs to be external confirmation that the London and Stockholm incidents were terrorist attacks committed by people who oppose Western values. The pictures of the chemical weapons attack in Idlib, Syria, seem to provide such confirmation.

That is, until we look a little closer at the pictures of what we are told is an attack by the Assad government – a terrorist regime, we are told. In these we see the White Helmets, humanitarians by day and combatants alongside the militants at night, treating the victims of what was immediately stated to be a Sarin gas attack. They aren’t wearing gloves, and most don’t have masks either.

The Syrian government, and its Russian supporters, have been accused of Sarin gas attacks before. So the White Helmets wouldn’t begin treating victims of one without wearing the safety gear. They know that without it they would start vomiting and defecating and not be in any fit state to help anyone. That’s what exposure to Sarin does, and what it doesn’t do is make people foam at the mouth, as they are doing in the scenes from Idlib.

We can also see that people are being treated near a cave which has a hosepipe sticking out of it. What is that doing there, and what outlet point does it lead to? The evidence suggests that the videos and pictures of the so-called “chemical gas attack” portray the aftermath of an action the Syrian government admits to taking – the bombing of a rebel-held missile factory in Khan Sheikoun. The Russian Su-22 bombs used for this can’t be adapted to contain chemical substances, so if chemicals really were involved, they were already present at the site – as is also suggested by the men in sparkling clean white suits, of the type used in chemical factories, apparently being treated for the effects of chemicals dropped from the sky.

Then, as the Swedish “terror attack” story began to unravel, two bombs went off in churches in Egypt, killing at least 44 people. The Islamic State has claimed responsibility for these, saying they were committed by – again very conveniently – suicide bombers wearing vests.

However the response of the Egyptian president was interesting. He was quoted as telling the media: “Deal with the issue with credibility, and responsibility and awareness. It’s not right what I’m seeing being repeated on all of our channels, and you know this hurts Egyptians.”

These 44 dead people are part of another public relations stunt. Of course the Islamic State knew the churches would be packed. It has known that for many years, and has been targeting the Christian communities of Egypt for many years. The response of the Egyptian government has been the same as that of Syria – to offer them protection, on certain terms, to prevent the country being divided by external forces like Iraq and Afghanistan were.

Not all flags are false 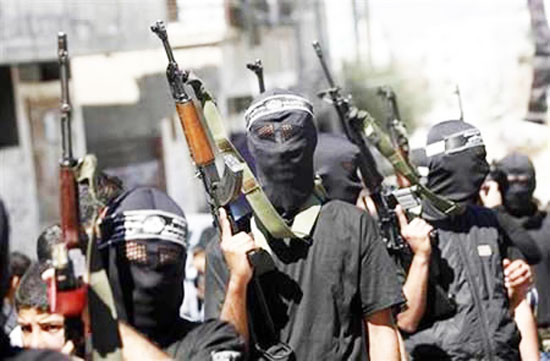 Of course terrorism exists. There are many organised terror groups whose aim is the violent overthrow of the states they operate in, and the subjugation of their peoples to a new sort of state, with a new set of values. They maintain mass murder is justified, and are happy to use it as a weapon. Such groups exist in some form in every country, regardless of what their ideology is and what they are fighting against.

However national governments have always been quite happy to use terrorism for their own purposes. When the policy goals of terrorists match those of a sovereign state, cosy alliances are quite common. All the groups later branded “terrorist” in Afghanistan had once been armed by the West to get rid of the Soviets by the same methods. We are always being told today that such and such a dirty foreign state is a “sponsor of terrorism” but even leaving aside the current US sponsorship of terrorism there are many examples of the decent West doing the same, both directly and through advisers.

If Western governments want to terrorise people in allied countries, or even their own, they possess the means to do so through the hands of others. Even if the London and Stockholm attackers were lone individuals, what they did served exactly the purposes the Trump White House would have wanted them to – making the president look right, even when he was wrong. Trump’s whole life has been a tale of bluff, bluster and con, as his business record demonstrates. The highest value such a man has is appearing to be right, regardless of the reality.

In 1995 journalist Michael Crick wrote the book Jeffrey Archer: Stranger than Fiction which ultimately led to the disgrace of this best-selling author and politician. In it he argued that Archer’s whole life had been a string of compulsive lies which he had told to get on in life and make a lot of powerful friends. He got away with these until he was over 60 because these methods work in the corridors of power. With Trump in the White House, desperately trying to put himself above self-inflicted scandal as Archer did for so long, is that likely to change?

Before you get to statistics

The London and Stockholm attacks tell us very little about terrorism. They do however tell us a lot about how Western foreign policy is developing, and cannot but develop for as long as Trump is in charge.

The West knows it is lying about the Islamic terrorist threat, which was largely a Western creation for its own purposes. It also knows that the lies are wearing thin. So now Western foreign policy has adopted a new governing principle: doing whatever it can to convince the world the West is right when it knows it is wrong.

There are plenty of other things a foreign policy could be. It could be about strengthening democracy and human rights and opposing states which won’t give their people these things, as the West’s values would lead people to think it should be. Both the UK and Sweden are democracies with generally good human rights records. The West has no reason to undermine them, but is doing exactly that, with these countries’ governments’ own compliance, for the sake of a con they think will keep them in power.

Terrorists aren’t gaining from these attacks, because no terrorist group committed them. Only the politicians who are trying to convince us their lies are true can gain from them. The UK has been through this in Northern Ireland, where the conflict lasted so long because the official rhetoric about it didn’t describe the reality, and thus was inadequate to address it. Sweden hasn’t, but so many stories have now appeared about non-existent threats in Sweden that the red-green Swedish government will have to embrace them to have any international credibility in an age which has moved on from its traditional social democratic values.

People are dying for this. Perhaps the governments which claim to be opposing terrorism see these victims as collateral damage. How many people in these democracies would have voted to become collateral damage for an extended con operation?

The NWO Push for a Cashless Society – It Started in India