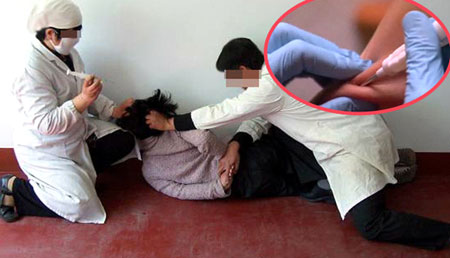 The U.S. Government’s plan to eventually have a fully microchipped populace has often been dismissed as a wild conspiracy theory, but the House of Representatives has passed a bill, HR 4919, that allows the government to award special grants to law enforcement allowing them to microchip adults and children that are considered to be “developmentally disabled”, giving them unrestricted tracking permissions.

The most disturbing part of this bill is perhaps the fact that local police will be able to decide whether a person viable for microchipping based on their own assessment of the individual’s mental or cognitive abilities.

The House of Representatives passed HR 4919, also known as Kevin and Avonte’s Law, which would allow the US attorney general to award grants to law enforcement for the creation and operation of “locative tracking technology programs”. Though the program’s mission is to find “individuals with forms of dementia or children with developmental disabilities who have wandered from safe environments”, it provides no restriction on the tracking program’s inclusion of other individuals. The bill would also require the attorney general to work with the secretary of health and human services and unnamed health organizations to establish the “best practices” for the use of tracking devices.

Those in support of the legislation maintain that such programs could prevent tragedies where those with mental or cognitive disabilities wandered into dangerous circumstances. Yet, others have called these good intentions a “Trojan horse” for the expansion of a North American police state as the bill’s language could be very broadly interpreted.

“While this initiative may have noble intentions, ‘small and temporary’ programs in the name of safety and security often evolve into permanent and enlarged bureaucracies that infringe on the American people’s freedoms. That is exactly what we have here. A safety problem exists for people with Alzheimer’s, autism and other mental health issues, so the fix, we are told, is to have the Department of Justice start a tracking program so we can use some device or method to track these individuals 24/7” Representative Louie Gohmert (TX) said in a floor speech opposing the bill.

Gohmert’s assessment is spot-on. Giving local police the authority to decide who is microchipped and who is not, based on their mental soundness, is a recipe for disaster. Though the bill specifically mentions those with Alzheimer’s and autism, how long before these tracking programs are extended to those with ADHD and bipolar disorder, among other officially recognized disorders.

Even the dislike of authority is considered a mental disorder known as “Oppositional Defiant Disorder” which could also warrant microchipping in the future. If these programs expand unchecked, how long will it be before all Americans are told that mass microchipping is necessary so that law enforcement and the government can better “protect” them?

NBC News predicted some years ago that all Americans would be microchipped by 2017, and while these claims seemed a little far-fetched to some, many are seeing this as a tip-toe towards the complete microchipping agenda.

Many Americans have been content to trade their liberties for increased “security” in the post-9/11 world, particularly when the State uses these talking points. Yet, as Benjamin Franklin once said “those who surrender freedom for security will not have, nor do they deserve, either one.”