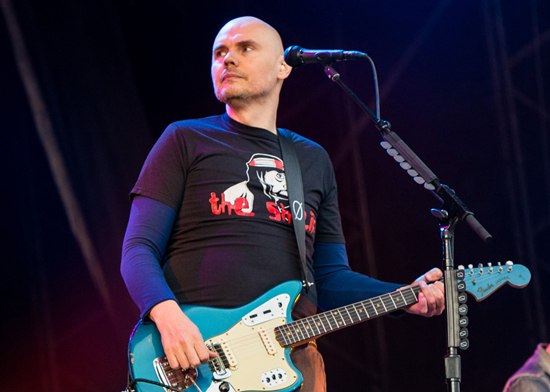 Smashing Pumpkins frontman Billy Corgan has opened up about his experiences in the record industry, telling Howard Stern that he has “witnessed a shapeshifting humanoid” in the flesh, before opening up to production staff after the show, informing them that the “record industry-Illuminati” is controlled by non-human reptilians.

Responding to a Howard Stern joke about reptilians, Corgan became serious and said: “Not to add to the conspiracy, but I’ve had paranormal experiences in my life that sort of lend itself into that category.”
Sounding surprised, Howard Stern encouraged Corgan to open up about the experience.

“I’m turning red I’m so embarrassed” said Corgan, before explaining: “Let’s just say I was with somebody once, and I saw a transformation I can’t explain”.
Howard asked: “The person transformed into something other than human?”
Corgan responded: “Yes, I saw it. I was totally sober. Imagine you’re doing something, and suddenly you turn around, and there’s somebody else standing there. It’s hard to explain without going into detail, I’d rather not do it.”

Corgan said he wasn’t hallucinating or imagining the incident. When he asked the shapeshifting humanoid-reptilian what had happened, the entity acknowledged what had happened.
Howard asked: “What did they say they were, from another planet?”
Corgan responded: “They wouldn’t explain. It’s a really messed up story. I’m being vague on purpose. It’s up there with one of the most intense things I’ve ever been through.”

The Smashing Pumpkins frontman later explained that he was being vague on air out of fear for his career and the wellbeing of his loved ones.
“Demons exist. They are real. They are reptilian. That’s why the Bible says Eve was seduced by a snake. Substitute reptile for snake”, Corgan said, before elaborating about his experience with the record industry-Illuminati.

Describing the record industry executive who shapeshifted in front of him during a meeting, Corgan said that he “can’t remember the exact words” the reptilian said to him, “but it was something along the lines of: All humans will suffer in unending agony”.

Corgan later explained that the encounter had a physical effect on him, leaving him in pain for days.
“Everything in me shook, my neck and head were rattled and my bones, muscles and organs, including my brain, were literally sore for days” Corgan said.
“I was so mad, I was really ready to kick his butt. Humanity is not taking this any more, we are waking up, we are through with this program.”

“In every civilization on Earth, all throughout the ancient world the snake men are mentioned. Although I can understand why someone wouldn’t believe what I’m saying. It’s hard to talk about. I didn’t believe either until I was standing face to face with one of them.”

Putin is concerned there will soon be genetically modified superhuman soldiers; calling on world leaders to agree to limitations and regulations

How The Internet Is Ruining Your Memory