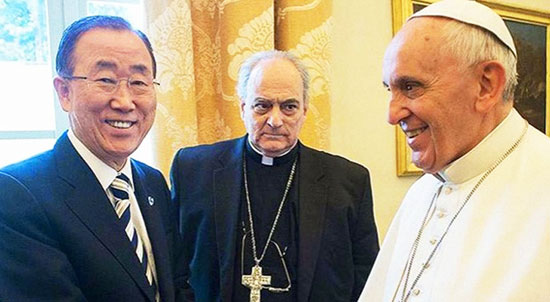 Catholic Church leaders have been meeting with key globalists

The Pope and other high-level Vatican officials have been meeting with key globalists to discuss how the Catholic Church can “serve the New World Orderˮ. A top globalism proponent has also attained unprecedented access and influence at the highest reaches of the Vatican, according to a presenter for an international symposium on population control.

The Catholic Church has been targeted due to its leverage and moral influence over the public in a bid to usher in NWO policies such as open borders and depopulation.

Globalism is welcomed and provided a platform at the Vatican in the Pope Francis pontificate, according to Italian journalist Riccardo Cascioli. By citing “climate changeˮ, the church can easily sway the opinion of its loyal flock to help introduce unpopular policy such as a single global currency, population reduction, migration, one-world government and a cashless society.

LSN reported: “Globalist are abetted principally by Bishop Marcelo Sánchez Sorondo, Chancellor for the Pontifical Academy of Sciences and the Pontifical Academy of Social Sciences. Cascioli revealed specifics leading to a «magic moment», in Sorondo’s words, that had been reached where the speech of the Church and that of the UN «have some synergy».ˮ

Cascioli was one of 12 experts from across the world to address the threat of population control for the International Conference on Population Control, a three-day online symposium conducted in October of 2017. In his presentation titled “Jeffrey Sachs, the Man Behind the Hidden Drive for Population Control, Masked as Poverty Reduction,” Cascioli first detailed aspects of Sachs’ thinking and explained the sustainable development concept.

The director of the Italian news outlet La Nuova Bussola Quotidiana also delved into the motives and development behind the infiltration by population control activists into the Catholic Church and how it has changed Vatican policy in recent years.

Cascioli described the introduction of the concept of sustainable development – the thinly veiled population control catchphrase – into the Church’s social doctrine as a “decisive step” in the globalist agenda. “The Catholic Church was – and it is – the only point of resistance to the ideology of the New World Order,” he said, “to the idea of a world-led government guided by technocratic elites.”

The Church, he pointed out, along with others, had prevented “approval of international statements decreeing the end of the natural family, the affirmation of gender ideology and the right to abortion” in the United Nations’ conferences of the 1990s.

“For this reason, the Catholic Church was a target,” Cascioli said. “They tried with campaigns for the expulsion of the Holy See from the United Nations, but they were more successful with the infiltration of associations and groups of pressure within the Church: formally Catholic, but in fact anti-Catholic.”

The most conspicuous instance of this, he said, was in the 1990s with the dissenting pro-abortion group Catholics for a Free Choice.

“A second reason is the attempt to use the great moral force that the Catholic Church undoubtedly exercises to put it at the service of the New World Order,” Cascioli added. “A decisive step to achieve the result was – and is – the introduction of the concept of sustainable development in the Church’s social doctrine,” he stated, “an instance that has also been supported by some bishops.” 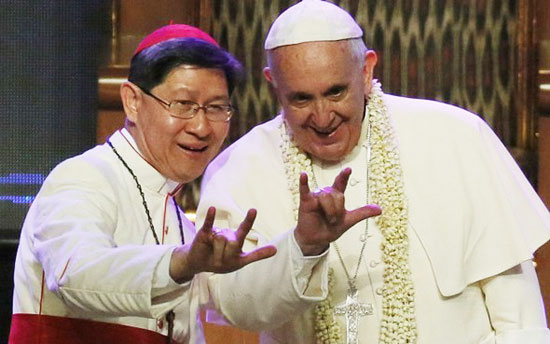 “Sustainable development guru Sachs is crucial to understanding the change in recent years in the Holy See’s stance on population, development and the environmentˮ, said Cascioli.

Sachs is a Harvard-educated economics professor at Columbia University and a high-level UN consultant regarded as a leading expert in economic development and fighting poverty. He has twice been included on the Time magazine list of 100 Most Influential People in the World.

He has advocated abortion in his work, describing it as a “lower-risk and lower-cost option” than having children. In his 2008 book “Commonwealth: Economics for a Crowded Planet” Sachs said legalized abortion is a cost-effective way to eliminate “unwanted children” when contraception fails.

In 2011, he said, “Nigeria should work towards attaining a maximum of three children per family.”

Sachs has been invited to collaborate with the Vatican a number of times, including moderating and co-hosting a Vatican conference on climate change in April 2015 and presenting at another later that year in November, as well as delivering a keynote lecture for the Pontifical Academy of Sciences in 2013.

Cascioli recounted for the conference how in a 2012 interview Sachs had told him, “In Africa, I met many bishops who, regarding the birth control, told me privately that they are in agreement with me, although for obvious reasons they can’t say that openly.” This statement exemplified Sachs’ thinking, Cascioli said, and his action, which is directed at the poor countries – especially Africa – and the idea of infiltrating the Church.

Sachs is “celebrated as one of the most important world economists and in the latest years a fixed guest star of conferences organized by the Vatican, especially from the Pontifical Academy of Sciences, more and more centered on ecology and sustainable development,” Cascioli said.

“In fact,” Cascioli said, “Jeffrey Sachs is the key figure to understand the transformation that has taken place in the Holy See’s approach to the issues of population, development and the environment.” “Sachs has devoted his professional life to sustainable developmentˮ, explained Cascioli, and he insists it is the answer to poverty.

For Sachs, sustainable development “requires a unified approach to the changes of society rather than simply seeking economic growth,” said Cascioli. This means combining economic development, environmental sustainability and the population with heavy focus, though, on the first two.

“The theme of overpopulation and, therefore, of birth control is constant in Sachs’ speeches,” Cascioli said. His own words offered several specifics from Sachs’ speeches that spoke of the world being overcrowded and humans being “in each other’s faces as never before” and “pressing on the Earth’s environment as never before.” “This would be enough to understand that we are facing a fundamentalist of birth control,” stated Cascioli, then listing further examples from Sachs’ 2005 book, The End of Poverty.

Sachs said poor countries were “stuck with” fertility rates higher than replacement rate, and that poor families with large numbers of children are held back in nutrition, health, and education. He praised “modern contraception” in “the empowerment of women.”

Cascioli also shared Sachs’ comments on the United Nations Population Fund (UNFPA), and how it has “helped to spur a massive increase in the use of modern contraceptives among couples in developing countries rising from an estimated 10 to 15 percent of couples in 1970 to an estimated 60 percent in 2000.”

“And it is also clear from the last passage which weapons are used in this war,” Cascioli noted, “contraception and still contraception. But also abortion, as he said on several other occasions.”

The origin of sustainable development

The term sustainable development originally generated from theories designed for the fishing industry for sustainable yield in the 1950s, Cascioli explained, and later in the 1970s, the “maximum ecologically sustainable yield” concept was transferred to the human species.

Sustainable development was introduced at the Stockholm Conference on the Human Environment in 1972 and continued from there, he said. “The Limits of Development,” a report from the Club of Rome global think tank, was published that year as well, warning of “four lethal dangers for humanity: population explosion, scarcity of food, scarcity of resources, and the energy crisis.”

Cascioli said the report sold 12 million copies in 27 international editions in only a few months, having a great impact on public opinion and the scientific community.

Sustainable development would be defined later in the 1980s by the U.N.-instituted Brundtland Commission as “development that meets the needs of the present without compromising the ability of future generations to meet their own needs.” This might seem like common sense, Cascioli said, but the underlying goals are based on the premise that population growth is responsible for underdevelopment and damaging the environment.

Various conferences convened by the U.N. throughout the 1990s on development, the earth, food security, human rights and women’s rights established official goals for a 20-year plan to address the varied issues. Sustainable development was a common thread throughout the conferences, and the concepts of reproductive health and reproductive rights were brought in as well.

“It is worthy of note that such concepts fall within a wider attempt to fix a set of ‘universal values’ or better, a ‘global ethic,’” said Cascioli, “to whose realization all religions are also called upon to collaborate.”

The Catholic Church previously opposed the idea of sustainable development as it has been proposed by population control advocates, Cascioli explained, which is to limit population in poor countries and stop economic growth in rich countries.

Further problematic aspects of sustainable development in the Church’s view are the theory’s negative vision of man, its alarmist view, and its promotion of birth control. Cascioli said the Compendium of the Social Doctrine of the Church edited in 2005 by the Papal Council for Justice and Peace, the first instance where the Holy See compiled all of its social teachings, is the principal source for understanding the Church’s authentic judgment on sustainable development.

In consulting that source, he said, “We discover that such a concept does not find space in the Church’s teachings.” The Compendium “clearly confirms that demographic growth is fully compatible with an integral and shared development,” Cascioli pointed out. But things are very different now “many things have changed in recent years,” however, he said, to where to those previously “declared enemies of the Church today are welcomed with all the honor in the Vatican.”

“Jeffrey Sachs is the most striking example,” said Cascioli, “but just scroll through the topics and list of speakers at the conferences organized by the Pontifical Academy of Sciences, and you realize that the concept of sustainable development, with all its declinations, is now home to the Vatican.”

“How could this happen?” he asked. “Here we have to understand that since the U.N. Conferences of the 1990s the Catholic Church has become the main objective of the Neo-Malthusian forces.”

An attempt was made in the preparation of Benedict’s encyclical Caritas in Veritate, he said, but was ultimately rejected. “Caritas in Veritate is based on the concept of integral human development which, as is clear, is diametrically opposed to sustainable development,” Cascioli said.

An important sign of this, Cascioli pointed out, is the introduction of sustainable development in Pope Francis’ encyclical Laudato Sì. Cascioli said, “This is a real turning point.” “And it’s no coincidence that Jeffrey Sachs has become ubiquitous in events organized in the Vatican and not only there, more and more focused on environment and poverty.”

Cascioli told the conference he was “not sure that many African bishops really agree with Sachs about birth control, but there are certainly important figures that reside in Rome” (that do). “This is why the words recently pronounced by Bishop Sorondo are still more disturbing and worrying,” Cascioli concluded, recounting what the close adviser of Pope Francis has stated at public appearances: “We can say – he said – that we now have a ‘magic moment.’ Because for the first time and perhaps the last time, the speech of the Church and the speech of the world as represented by the United Nations have some synergy.”