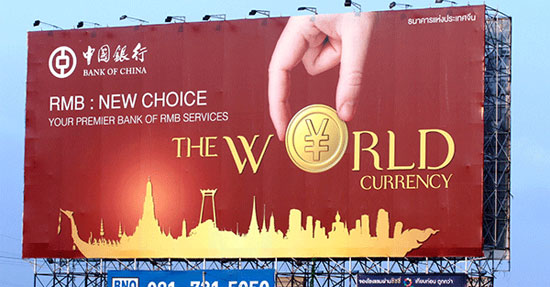 “It is a strategic move swapping Crude Oil for Gold, rather than for US Treasuries, which can be printed at will.” – Grant Williams

A report released by the Nikkei Asian Review indicates that China is prepared to release a RMB Yuan denominated Crude Oil futures contract that is convertible, aka backed by physical Gold.

The contract will enable China’s largest Crude Oil suppliers to settle Crude Oil sales in RMB Yuan, rather than in USDs, and then convert the RMB Yuan into Gold on exchanges in Hong Kong and Shanghai. This is a significant step in removing the global reserve currency status of USD, and resetting the global economic and geopolitical “landscape.”

Over the past several years, China has quietly established RMB Yuan-based currency exchange facilities, which has set up the ability to implement this new non-USD trade settlement financial instrument.

According to the Brookings Institute, 34 Central Banks around the world have signed bi-lateral local currency swap agreements with the PBOC (Peoples Bank of China) as of the end of September 2016, including the major Crude Oil-producing countries.

With this new contract, China’s largest Crude Oil suppliers will now be able to transact directly with China, and other Crude Oil importing countries, using RMB Yuan which are directly convertible into Gold to settle the trade.
This is a mechanism which is likely to appeal to Crude Oil producers that prefer to avoid using USDs, and are not ready to accept that being paid in RMB Yuan for Crude Oil sales to China is a good idea yet.

Since 1973, OPEC Crude Oil has been quoted and traded using USDs, otherwise known as “Petrodollars.”
The “recycling” of petrodollars into US Treasuries has been the life-blood of the US economic and political system. In addition to reducing a major source of funding for the US Government’s enormous deficit spending, the introduction of a Gold-backed RMB Yuan Crude Oil futures contract is an important step toward removing the USD as the world’s reserve currency. More significantly it re-introduces Gold into the global monetary system. As the new Gold-backed “Petroyuan” will allow Crude Oil producers to sell Crude Oil for Gold rather than US Treasuries.