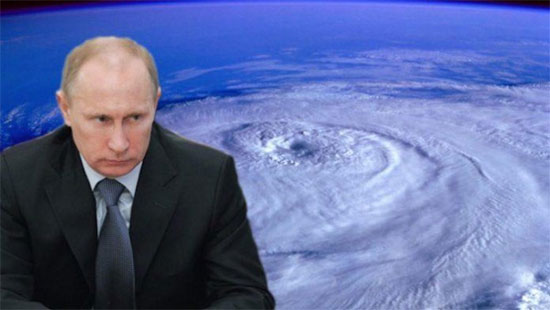 Russian President Vladimir Putin has named the date he plans to release proof that the US government engineered the recent spate of hurricanes that devastated large parts of the U.S.

Like a boxer confident in his own strength, Putin has been observing footage taken from the Russian Elektro-L No.1 weather satellite – and has been biding his time, waiting for the right moment to go public with his findings.

According to Kremlin insiders, this Christmas Putin will release the satellite footage that conclusively proves Hurricane Irma and Harvey, as well as other extreme weather observed around the United States recently, were engineered by people within the U.S. intelligence agencies.

“The destruction caused by those storms was orchestrated by the Deep State who, like on 9/11, wanted to inflict suffering and pain on the American people.”
The US government’s true nature will be exposed on the world’s stage, undermining the credibility of the nation.
Putin is willing to take on the dark forces of the New World Order and attempt to defeat them.

Was HAARP Responsible For The Recent Hurricanes?

Putin’s claims that the hurricanes were man-made may sound far-fetched, but geoengineering is a well-established practise. One of the world’s leading scientists, Dr. Michio Kaku, recently admitted on live television that the U.S. government have long had the ability to artificially induce hurricanes, earthquakes, tsunamis and major storms.

In an interview aired by CBS, Dr. Kaku admitted that recent “man-made” hurricanes have been the result of a government weather modification program in which the skies were sprayed with nano particles and storms then “activated” through the use of “lasers”.

The High-Frequency Active Auroral Research Program (HAARP) was created in the early 1990s as part of an ionospheric research program jointly funded by the U.S. Air Force, the U.S. Navy, the University of Alaska Fairbanks, and the Defence Advanced Research Projects Agency (DARPA).

HAARP is capable of “weaponizing” the weather and has the ability to trigger hurricanes, droughts, floods and earthquakes.