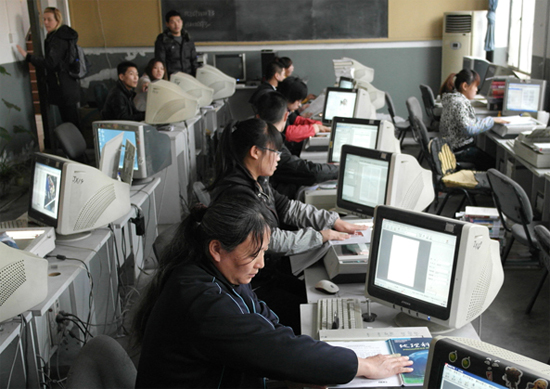 China’s SkyNet facial recognition tools can compare up to 3 billion faces per second to help the government enforce its new “social credit score” – the Communist Party’s latest and most widespread tool of political repression.
And now, private companies are being encouraged to go beyond surface recognition and peer into their workers’ brains as they deploy new brain scanners that monitor abnormalities in emotions and thought patterns.

Data scientists monitoring brain waves on the other end detect spikes in anger, anxiety or depression. When one is detected, the worker being monitored is asked by management to take the day off, or to move to a less-important role, according to the South China Morning Post.

Jin Jia, associate professor of brain science and cognitive psychology at Ningbo University’s business school, said a highly emotional employee in a key post could affect an entire production line, jeopardizing his or her own safety as well as that of others.
“When the system issues a warning, the manager asks the worker to take a day off or move to a less critical post. Some jobs require high concentration. There is no room for a mistake”, she said.

The SCMP trumpeted the technology’s profit-boosting powers, quoting managers at several firms who claimed the technology had saved them hundreds of million – if not billions – of yuan by helping workers avoid mistakes.

The technology is also in use at in Hangzhou at State Grid Zhejiang Electric Power, where it has boosted company profits by about 2 billion yuan ($315 million) since it was rolled out in 2014, according to Cheng Jingzhou, an official overseeing the company’s emotional surveillance program.
“There is no doubt about its effect”, Cheng said.

The company and its roughly 40,000 employees manage the power supply and distribution network to homes and businesses across the province, a task that Cheng said they were able to do to higher standards thanks to the surveillance technology.
But he refused to offer more details about the program.

Zhao Binjian, a manger of Ningbo Shenyang Logistics, said the company was using the devices mainly to train new employees. The brain sensors were integrated in virtual reality headsets to simulate different scenarios in the work environment.
“It has significantly reduced the number of mistakes made by our workers” Zhao said, because of “improved understanding” between the employees and company.

One researcher said that while employees were initially suspicious of the brainwave-reading helmets, they’ve managed to adjust to the new technology.
“They thought we could read their mind. This caused some discomfort and resistance in the beginning” she said.
“After a while they got used to the device. It looked and felt just like a safety helmet. They wore it all day at work.”

Deayea, a technology company in Shanghai, said its brain monitoring devices were worn regularly by train drivers working on the Beijing-Shanghai high-speed rail line, one of the busiest of its kind in the world.
The sensors, built in the brim of the driver’s hat, could measure various types of brain activities, including fatigue and attention loss with an accuracy of more than 90 percent, according to the company’s website.
If the driver dozed off, for instance, the cap would trigger an alarm in the cabin to wake him up.

Zheng Xingwu, a professor of management at the Civil Aviation University of China, said China could be the first country in the world to introduce the brain surveillance device into pilots’ cockpits.

Most airline accidents were caused by human factors and a pilot in a disturbed emotional state could put an entire plane at risk, he said.
Putting the cap on before take-off would give airlines more information to determine whether a pilot was fit to fly, Zheng said.
“The influence of the government on airlines and pilots in China is probably larger than in many other countries. If the authorities make up their mind to bring the device into the cockpit, I don’t think they can be stopped” he said.
“That means the pilots may need to sacrifice some of their privacy for the sake of public safety.”

Qiao Zhian, professor of management psychology at Beijing Normal University, said that while the devices could make businesses more competitive the technology could also be abused by companies to control minds and infringe privacy, raising the specter of “thought police”.

Brainwave-reading technology is available in the West and in much of the developing world, the SCMP said. But nowhere has it been put to greater use than in China, where it has become a staple in the workplace. In the West, the technology is typically used as a training tool for competitive athletes.

At some point in the near future, the helmet-like brain scanners could enable the wearer to give commands to machinery or other devices by accessing a “mental keyboard” – effectively allowing workers to control a computer or mobile phone or perhaps another piece of equipment with their thoughts.

The technology has also been used by China’s military, but in a way that is apparently deeply classified.
In addition to the helmet that measures brainwaves, some employers also use cameras to scan workers faces for signs of emotional stress.

Brain scanners are also being used in medicine in China, particularly in psychiatry, where it’s being used to monitor for signs of a coming emotional outburst.

But while the technology has reportedly led to many benefits involving productivity, one source quoted in the SCMP pointed out the ease with which it could be abused to create a kind of Orwellian “thought police”. And given China’s famously weak worker protections (a tremendous irony considering its communist roots) employees have little recourse to hold employers accountable.

“The selling of Facebook data is bad enough. Brain surveillance can take privacy abuse to a whole new level.”
Lawmakers should act now to limit the use of emotion surveillance and give workers more bargaining power to protect their interests, Qiao said.
“The human mind should not be exploited for profit” he said.

Unfortunately for the Chinese workers, it looks like the chance to stop the technology’s spread has already passed them by. Soon, workers in all manner of professions will be forced to submit to brain scans as a part of their everyday routine. But by then, they’ll have bigger privacy concerns to worry about.

OUTED: DuPont covered up the health risks of Teflon