Children in Syria are dying as a result of measles vaccination campaign instigated by the UN according to UN Children’s Fund (UNICEF). The deaths of at least 15 children have been reported in Idlib, Syria. The children were all under the age of two. Some of the children’s bodies swelled and they suffocated to death following the injection of the vaccine. 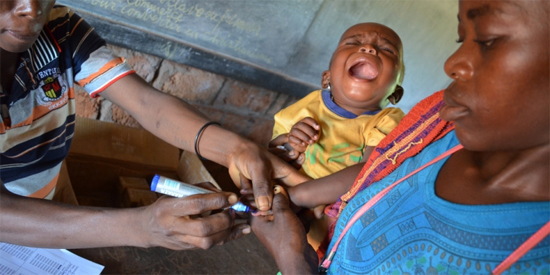 “UNICEF and WHO have been shocked and saddened to learn of the deaths of at least 15 young children in Idlib, Syria” the statement said. “The deaths of the children occurred in areas where a measles immunization campaign had been underway”, RT reports. Around one hour after being given a second round of the measles vaccine in Idlib on May 3 (2018), the children demonstrated signs of “severe allergic shock” said Abdullah Ajaj, a physician administering the vaccinations at a medical center in Jarjanaz, according to AP.

The second round of vaccinations began in Idlib and Deir Ezzour on April 30. Following the vaccine, some of the children’s bodies swelled, and they suffocated to death. “There was shouting and screaming, it was hard for the parents. You get your child vaccinated and then you find your child dying, it’s very hard”, Ajaj said. Conflicting statements from the Syrian opposition and reports from rights groups have put the number of vaccine-related deaths between 34 and 50.

The WHO said it is sending a team of experts to investigate the incidents, adding that “establishing the precise cause of the children’s deaths is vital”. The immunization campaign has been suspended in both Idlib and Deir Ezzour provinces. However, UNICEF and the WHO are hopeful that the campaign could resume “as soon as possible”.

While it is believed that measles outbreaks can effectively be contained by vaccinations, they can be very dangerous in undeveloped areas. The disease is transmitted through bodily fluids, coughing, and tears from the eyes.

UN agencies and other non-government organizations have been providing medical services in Syria since the uprising against President Bashar Assad began in March 2011. The Syrian conflict has since turned into a full-scale civil war, with more than 190,000 people killed, according to UN.

On May 3 (2018), Assad said the fight against terrorism must begin by placing more pressure on countries which are supporting and financing insurgents in Syria and Iraq. Meanwhile, the US announced that it has plans to take “targeted actions against ISIS (Islamic State/ISIL) safe havens in Syria” including striking infrastructure. US Defense Secretary Chuck Hagel unveiled a plan to boost Iraqi forces with 1,600 US “military advisers”. The US will also train and equip 5,000 members of the Syrian opposition to fight militants from the Islamic State group.