CIA and Pentagon behind ‘over 800 major movies and more than 1,000 TV titles’ 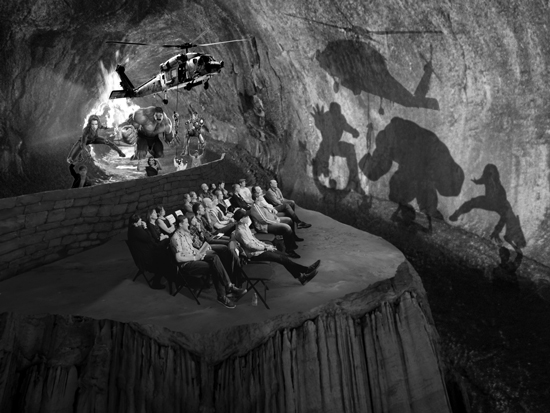 According to a recent document obtained under the Freedom of Information Act, the CIA and the Pentagon have tirelessly “worked behind the scenes on over 800 major movies and more than 1,000 TV titles”.

That is quite a huge number. Researchers, scholars and writers of various stripes have known for years that the US government has been penetrating the film industry for years, but investigators were completely shocked to realize that it was a lot more than they previously thought.

Movies like Transformers, James Bond, Hulk (2003), Top Gun, Act of Valor, Zero Dark Thirty, and TV shows like Hawaii Five-O, America’s Got Talent, Oprah, Jay Leno, Cupcake Wars, documentaries by the PBS, the History Channel, and even the BBC, have all been influenced by the CIA and the Pentagon.

National Security Cinema reveals how dozens of films and TV shows have been supported and influenced by the CIA, including the James Bond adventure Thunderball, the Tom Clancy thriller Patriot Games and more recent films, including Meet the Parents and Salt.

When a writer or producer approaches the Pentagon and asks for access to military assets to help make their film, they have to submit their script to the entertainment liaison offices for vetting. Ultimately, the man with the final say is the Department of Defense’s (DOD) chief Hollywood liaison.

If there are characters, action or dialogue that the DOD don’t approve of then the film-maker has to make changes to accommodate the military’s demands. If they refuse then the Pentagon packs up its toys and goes home. To obtain full cooperation the producers have to sign contracts  –  Production Assistance Agreements  –  which lock them into using a military-approved version of the script.

On set at Edwards Air Force base during the filming of Iron Man, there was an angry confrontation between the DOD chief for Hollywood and director Jon Favreau.

Why are the Pentagon and the CIA using film to influence the masses? Simple: “This idea of using cinema to pin the blame for problems on isolated rogue agents or bad apples, thus avoiding any notion of systemic, institutional or criminal responsibility, is right out of the CIA/DOD’s playbook.”

Who are the victims in nearly all these movies? Who are the terrorists? The Palestinians and the Arabs. In fact, movies like Iron Man are part of a Jewish concept known as the golem. In Jewish folklore, a golem is a Frankensteinian monster brought to life to strike out at all perceived enemies of the Jewish people. The New Jewish Encyclopedia declares that this inanimate character can be “given artificial life with the aid of magic or the use of a Divine name. The concept of the Golem as an artificially created human being by supernatural means was widely accepted during the Middle Ages.

According to the legend, the most famous Golem was created in the 16th century by Judah Low of Prague, one of the great rabbis. The express purpose of these living automatons was to protect the Jews from menacing dangers. Jewish folklore has numerous Golem stories, and several modern literary works have been written on that theme.”

Jewish professor Alon Raab tells us that “the Golem never failed to come to the rescue of his people when danger lurked, battling everyone from Yasser Arafat to space invaders”. Eleventh-century Talmudic scholar Rashi taught that “the golem was created by combining the letters of God’s name as revealed in the Sefer Yetzira [Book of Creation] a seminal kabbalistic text written between the third and sixth centuries C.E.”

This theme of the golem wreaking havoc on all enemies has emboldened Frank Miller and other comic book writers to provoke anything they perceive as a threat to the Jewish people. Journalist Geoff Boucher writes “Much has been made of Miller’s politics in the wake of the movie ‘300’. The deliriously violent and stylized sword film is based on a Spartan battle in 480 B.C., and although Miller wrote and drew the story for Dark Horse comics a decade ago, in film form it was received by many as a grotesque parody of the ancient Persians and a piece for a war on Islam. Miller scoffs at these notions. ‘I think it’s ridiculous that we set aside certain groups and say that we can’t risk offending their ancestors’.”

Miller sees Islam as a threat to the West, one that is not contingent upon Jewish provocation, and thinks that using his graphic skills to make fun of Islam is appropriate. But what if people treated Judaism and the Talmud the same way? Would Miller feel so cavalier then?

No, there would be a loud outcry about anti-Semitism. Can Miller explain this phenomenon? If he does not agree with Talmudic teachings, then why doesn’t he devote equal amounts of time to ridiculing Talmudic ideology? The simple fact is that Miller’s work, like that of Stan Lee, Bob Kane, Joe Shuster, and others, is essentially Talmudic.

Miller’s dedication to taking down anything he sees as a threat to his essentially Talmudic worldview is revealed throughout his work, especially in his graphic novel Sin City, which he brought to the big screen in 2005 in collaboration with Robert Rodriguez (director of El Mariachi and Desperado) and Quentin Tarantino.

Both the book and the movie are laden with nudity, pornography, and pervasive, graphic violence. Miller himself talks about “a clash of civilization” and how “superheroes should be front and center”. He even believes that Jewish comic book writers like himself should use their medium as “the biggest megaphone” and blatantly states, “I am out to provoke”.

What Miller is implicitly saying here is that comic books are weapons that can be used to attack the moral order. And Miller has been using comic books for quite a long time. Miller issued a call to his brethren and fellow writers by saying: “Let’s revive our tradition and get back on the job.”

Well, Miller has been doing exactly that recently. He had a comic book coming out recently entitled Dark Night: The Master Race. It seems like he couldn’t expunge the “master race” idea from his mind, a theme that has been a central focus in Talmudic teachings for centuries.

Miller describes his new comic book Holy Terror: Batman! as “a piece of propaganda”. For Miller, the logic here seems to be simple: revolutionary ideas lead to graphic novels; graphic novels lead to movies; movies lead to propaganda; and propaganda invariably leads to the weakening of the moral and social order. As Eli Roth later puts it, his movies are going to “destroy the minds of an entire generation”.

What if an entire generation doesn’t want to be destroyed mentally? Well, they are going to find themselves squaring with people like Roth and Miller and with thousands of movies and TV shows produced and displayed by the system.