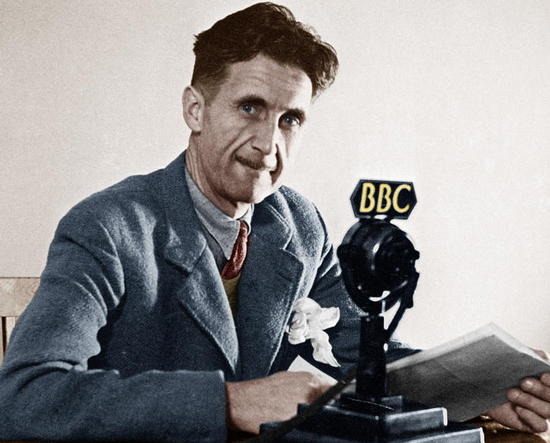 Some argue Orwell’s dystopian vision has finally arrived. George Orwell’s novel 1984 was incredibly popular at the time it was published, and it remains incredibly popular to this day. With multiple stars citing the book as one of their favorites – including Stephen King, David Bowie, Mel Gibson, and Kit Harrington – 1984 has been growing in popularity in recent years. The book reappeared on best-seller lists in early 2017, as some argued Orwell’s dystopian vision had finally arrived. Below are 10 facts you might not know about Orwell’s dark novel.

1. Before he wrote 1984, Orwell worked for the British government during World War II as a propagandist at the BBC. (Perhaps seeing the propaganda industry up close led to his critical portrait in 1984.)

2. Orwell initially named the novel 1980, and then 1982 before settling on 1984. Since it was written in 1948, some think that Orwell devised the title by inverting the year the book was written. Additionally, he thought about naming the novel The Last Man in Europe.

3. While writing the novel, Orwell fought tuberculosis. The disease ultimately consumed him and he died seven months after 1984 was published, with tuberculosis as the sole cause of death.

4. In addition to fighting tuberculosis, Orwell almost died while writing the novel. On a recreational boating trip with his children, he went overboard. Fortunately, neither this episode nor the tuberculosis prevented him from finishing his novel.

6. The slogan “2 + 2 = 5” originated from Russia, where the Communist regime used it as a motto of sorts in an effort to help them accomplish the goals of their five-year plan in only four years. Though the slogan is still used to point out the ills of totalitarian brainwashing today, it was not coined by Orwell.

7. In addition to borrowing a piece of Russian propaganda, Orwell also borrowed some Japanese propaganda for his novel. The “Thought Police” are based on the Japanese wartime secret police who literally arrested Japanese citizens for having “unpatriotic thoughts”. Their official name was the Kempeitai, and they officially named their pursuit the “Thought War”.

8. When Orwell worked as a propagandist for the BBC, there was a conference room there numbered 101. This room was the room of which he based the location for some of his more horrifying scenes, making the scenes themselves all the more horrifying.

9. According to Orwell’s friends and families, his second wife Sonia Brownell was the model off of which he based the love interest (Julia) of the book’s main character, Winston Smith.

10. Though his book may be popular, Orwell’s novel also makes the list of the world’s top ten most frequently banned books. Some ban it for what they claim are pro-communist points of view, and others have banned it because it is anti-communist. Regardless, it is ironic that a book warning against totalitarianism is often an item for censorship.

Enabling Genius: How to Tap into Flow States and Unlock Your Limitless Potential Getting into Flow

CIA and Pentagon behind ‘over 800 major movies and more than 1,000 TV titles’