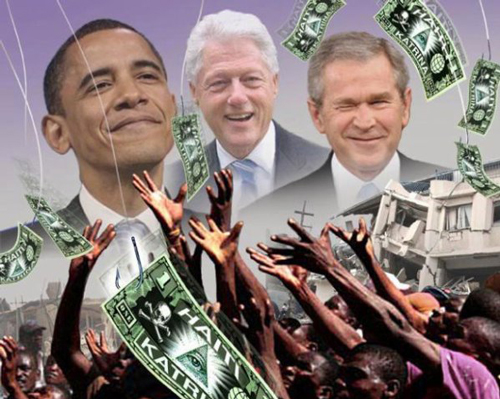 Have you considered the correlation between the Clinton Foundation, World Vision, and CIA/Jesuit Black Ops in Haiti? Or is that simply semantics for more of the same crimes against humanity perpetrated under the illusion of charity to fund a global domination agenda?

My experiences carrying out Black Ops in Haiti under MK Ultra mind control gave me deep insight into the plight of this traumatized nation. Haiti was being used as a testing ground for trauma-based mind control, multi-generational genetic alteration, infestation of AIDs, human trafficking, and an epicenter for CIA cocaine and heroin drug ops.

I know from personal experience on a White House/Pentagon level that mind control is used to enforce actions contrary to innate human nature. Mind control’s sliding scale extends to Psychological Warfare, which is a missing piece of the puzzle that brings the Big Picture into focus as to what in the world is really going on with Haiti.

Several years ago when I learned of Rep Maxine Waters’ deep Haitian political connections, I turned over vast amounts of detailed testimony to her with renewed hopes and expectations of exposing CIA drug ops and helping the plight of the Haitians.

This was not to be the case any more than was Maxine Waters’ handling of Gary Webb’s testimony that inspired the CIA to investigate and clear themselves of drug ops despite over 500,000 documents proving otherwise. This raises questions that demand answers.

Bill Clinton’s infamous Mena cocaine operations that I’d been exposed to since the late 1970’s extended internationally to include Haiti and expanded into related criminal activity such as human trafficking. Bill and Hillary’s complicity in crimes against humanity are rooted deeply with absolute power corrupting absolutely.

The Clintons are no strangers to charities being used as cover for their criminal operations. Charities like World Vision and various Christian “missions” collecting money under the guise of helping Haitians instead notoriously lined pockets while funding black ops.

Churches including the Lord’s Chapel in Brentwood, Tennessee and Hendersonville, Tennessee’s Mormon church are among those “missions” I had experience to know merged with CIA cocaine ops. Like many others, these cult churches sent their mind controlled followers out on “missions” to Haiti as cover for muling (the use of a courier to smuggle drugs) cocaine for the CIA.

When a Lord’s Chapel mind controlled “missionary” was busted for cocaine he was not aware was in his suitcases, the church let him take the fall akin to Roger Clinton’s case. Prison ministries commenced thereafter, making the church appear compassionate the same way Bill Clinton’s pardon of Roger made it appear he cared.

Same game for public appearance, and charities were providing the perfect cover.
During my tenure under MK Ultra mind control carrying out White House/Pentagon level black ops for Shadow Government globalists like the Clintons in the 1980’s, AIDs was deliberately introduced into Haiti through World Vision vaccines.

Hillary Clinton’s perverse sexual abuse of me (detailed in my book Trance-Formation of America) was predicated on her understanding that I was immune from AIDs as necessary for working Haitian black ops. With Bill Clinton’s cocaine operations well entrenched in Haiti, and Hillary’s accepted knowledge of World Vision’s AIDs operations, questions must be raised as to how this interfaces with the Clinton Foundation’s Haitian operations. 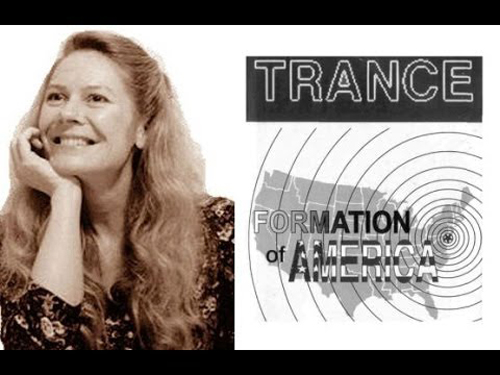 Charities have been used for decades to perpetuate CIA/Jesuit black ops since it is known that anyone emotionally donating to charities does not want to face the reality that their well intentioned money were only used against humanity. Such anticipated natural human reactions are a powerful component of Psychological Warfare.

The Psychic Warfare impact of AIDs genocide reverberates today, changing the very nature of human sexuality as anticipated. With AIDs impacting heterosexual procreation and pedophilia being sanctioned by Shadow Government globalists in order to heighten suggestibility and confuse gender, human sexuality is in crisis.

Understanding why, is key to reclaiming our freedom to evolve as a society unhindered by mind control’s agenda.
Psychic Warfare’s hold on sexuality was deliberately introduced into Global Ed/Common Core. While Bill Clinton claimed the office of President, “Gay Celebration” month was forced into the school system, transgender bathrooms would have become the norm under Hillary had this plan not been derailed this past election.

Why confuse sexuality and inhibit procreation? Why genetically ‘cleanse’ through AIDs? It was my experience under mind control to have overheard much discussion regarding genetic engineering and cloning to replace natural procreation in order to accelerate intellect to keep up with AI (artificial intelligence).

It was also my experience that Bush Sr. adhered to Hitler/Himmler research that sexually abusing a child would heighten their suggestibility and intelligence in accordance with creating the perfect race. This formula was used on his own son for Presidential placement to ensure the 100 year plan for global domination was ushered in.

I was present during his discussion on this with close friend Bill Clinton at the Swiss Villa compound as detailed in my books, Trance-Formation of America and Access Denied. My young, programmed daughter Kelly and I were being perversely used for covert filming/blackmail purposes at this Swiss Villa event.

When Bill Clinton stopped Bush’s intent to covertly film him with my daughter, he further stated sexually abusing his child was not necessary when genetics were already in place to perpetuate the New World Order agenda.

Regardless, both Bush and Clinton adhered to means of overriding innate free thought soul expression in favor of robotic compliance to their global agenda. Clinton’s denial of incest with Chelsea combined with stopping sex with my daughter, albeit for the cameras, formed my perception that pedophilia was not his personal perversion at that time.

Given the reality of the Clintons’ involvement in drug ops and human trafficking, my formed perception is certainly not conclusive. Perpetrator’s perversions notoriously extended past bi-sexual to “tri-sexual” – meaning they would ‘try’ anything including children. Additionally, my daughter’s memory and subsequent testimony as to her personal exposure to the Clintons on this and other occasions was deliberately disrupted while she was a political prisoner in custody at Vanderbilt.

Reverberations of Psychic Warfare that began in Haiti under the guise of charities has permeated our society on many levels for decades, even to the point of altering human sexuality.

As more and more truth comes to light in view of Hillary’s defeat, understand that roots of corruption run deep. We-the-people may have plucked the rosebud from the bush this past election, yet we still need to uproot the whole plant, in order to render the thorns ineffective.

Remember that the proverbial road to Hades is paved with good intentions. Rather than contribute to shady charities or rely on governments to act on our behalf, begin personally reaching out to give a hand up to those in need. Dare to care.

And dare to prosecute the Clintons for their complicity in crimes against humanity that have disrupted free thought and altered human evolution. Move beyond their diversionary blame game obstructions and lock Clinton’s up.