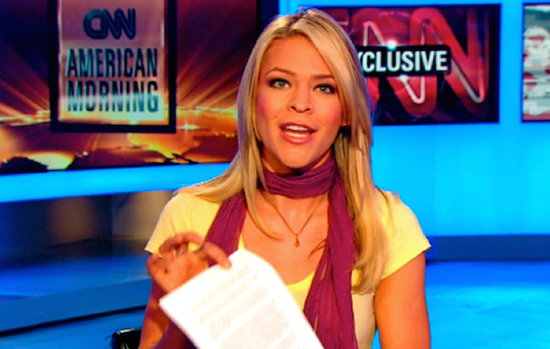 According to Amber Lyon, a three-time Emmy award winning journalist, CNN is routinely paid by the US government and foreign governments to selectively report on certain events. Furthermore, the Obama administration paid CNN for editorial control over some of their content.

Back in March 2011, CNN sent a four person team to Bahrain to cover the Arab Spring. Once there, the crew was the subject of extreme intimidation amongst other things, but they were able to record some fantastic footage. As Glenn Greenwald of the UK’s Guardian writes in a blockbuster article from September 4th 2012:

“In the segment, Lyon interviewed activists as they explicitly described their torture at the hands of government forces, while family members recounted their relatives’ abrupt disappearances. She spoke with government officials justifying the imprisonment of activists. And the segment featured harrowing video footage of regime forces shooting unarmed demonstrators, along with the mass arrests of peaceful protesters. In sum, the early 2011 CNN segment on Bahrain presented one of the starkest reports to date of the brutal repression embraced by the US-backed regime.

Despite these accolades, and despite the dangers their own journalists and their sources endured to produce it, CNN International (CNNi) never broadcast the documentary. Even in the face of numerous inquiries and complaints from their own employees inside CNN, it continued to refuse to broadcast the program or even provide any explanation for the decision. To date, this documentary has never aired on CNNi.

Having returned from Bahrain, Lyon said she ‘saw first-hand that these regime claims were lies, and I couldn’t believe CNN was making me put what I knew to be government lies into my reporting’.”

Here is a segment of the Bahrain report that Amber Lyon and her team put together. CNNi refused to allow it to air because the Bahrain Government had paid them not to show it.

When Amber Lyon recognized the extent of the reasoning, she challenged CNN. CNN told her to be quiet, and began to view her as a risk. She knew, and found out, too much.

Amber is now telling the story, the real story, of what is going on behind the closed doors of US media entities. She has created her own website, and additionally, as noted in the Guardian article, she is pursuing to share the truth of the deceptions.

What Amber Lyon describes is also the exact reason why CNN never aired the Nick Robertson interview with Muhammed Al Zawahiri (brother of one of the Al Qaeda’s leaders) in Egypt. CNN never aired that footage because it completely contradicted the Obama Administration and Hillary Clinton State Department on their Egyptian assertions related to the revolution there. In short, it proved they were lying.

Amber recently did a web interview with Alex Jones on InfoWars.
Alex Jones is easy to disregard as a “conspiracy theorist”, not because of what he says, but because of how he says it. Everything is desperate and dangerous with him. However, that being said, the words and explanations of Ms. Lyon in the discussion/interview are poignant and vastly informative. So here is the video, so you can hear from Amber herself exactly what is being described and articulated.