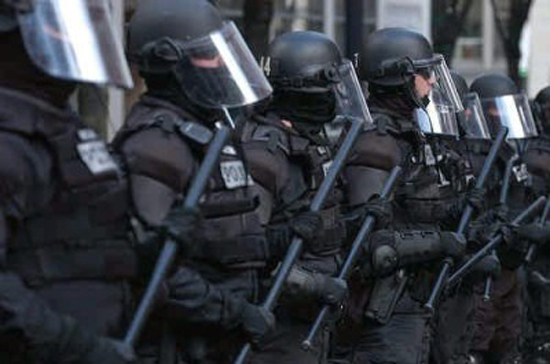 COINTELPRO, which is short for Counter Intelligence Program, was a series of covert, and often illegal, projects conducted by the United States Federal Bureau of Investigation (FBI) during the 1950s and 60s, aimed at surveilling, infiltrating, discrediting, and disrupting American political organizations. Such organizations included ones deemed “subversive,” including Civil Rights activists, the Black Panthers, anti-Vietnam war organizers, the KKK, white supremacists groups, and many more.

Although the FBI wants you to believe that these covert projects have ended as of 1971, this is FAR from the case.

REX 84, also titled Readiness Exercise 1984, was a plan involving FEMA, in association with 34 other federal civil departments and agencies, along with other NATO nations, conducted a civil readiness exercise during the spring of 1984. It was conducted in coordination and simultaneously with a Joint Chiefs exercise, Night Train 84, a worldwide military command post exercise (including Continental U.S. Forces or CONUS) based on multi-emergency scenarios operating both abroad and at home. In the combined exercise, Rex-84 Bravo, FEMA and DOD led the other federal agencies and departments, including the CIA, Secret Service, Treasury, FBI, and the Veterans Administration through a gaming exercise to test military assistance in civil defense. It was originally revealed during the Iran-Contra Hearings in 1987, and subsequently reported by the Miami Herald back on July 5th, 1987. This plan called for the detainee of “illegal aliens” in detention centers via FEMA — the principal vehicle for martial law.

As a result of COINTELPRO and Controlled Opposition, We The People are educated/indoctrinated into ignorance, and choose to remain victims of this compound-crime until a forthcoming critical mass of us learn the freeing truth after it becomes painfully obvious. This is why the root cause of what ails us is the COINTELPRO – a psychological operation by organized criminals producing “controlled opposition” throughout society, disabling society. This treason is administered through grass-roots organizations and institutions by the agents of deception; including a few of these exposed below.

Similarly, Operation Garden Plot is a general U.S. Army and National Guard plan to respond to major domestic civil disturbances within the United States. The plan was developed in response to the civil disorders of the 1960s and is now under the control of the U.S. Northern Command (NORTHCOM). This Plot provides Federal military and law enforcement assistance to local governments during times of major civil disturbances.

Connect COINTELPRO with Operation Garden Plot and REX 84, and there is something deeper beneath the surface.

Because the FBI also released a document entitled Project Megiddo, wherein the FBI conducted a strategic assessment of the potential for domestic terrorism in the United States undertaken in anticipation of or response to the arrival of the new millennium… But could this “new millennium” really be the arrival of the “New World?”

The genocidal depopulation plan generally involves poisoning or sterilizing people through the use of chemtrails or water fluoridation. Agribusinesses transnational like Monsanto are often implicated in some sort of scheme to monopolize the world’s food supply so it can be easily tainted with deadly toxins. Just about anything that can be said to involve “chemicals” can be implicated in this nefarious scheme: vaccines, alleged covert geo-engineering schemes, genetically modified food, etc. Variants of the theory include those with an anti-abortion tinge who incorporate conspiracy theories about Planned Parenthood, and AIDS conspiracy theorists who believe AIDS was concocted in a laboratory for the purpose of reducing the population. Another variant, largely attributable to Lyndon La Roche, has worldwide nuclear war as part of the conspirators’ alleged plan along with a deliberate economic collapse and de-industrialization to force the world back into a “new dark age.” 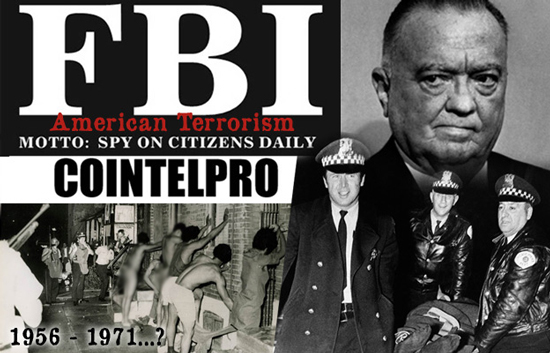 According to attorney Brian Glick in his book War at Home, the FBI used four main methods during COINTELPRO:

Infiltration: Agents and informers did not merely spy on political activists. Their main purpose was to discredit and disrupt. Their very presence served to undermine trust and scare off potential supporters. The FBI and police exploited this fear to smear genuine activists as agents.

Psychological warfare: The FBI and police used myriad “dirty tricks” to undermine progressive movements. They planted false media stories and published bogus leaflets and other publications in the name of targeted groups. They forged correspondence, sent anonymous letters, and made anonymous telephone calls. They spread misinformation about meetings and events, set up pseudo movement groups run by government agents, and manipulated or strong-armed parents, employers, landlords, school officials and others to cause trouble for activists. They used bad-jacketing to create suspicion about targeted activists, sometimes with lethal consequences.

Harassment via the legal system: The FBI and police abused the legal system to harass dissidents and make them appear to be criminals. Officers of the law gave perjured testimony and presented fabricated evidence as a pretext for false arrests and wrongful imprisonment. They discriminatorily enforced tax laws and other government regulations and used conspicuous surveillance, “investigative” interviews, and grand jury subpoenas in an effort to intimidate activists and silence their supporters.

Illegal force: The FBI conspired with local police departments to threaten dissidents; to conduct illegal break-ins in order to search dissident homes; and to commit vandalism, assaults, beatings and assassinations. The object was to frighten or eliminate dissidents and disrupt their movements.

Then there’s the King Alfred Plan, which was first introduced in John Williams’ 1967 novel entitled The Man Who Cried I Am, outlining the life and death of author Richard Wright. This Plan was a fictional CIA-led scheme supporting an international effort to eliminate peoples of color in urbanized neighborhoods via concentration camps. 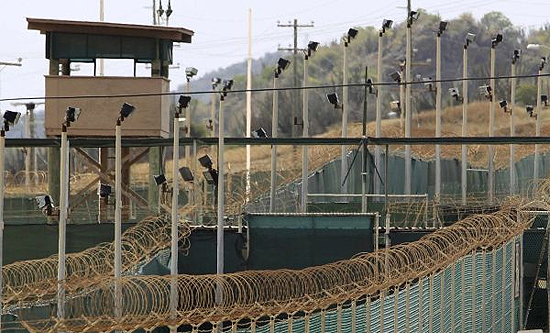 Williams compares the King Alfred Plan to intelligence programs devised by J. Edgar Hoover in the 1960s to monitor the movements of Black activist groups, and, like popular dystopian novels such as 1984 and Brave New World… it turns out to be far from fiction.

Ironically enough, the King Alfred Plan is very reminiscent to the McCarran Act, also known as the Internal Security Act Of 1950 — wherein political subversives were to be rounded up and placed in concentrations camps during a national emergency. And with all the [unconstitutional] Executive Orders supporting such a scheme, one has to wonder: Who are these “political subversives” referring to?

As you can see, the time has almost come!!!

What it’s taught about history in American schools is not history, but a fairy tale. Better yet, it is propaganda designed to hoodwink an unsuspecting society about its true heritage and the treasonous acts and sabotage that were conceived in order to bring about a New World Order. You are about to learn the real identities of those who have infiltrated your nation on behalf of secret societies intent on bringing about the total slavery of mankind. In the past, others have written about the numerous conspiracies to control natural resources, energy, food and our sovereign right to live on planet Earth — not as slaves of a wealthy few — but as free men, women, and children exercising the free will given to them by God.

Imagine you were a member of a secret organization whose sole agenda was to control the entire planet. If your plan was to accomplish this goal without being perceived by your intended victims, discretion would be paramount. Your organization would devise a series of historical events that, on the surface, would appear to be everyday, happenstance occurrences (natural disasters, man-made diseases, acts of murder, assassination, terror, manipulation of money and energy supplies, contamination of foods, pollution of natural resources, and war). The timing of these events would require patience, careful planning, and cooperation from others in positions of trust, stealth and deceit. In essence, the whole mission must derive its power through deception and concealment and must have a master plan.