Commander-In-Chief Donald Trump Will Have Terrifying Powers. Thanks, Obama! 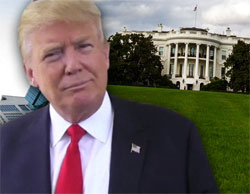 When Donald Trump becomes commander in chief in January 2017, he will take on presidential powers that have never been more expansive and unchecked.
He’ll control an unaccountable drone program, and the prison at Guantanamo Bay. His FBI, including a network of 15,000 paid informants, already has a record of spying on mosques and activists, and his NSA’s surveillance empire is ubiquitous and governed by arcane rules, most of which remain secret. He will inherit bombing campaigns in seven Muslim countries, the de facto ability to declare war unilaterally, and a massive nuclear arsenal – much of which is on hair-trigger alert.

Caught off guard by Hillary Clinton’s election defeat, Democrats who defended these powers under President Obama may suddenly be having second thoughts as the White House gets handed over to a man they described – with good reason – as “unhinged,” and “dangerously unfit”.

In the years after the 9/11 terror attacks, Vice President Dick Cheney and his legal adviser David Addington dramatically expanded the powers of the presidency, asserting the unilateral right in wartime to ignore legal limits on things like torture and government eavesdropping. Congressional Democrats generally caved, but made a few efforts to push back.

The Democrats went silent on executive overreach when Obama was elected, however.
When the New York Times revealed Bush’s warrantless wiretapping program in 2005, 60 percent of registered Democrats thought the program was “unacceptable”. But after NSA whistleblower Edward Snowden revealed a dramatically larger surveillance apparatus in 2013, a 61 percent of Democrats said the opposite – presumably because they trusted the man in charge. 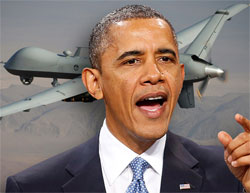 The Obama administration has counted on that trust repeatedly. When defending the drone program in 2012, instead of referencing its legal standards, administration officials reassured the New York Times that Obama is “a student of the writings on war by Augustine and Thomas Aquinas”, and that CIA director John Brennan is like “a priest with extremely strong moral values who was suddenly charged with leading a war”.

After eight years of trusting the President with expanding military power, liberals must now reckon with the fact that Obama will pass the same capabilities to a man who has proposed killing terrorists’ innocent family members, who has said he would do “a hell of a lot worse than waterboarding”, and who has suggested dipping bullets in pigs’ blood is sound counterterrorism strategy.

And most of the paltry few legal limitations that regulate the security state could easily be repealed by a President Trump.
In 2015, for instance, in response to protests in Ferguson, Mo., Obama signed an order banning the transfers of certain surplus military weapons to police, including armored vehicles, grenade launchers, bayonets, and high-caliber ammunition. Trump, who has called police the “most mistreated people in America”, and has refused to criticize police for brutality or killings, could easily revoke that ban.

Trump has said he would create “a deportation force” – apparently ignorant of the fact that he’ll inherit one. Obama has increased the budget for immigration enforcement and accelerated the rate of deportations. Obama has deported more than 2.5 million people – already more than any other President – and has made the Department of Homeland Security the largest law enforcement agency in the country.
Obama also already incarcerates hundreds of thousands of immigrants in detention centers, and forces young children to appear before immigration judges without a lawyer. 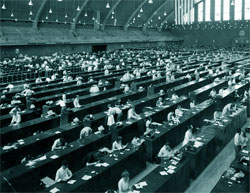 Trump will also take over the FBI, which has 35,000 employees and a network of 15,000 paid informants. Trump, who has said Muslim Americans should be forced to register on a government list, could easily rewrite its investigative guidelines.
As for the NSA, Congress passed a law in 2015 ending the bulk collection of Americans’ phone records and replaced it with a modified program. But according to a former State Department official, the phone records program is minuscule compared to the government’s “universe of collection” under Executive Order 12333, which Trump is free to reinterpret or modify.

To make matters worse, the Obama administration has convinced courts that citizens cannot challenge the legality of NSA programs until they can prove they are under surveillance. Because government secrecy makes that generally impossible, courts have started to reject anti-surveillance lawsuits on procedural grounds.

Trump may also get his wish to “fill up” Guantanamo Bay. Despite Obama’s efforts this year to rapidly depopulate the prison camp, 60 prisoners remain, along with the architecture to imprison hundreds more.
With an additional stroke of his pen, Trump could reopen the global network of CIA “black sites” and imprison people there without any due process. After the Supreme Court ruled under Bush that Guantanamo detainees have rights under habeas corpus, the Obama administration in 2009 fought to avoid having the same rule applied to military prisons around the world.

Trump could also make good on his promise to resurrect the CIA’s torture program with a “hell of a lot worse than waterboarding”, despite the fact that it would be clearly illegal under a law passed by Congress in 2015. Trump said he would “expand the laws”, but he could probably get away with it regardless, because by refusing to prosecute any CIA officials involved in Bush-era torture, Obama made clear that presidents can get away with illegal torture. 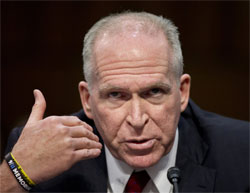 During Trump’s campaign, former CIA director Michael Hayden and current CIA director John Brennan both insisted that CIA officials would disobey any order to commit “torture”. But both have defended the CIA practices, and while Brennan has said he would refuse to engage in “some of these tactics”, he has defended others as useful. Under Brennan, the CIA has also fought to undermine oversight efforts, and has publicly contested the results of an exhaustive Senate investigation into their abuses.

Trump, who has said he would “bomb the shit” out of terror groups and has proposed killing terrorists’ innocent families, will also inherit a global, unaccountable program of drone assassination. Obama started a vast escalation of Bush’s drone program in 2009, and Democrats have trusted him to assassinate people he deems an “imminent threat”, even when they are far away from war zones, and when he doesn’t even know who he is killing.

Obama made it look like he was reining in the program in May 2013, signing guidelines that required “near certainty that a terrorist target is present”, and “near certainty that non-combatants will not be injured or killed”. But a number of disastrous strikes in the following years – including one on a wedding party in Yemen – have led many to believe the administration is not following its own guidelines. And to whatever extent they actually apply, those guidelines could easily be revoked when President Trump gets to decide what is an “imminent threat”, living out his desire to “bomb the shit” out of terror groups.

The Obama administration has also convinced courts that they have no role to play in reviewing the legality of drone strikes – even when it involves killing a U.S. citizen. Lawsuits on behalf of drone victims, filed both before and after strikes took place have all been dismissed, setting the stage for Trump’s targeting decisions never to see their day in court.

When it comes to sustained bombing campaigns, Trump may not have to justify his actions much at all. Obama dramatically reduced the number of ground soldiers in Iraq and Afghanistan, but he has continued to bomb seven countries, with virtually no Congressional acknowledgement or debate. 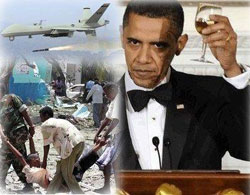 Obama has continued the Presidential tradition of going to war without Congress, sometimes in almost absurd ways. In 2011, for example, the White House needed to argue that it could continue bombing Muammar Gaddafi’s forces in Libya without Congressional authorization. So the top lawyer in the State Department sent a memo to Congress arguing that a bombing campaign did not amount to wartime “hostilities”, mainly because the enemy could not fire back.

Even when the Obama administration sought Congressional authorization in 2013 to strike Syrian President Bashar Hafez al-Assad’s forces in retaliation for using chemical weapons, he insisted that he didn’t really need to. And he has not sought out a separate authorization to extend the war on terror to fight ISIS in Syria, ISIS in Libya, Al Shabaab in Somalia, or Boko Haram in Nigeria.

With such expansive war powers, and armed with the broad, Bush-era 2001 Congressional resolution authorizing war “in order to prevent any future acts of international terrorism”, the next President could conduct military operations on a whim.

And perhaps most alarming is that Trump will inherit a Justice Department that has waged an unprecedented war on press freedom. Rather than shut down the Bush-era office that prosecuted leaks to the press, Obama made it his own, and has prosecuted more than twice as many people under the Espionage Act for leaking information to the press than all of his predecessors combined. His actions met with no resistance from Democrats. 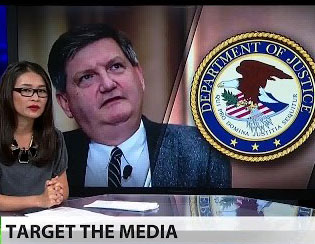 In 2013, Obama’s Justice Department seized the phone records from three Associated Press bureaus to uncover the source for a story. Obama also waged a seven-year legal campaign against New York Times Reporter James Risen, threatening him with prison if he did not reveal his source for a story about a botched CIA operation. The prosecutors dropped the request at the last minute.

The legacy of that system is now passing into the hands of someone who has made a show of his contempt for the media. During his campaign, Trump repeatedly incited crowds against reporters, threatened publications with defamation lawsuits, and expressed his desire to “open up those libel laws”.

President Obama has spent much of his time as commander in chief expanding his own military power, while convincing courts not to limit his detention, surveillance, and assassination capabilities. Most of the new constraints on the security state during the Obama years were self-imposed, and could easily be revoked.

It is too early to tell what Trump will actually do. But if his campaign promises are anything to go on, he will flex all the powers Obama accrued and more, while cutting through Obama’s self-imposed restraints like tissue paper. And the silence of Democrats during the Obama years will play a major role in facilitating his abuses.