Council on Foreign Relations: «Trump is Sabotaging the NWO». Most Direct Revelation of NWO Program and Contempt for Us Goyim ever Seen 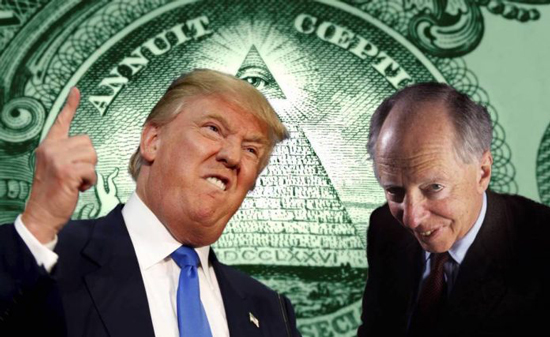 Trump has abdicated responsibility for the world the United States built, and only time will tell the full extent of the damage he will wreak

U.S. President Donald Trump’s every instinct runs counter to the ideas that have underpinned the postwar international system. Trade, alliances, international law, multilateralism, environmental protection, torture, and human rights – on all these core issues, Trump has made pronouncements that, if acted on, would bring to an end the United States’ role as guarantor of the liberal world order.

He has broken with 70 years of tradition by signaling the end of U.S. support for the European Union: endorsing Brexit and making common cause with right-wing European parties that seek to unravel the postwar European project.

In his inaugural address, Trump declared, ‘From this moment on, it’s going to be America first’, and he announced his intention to rethink the central accomplishments of the U.S.-led order – the trade and alliance systems.

Trump describes ‘horrible deals’ and allies that ‘aren’t paying their bills’. His is a vision of a dark and dangerous world in which the United States is besieged by Islamic terrorism, immigrants, and crime as its wealth and confidence fade. In his revisionist narrative, the era of Pax Americana – the period in which the United States wielded the most power on the world stage – is defined above all by national loss and decline.

Trump’s challenge to the liberal order is all the more dangerous because it comes with a casual disrespect for the norms and values of liberal democracy itself. The president has questioned the legitimacy of federal judges, attacked the press, and shown little regard for the Constitution or the rule of law. Facts, evidence, scientific knowledge, due diligence, reasoned discourse – the essential elements of democratic political life – are disparaged daily.

And in February, when asked on Fox News why he respected Russian President Vladimir Putin even though he is ‘a killer’, Trump dismissed 250 years of national ideals and the work of generations of Americans who have strived to reach the moral high ground, responding, ‘What, you think our country’s so innocent?’(!!!)

The profundity of this political moment is greater still because it occurs amid a wider crisis across the liberal democratic world. Liberal democracy itself appears fragile, vulnerable in particular to far-right populism.

In recent years, Western publics have increasingly come to regard the liberal international order not as a source of stability and solidarity among like-minded states but as a global playground for the rich and powerful. Trump is less a cause than a consequence of the failings of liberal democracy. But now that he is in office, his agenda promises to further undermine its foundations.

If the liberal international order is to survive, leaders and constituencies around the world that still support it will need to step up.

Much will rest on the shoulders of Prime Minister Shinzo Abe of Japan and Chancellor Angela Merkel of Germany, the only two leaders of consequence left standing who support it.

Trump’s dark narrative of national decline ignores the great American accomplishment of the twentieth century: the building of the liberal international order. Constructed in the years following World War II, the order is complex and sprawling, organized around economic openness, multilateral institutions, security cooperation, democratic solidarity, and internationalist ideals. For decades, the United States has served as the system’s first citizen, providing leadership.

Trump’s revisionism is dangerous precisely because it attacks the logic that undergirds the United States’ global position. There are voices in the administration – Secretary of Defense James Mattis and National Security Adviser H. R. McMaster – that do not appear to share Trump’s destructive instincts. (The worst Neo-Con war hawks)
Trump disregards internationalism and open trade as well as U.S. global leadership has been the United States’ support for multilateral rules and institutions, and Trump disdains the multicultural and open character of American society.”

That was a cruel volley by a dejected New World Order representative of the Council on Foreign Relations. At the same time, this professor clearly reveals the contents of the NWO: internationalism (Rothschild’s one-world government), plundering and incapacitation of the countries of the world through the TTIP and TTP international trade agreements. He despises us mortals who see these plans as a further playground for the rich and powerful – and he sees the salvation by the worst warmongers of Trump’s government.

He thinks that today’s US has won the moral upper ground in a world that it systematically crushes – the USA behind so many false flags, such as 9/11, 2001.

And he thinks that the US, where media censorship is strict, is the champion of democracy. He does not think it is dangerous that the West is flooded by Muslims – but that Trump is dangerous because he wanted to prevent it once. Now Trump has capitulated and imports more Muslims than Muslim Brotherhood member Obama.

This man fully confirms Henry Makow’s observation: “The NOW creates a false reality, which represents our spiritual enslavement.” Legions of experts, professors, and politicians put their bids through, which is the agency (“agents”) who feel well in The Protocols of the Wise Elders of Zion.