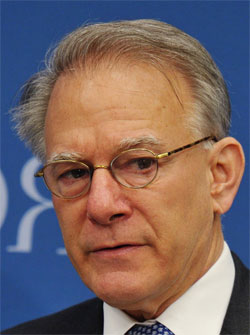 There is universal agreement that President Donald Trump’s “advertisement for himself” in front of CIA’s memorial wall in January was an unmitigated disaster for both the vainglorious president and the Central Intelligence Agency. But there are always favorable reviews to be found. In this case, there were two: one from the president who told ABC’s David Muir that the presentation was “great;” the other from the Washington Post’s long-time apologist-in-chief for the CIA, David Ignatius.

Over the past several decades, Ignatius has defended the CIA’s political assassination program, and argued that no investigation was necessary because “nobody had been killed.” He never condemned the CIA training of death squads in Central America, including Guatemala, Nicaragua, Honduras, and El Salvador. He never deplored the CIA’s Phoenix operation during the Vietnam War, when the agency ran a paramilitary campaign of interrogation, torture, and assassination that targeted many innocent victims. And he never favored accountability for agency operatives who manned the secret prisons, and conducted the program of torture and abuse.

Thus, it is no surprise that Ignatius, writing in the Washington Post on January 23th, welcomed President Trump’s “ingratiating message” after months of attacks on the agency. According to Ignatius, the CIA was tired of having a “kick me” sign on its backside and found it “nice to be massaged.” He made no attempt to assess the danger of trying to co-opt and politicize an intelligence agency that must remain apolitical in order to carry out its mission. And there was no attempt to judge the indignity of CIA officers responding enthusiastically to the president’s harsh political statements, particularly his attacks on the press.

Ignatius even endorsed the self-serving remarks of agency operatives who dismissed the stewardship of former CIA director John Brennan and praised the appointment of CIA director Mike Pompeo. Brennan has never been popular in the directorate of operations because he was an intelligence analyst who received an unusual appointment to be a CIA station chief in Saudi Arabia and, as director, merged the intelligence analysts and clandestine operatives into one bureaucratic organization. He endorsed a paramilitary officer, who stated the visit was “well-received by the worker bees.” He referred to the president’s “rambling braggadocio” as part of his style, but said that “the country (including the CIA) will have to get used to it.”

Although CIA’s unlawful activities during the Iraq War and the Global War on Terror must never be repeated, Ignatius argued in the past that any period of discovery would weaken the CIA and cause serious morale problems. Now that we know that the Trump administration is considering a return to the CIA’s “black site” prisons where suspects were detained and tortured and even re-examining the use of torture, we will need journalists with integrity to keep us informed of the internal political struggle that is already taking place.

The fact that CIA director Pompeo testified he would never carry out an order to conduct torture, but wrote to the committee after the hearing that he wouldn’t rule out reinstating torture “if experts believed current law was an impediment to gathering vital intelligence” is worrisome. We need honest journalists to track such contradictions. Sadly, we cannot count on “journalists” such as Ignatius who apologizes for the CIA in order to gain and protect his access to agency operatives.