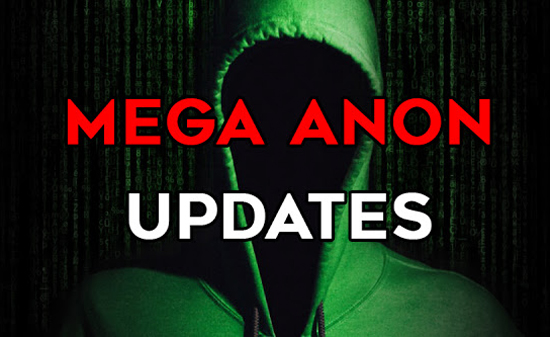 I’ve been (David Wilcock) anticipating mass arrests of a genocidal cabal of world elites since at least 2008, with insider data.
These people literally wanted to kill billions of us, and continue desperately trying to do so. Therefore, some form of mass arrests are absolutely necessary.
We also were getting mysterious, dream-like prophetic data about mass arrests since at least 1999, and possibly as far back as 1996.

In 2017, I began covering the story of Mega Anon, an insider with seemingly close ties to Trump who was also predicting mass arrests in very specific detail.
Here is a link to the Reddit archive of everything she wrote. It is quite extensive and does not have the cryptic qualities of Q Anon.
Unfortunately, it appears that the archived links to what she wrote are now broken. I haven’t checked them all yet.
I do feel I pulled many of the most important quotes from them in my articles.
You can still read a text file with the complete collection of Mega Anon posts in it, at this time, by clicking here.

It is very interesting and revealing to visit the above Reddit link and read the excerpts that this user pulled out from the mass of content.
Mega’s quote from October 6th, 2017 still really stands out:
“The goal is that when it’s all said and done, there will be no room for question, when it comes to the people.
He won’t have to disclose s#!t like 9/11, OKC, Vegas, Voter Fraud, Russia hacks or collusion, elections rigging, etc. specifically.
When he’s done, it will be a literal ‘mic drop’ on the world’s stage.
No one ever again will have the ability to question who’s responsible for, involved in coordinating, etc. ANYTHING that has ever happened and been considered a ‘conspiracy theory’, ever again.
When he’s done, the entire world will just KNOW IT ALL. It really is THAT all-encompassing. Like Trump says, ‘you’ll see’. It just has to happen. We cannot be derailed. Ever again.”

“You don’t have to like Trump. You don’t have to support him and you don’t have to vote for him in 2020. It’s not about Trump. This far precedes him.
Don’t get caught up in the politics of it all because like your opinions, neither of them matter. We don’t have ‘parties’. We don’t ‘elect’ those who represent us.
We don’t have (and haven’t for a VERY long time), the freedom of ‘choice’. (((They))) just let us THINK we do to divide/control us.”

And consider this line from December 15th, under Something Big Is Coming! Comey References Nuremberg:
“I mean, this IS what’s happening. It’s fact. Accept it now and move on.
You don’t need to make this political because (you) don’t like Trump. It’s not about Trump. That’s what they want you to think.
This is about all of them, the dirty establishment and YOU mattering again.
When this is over, you won’t be Democrat, Republican, Independent, etc. You’ll hate them all.”

She eventually reached out to me and spoke to me on several occasions late last year (2017) before cutting off all contact. I do hope she is okay.
It was very clear that she had extensive knowledge of the Alliance plan for mass arrests, and how far back in time it really went.

She wrote it all out on 4Chan, and I was stunned by how much it matched the intel I was receiving from other sources.
She made multiple remarks in our conversations that indicated she had direct, face-to-face access to Donald Trump on multiple occasions.
I presented detailed coverage of her shocking material after the highly suspicious and traumatic Vegas shootings of October 1st, 2017.
Among other things, we heard rumors that POTUS himself was at the hotel in question on that very night, and the shootings were partly intended to stage an assassination that failed.
A good bit of timely investigative material on all of this was released in the Something Very Big is Coming article series, as follows:
Vegas Terror and Disclosure: Is Something Very Big About to Happen? October 11, 2017
Something Very Big is Coming, Part II: Is WikiLeaks About to Drop the Nuke? October 22, 2017
Something Very Big, Part III: Saudi Mass Arrests Sign of Impending Cabal Defeat? November 13, 2017 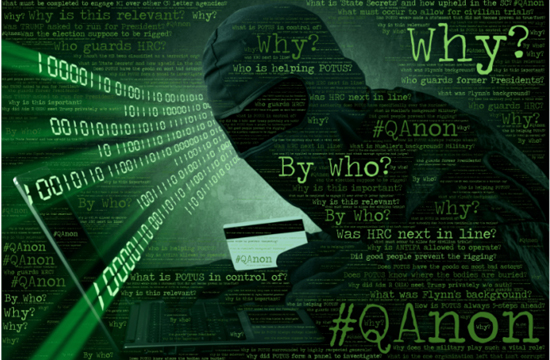 Mega Anon’s work may well have given the Alliance the inspiration it needed to discover a way to communicate securely to the public, as well as to their own covert units.
The first Q Anon posts appeared on 4Chan just seventeen days after I threw Mega Anon’s 4Chan work into the limelight with Is Something Very Big About to Happen?
I must say that I am very, very happy that the Alliance has started communicating their plans openly to the public through the Q Anon posts.
I was aware that these plans were in the works for many, many years, and often felt as if I was one of the only people out there telling you about it.
I have supported the Alliance military and intelligence community in what they are trying to do with this enormously complex operation all along.
That might change if they start trying to justify murdering everyone in the sealed indictments, but again, we also have intel that major prison facilities are being readied.
I wouldn’t care whether a Democrat, Republican or Independent was helping the Alliance. We simply need to see the job get done so our planet can heal.

The Q Anon material is now so vast and extensive, with multiple updates often coming in on a daily basis, that it is way beyond my personal resources of time and energy to research and cover it all.
In fact, I don’t think any one person could properly interpret and present all the Q Anon information at this point as it keeps coming out.
The sheer volume of raw data being put out by Q Anon has led to legions of online journalists putting the pieces together in articles and videos, which is terrific.

Part of my intention in writing this article is to establish the historical context of how long I have been covering this story, along with some of the biggest highlights.
I also wanted to make the point that Obama was apparently working with the Alliance to create disclosure in 2009 as well, and received his own death threats.
This planet-saving effort is therefore not at all a partisan issue. The track record of journalism I have on this site about it makes that point very clear.

The Vegas shootings occurred very soon after the sealed indictments began to be filed. That may not have been a coincidence.
Additionally, the Q Anon briefings began as of October 28th, shortly after the appearance of the masses of sealed indictments had begun.
In the beginning, Q Anon gave an uncharacteristically direct set of text that laid out the blueprint for mass arrests, as I quoted in Something Very Big is Coming, Part III.

Q admitted that they had to put out disinformation at times for operational reasons.
Therefore, the idea that these operations would begin in “the next several days” was incorrect.
However, Mega Anon told us that there was indeed a plan on the books to do the arrests within this exact timeframe, as a reaction to the Vegas atrocities, and they had to be scrapped.
Apart from that glitch, for whatever reason it may have happened, we got a remarkable view of what the mass arrest scenario will be like:

My fellow Americans, over the course of the next several days you will undoubtedly realize that we are taking back our great country (the land of the free) from the evil tyrants that wish to do us harm and destroy the last remaining refuge of shining light.
On POTUS’ order, we have initiated certain fail-safes that shall safeguard the public from the primary fallout which is slated to occur 11.3 upon the arrest announcement of Mr. Podesta (actionable 11.4).

[DW 11/13/17: We are now seeing 50 sealed indictments in Eastern Virginia and another 33 in DC. The Podesta Group is closing down as of November 15th.
It is quite possible that the Podestas and Huma Abedin are in these same sealed indictments, exactly as Q Anon leaked in advance.]

Confirmation (to the public) of what is occurring will then be revealed and will not be openly accepted.
Public riots are being organized in serious numbers in an effort to prevent the arrest and capture of more senior public officials.
On POTUS’ order, a state of temporary military control will be actioned and special ops carried out.

False leaks have been made to retain several within the confines of the United States to prevent extradition and special operator necessity.
Rest assured, the safety and well-being of every man, woman, and child of this country is being exhausted in full.
However, the atmosphere within the country will unfortunately be divided, as so many have fallen for the corrupt and evil narrative that has long been broadcast.

We will be initiating the Emergency Broadcast System (EMS) during this time in an effort to provide a direct message (avoiding the fake news) to all citizens.
Organizations and/or people that wish to do us harm during this time will be met with swift fury.
Certain laws have been pre-lifted to provide our great military the necessary authority to handle and conduct these operations (at home and abroad).

POTUS will be well insulated/ protected on Air Force 1 and abroad (specific locations classified) while these operations are conducted due to the nature of the entrenchment.
It is time to take back our country and make America great again.
Let us salute and pray for the brave men and women in uniform who will undertake this assignment to bring forth peace, unity, and return power to the people.
It is our hope that this message reaches enough people to make a meaningful impact.

We cannot yet telegraph this message through normal methods, for reasons I’m sure everyone here can understand.
Follow the questions from the previous thread(s) and remain calm. The primary targets are within DC and remain at the top (on both sides).
The spillover in the streets will be quickly shut down. Look for more false flags – stay alert, be vigilant, and above all, please pray.
“For God so loved the world that he gave his one and only Son, that whoever believes in him shall not perish but have eternal life. Love is patient, love is kind.”
God bless my fellow Americans.

I want to note something very important here. One of the very first Q briefings said the Emergency Broadcast System would be used to tell the public the truth.
You just read it yourself. This system apparently bypasses all mainstream and social media censorship and control.
On September 6th, 2018, Q Anon posted information that the Emergency Broadcast System was to be tested as of September 20th, 2018: 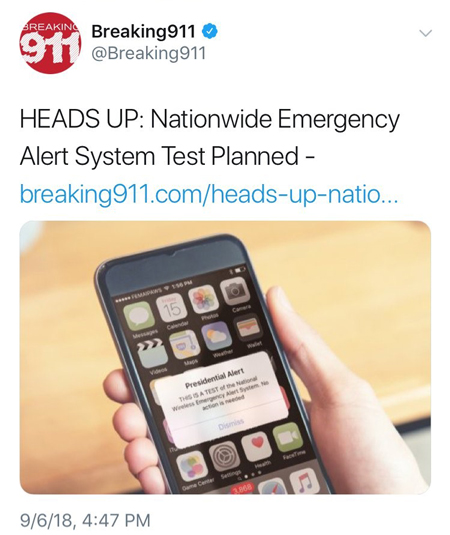 It is easy to miss the text on the phone in the above image, so here it is in a larger form: 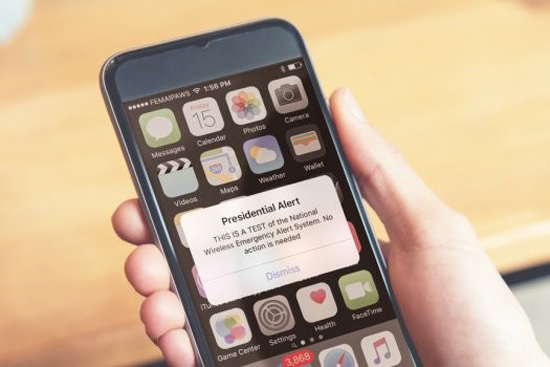 It clearly says “Presidential Alert”. Once you see this in context of the other Q Anon posts – it is either very alarming or exciting, depending upon how you interpret all of this.

Home of scientists who discovered contaminants in vaccines RAIDED; documents confiscated for the ‘good of science’