Depravity, Frivolity, and Dissent: Are We Watching the End of an Empire?

by Daisy Luther
(originally published in 2017)

A 40-year-old essay predicted the end of an empire and current events sure make it look like we’re watching it happen in real time.

I spend a fair bit of time scanning the news every day. And some days, I just have to shake my head as I realize that people are so desperate for something that they just keep going to further and further extremes to try and find that elusive thing their lives are missing.

The more I read, the more likeness I see to Sir John Glubb’s essay, The Fate of Empires and Search for Survival. (It’s only 24 pages and you should definitely read it – it’s brilliant.) Sir Glubb wrote this outstanding work when he was 79 years old, after a lifetime of being a soldier, traveling the world, and analyzing history. It’s well worth a read as he goes into detail about the fall of empires past.

The final stage of the end of an empire is the Age of Decadence. Some signs of this age are political dissensions (like Antifa), an influx of foreigners (Europe), the welfare state (America), despair (350 million people diagnosed), depravity (see below), and the rise of frivolity as people try to fill lives that have less and less meaning. Sounds familiar?

“In the age of decadence many people choose to behave in ways that are unsustainable, apparently unaware of the consequences. They indulge in excessive, often conspicuous, consumption. An absurdly wealthy elite emerges, but instead of repelling the masses it is admired and celebrated. Those outside the elite aspire to similar levels of consumption, and are encouraged by the availability of cheap credit. People become convinced that increased consumption is the key to happiness, but in its pursuit they become measurably less happy. As David Morgan says, ‘you can never get enough of what you don’t need.’

At this point in the life cycle of an empire frivolity, as Glubb calls it, comes to the fore. In order to distract people from what’s really going on, the economy creates diversions. Voyeurism becomes central to culture: the gladiatorial spectacles in decadent Rome are mirrored in today’s ‘reality’ television. People become fixated on celebrity as the genuinely noteworthty become understandably camera shy. These invented celebrities are ‘famous’ just for being famous…

…Debauchery is another recurring theme at the end of empire. Society develops a strangely immature obsession with sex. People drink themselves to the point of unconsciousness and shamelessly collapse in the street. In Roman times, binge drinkers were left to their fate. Today’s debauchery is supervised by the police; its ‘victims’ are taken care of by hard-pressed health care professionals, placing further pressure on the public purse. And, all the while, supermarkets and corporations make a killing selling discounted booze to people barely old enough to buy it. This is our modern-day bread and circus, with obese citizens literally becoming a burden on the state.

But the small can never satisfy the large. Cheap pleasures fail to compensate for the absence of meaning in so many people’s lives. A hankering for something greater remains… growing numbers are denied access to work; they can find no meaningful involvement in their community, so their potential goes unfulfilled. When people are prevented from fulfilling their potential, they often self-destruct.”

By “Empire,” I’m not referring specifically just to the United States in particular, but Western Civilization in general. We’re watching Europe go down the same path. How can anyone look at the following stories and think that we are all fine and that this is sustainable?

Author’s note : The story below isn’t pretty and there is adult content. If you are offended by adult content, take my word for it and do not read on.

Never have America and Europe seen their citizens more at odds. Here in the United States, the last election caused more division than any other in history. Friendships and family relationships ended over people’s voting choices. Once Trump was inaugurated, things didn’t settle down. There are still groups who want to overthrow the “Trump-Pence regime.” Some students can’t even tolerate the existence of those with opposite beliefs.

The education system doesn’t help. Some professors are actually encouraging violent revolt. Californians are talking about seceding from the United States because Trump won.

Chaos is everywhere and there is little middle ground.

Crimes are becoming more horrific and mindboggling. A 17-year-old girl was trying to walk home through a “no-go zone” in the UK and was sexually assaulted three separate times in one hour. A man in Pennsylvania tried to strangle his girlfriend to death because she changed the passcode to the IPad. A Georgia woman murdered her two toddler sons by putting them in the oven and then video-chatted their father.

A Hollywood figure has been accused of assaulting and harassing dozens of women, which led thousands of other women to share their horror stories with a #MeToo hashtag on Twitter. I have seen report after report recently of teachers having sex with their high school students.

Sexuality is being introduced to our children far too early. For example, libraries around the country are having “Drag Queen Story Hour.” A picture is worth a thousand words. 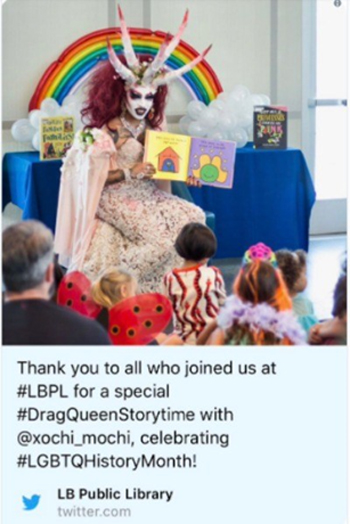 What’s the purpose of this? Here’s a quote from a magazine write up entitled “An amazing demon drag queen has entertained children in Michelle Obama’s library” that explains:

…The Drag Queen Story Hour site explains that the event ‘captures the imagination and play of the gender fluidity of childhood.’

‘In spaces like this, kids are able to see people who defy rigid gender restrictions and imagine a world where people can present as they wish, where dress up is real.’

The programme takes place regularly in LA, New York, and San Francisco, and events are popping up all over the world!”

I actually don’t have an issue with adults who are drag queens – I believe that consenting adults can do what they want. I have not raised my kids to mistreat others because of their sexuality. They’d be in massive trouble if they did. I did, however, manage to teach them to be kind individuals without taking them to Drag Queen Story Hour when they were 3 years old.

Let me be absolutely clear that while I don’t think Drag Queen Story Hour is an attempt to sexually abuse children, it does lead me to the oversexualization of kids. I don’t even know the names of all the genders and sexualities that are being claimed and LBGT keeps adding so many initials, I can’t keep up. No wonder kids are confused. I’m confused and I’m a grown-up.

Decades ago, anything on TV before 9 o’clock PM was pretty innocent. We didn’t have laptops and cell phones that allowed us to learn way too much, way too soon. We didn’t take quizzes on Buzzfeed to see if we were ready to have anal sex that night, and we didn’t turn to Teen Vogue to learn about oral sex. These days, Teen Vogue is racier than Cosmo was in the early 80s. How do we protect our children’s innocence in this environment? How do we let them just be kids and find their own ways? Even in Disney movies, everyone’s got to have a love interest. Why?

Children are exposed to far too much, far too young. This makes them ripe targets for pedophiles. Let me be clear on this too. Pedophilia is always, always wrong and extraordinarily harmful to children.

To make matters worse, there is a sick attempt to normalize pedophilia. Salon magazine had published numerous articles with titles like, “I’m a pedophile but I’m not a monster” which has since been deleted due to the public outcry. There are even forums about “moral pedophilia.” Here’s a quote: “Our website is intended to reduce the stigma attached to pedophilia by letting people know that a substantial number of pedophiles do not molest children, and to provide peer support and information about available resources to help virtuous pedophiles remain law-abiding, and lead happy, productive lives. These are our stories. There are brief bios of the two founders of the site and collections of other personal stories.”

I keep wondering, are the people in charge of media trying to normalize this so that when they inevitably get outed for molesting children, no one will care? Watch this video about the rampant pedophilia in the entertainment industry – and then remember, these are the people who influence the views of the folks who idolize celebrities.

Tony Podesta, the brother of Hillary Clinton’s campaign chairman, was spotlighted for his incredibly disturbing art collection that showed the torture and murder of children. (Here is a shocking post with some other images found using “Tony and Heather Podesta’s art collection” as a search term.) And who can forget that sick “spirit cooking” scandal during the election? There are some things we simply cannot unsee.

The mainstream wants to blame the collapse of civilization on Trump, but they ignore the fact that in this administration, more than 1,500 pedophilia-related arrests took place in the first full month of his presidency. Recently, in just one week, 84 children were rescued from a sex-trafficking ring, with the youngest of those sweet angels being only 3 months old. A THREE-MONTH-OLD BABY WAS FOR SALE FOR $600!!!

Speaking of “art,” a Slovenian woman just won a prestigious art award for being “in seclusion” with her dogs for three months. Of course, for some of us, just hanging with pets sounds awesome, but we don’t hang out with pets like Maja Smrekar does. She breastfed a puppy and fertilized one of her eggs with what she says was a “fat cell” from another of her dogs.

This video that documents her “art” is another thing to add to the “can’t-ever-unsee-it” list. The jury that awarded her the prize said: “What is making this artwork so special is the total commitment of the artist.” Apparently, I just don’t understand art. Or commitment. Or what cool people do with their pets.

They’ve had to make laws in numerous states to combat an apparent uptick in bestiality. One guy was arrested for sneaking into a neighbor’s yard and doing it with their donkey. Numerous times. A lady says she’s literally married to her dog. Numerous other people also claim to have romantic relationships with animals.

Bestiality is actually legal in these US states: Hawaii, Kentucky, Nevada, New Mexico, Ohio, Texas, Vermont, West Virginia and Wyoming, and the District of Columbia. Apparently, parties are organized where people can engage in sex acts with animals. Publicly.

Not to be outdone, this girl is done with humanity altogether and says she now is… a cat.

The emptiness of society 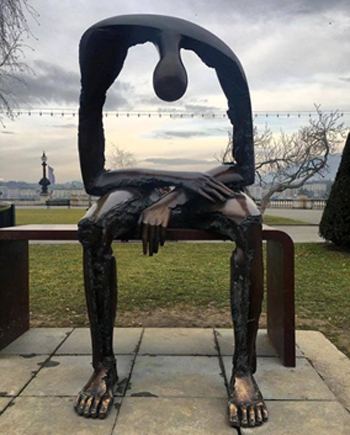 Perhaps people should first examine the depravity and frivolity that passes for art and entertainment these days. A walk in the woods to look at fall leaves will not suffice for much of the population.

People are so desperate for that rush of endorphins that they’re constantly seeking something more and more outrageous to give it to them. Normal things no longer give them that fleeting feeling of joy. Their own lives are so empty that they focus on the lives of people famous for being famous to fill them up.

When society is more interested in reality television than actual reality, how can we expect that same society will be invested in our future?