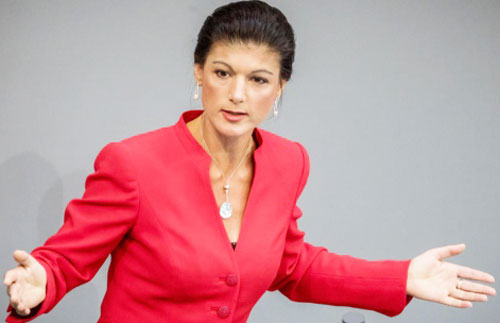 A military security system, which would include Russia, should be set up instead of NATO, Sahra Wagenknecht, leader of the German Left party said in an interview, echoing Trump’s statements on NATO from January.

“NATO must be dissolved and replaced by a collective security system including Russia,” Wagenknecht told Germany’s Funke media group. NATO has received its fair share of criticism in the German media following US President Donald Trump’s interview published by Bild, in which he called NATO an “obsolete” organization.

“I said a long time ago that NATO had problems. Number one it was obsolete, because it was designed many, many years ago” Trump said.
“We’re supposed to protect countries. But a lot of these countries aren’t paying what they’re supposed to be paying, which I think is very unfair to the United States.”

These words were supported by Wagenknecht, who added that his comments “mercilessly reveal the mistakes and failures of the [German] federal government.”

The interview has not gone unnoticed, as a spokesperson of German Chancellor Angela Merkel commented that it was “read with interest” at the Chancellor’s office.
Meanwhile, NATO officials were rather “irritated” by Trump’s statements, according to then German Foreign Minister Frank-Walter Steinmeier (now President of Germany), who talked to reporters after a meeting with NATO Secretary General Jens Stoltenberg. Steinmeier said, however, that NATO is confident that the incoming US administration would keep to their country’s commitments to the alliance.

Alexander Graf Lambsdorff, vice president of the European parliament and member of the German party FDP, told Funke that Trump’s statements “remain vague and not so sound”.
The Left party is the largest opposition group in the German parliament, and has previously called for closer ties with Russia.

The comments came amid the amassing of US troops, tanks, and military equipment in Europe near Russia’s borders as part of a NATO operation called Atlantic Resolve. Following military exercises within the framework of the operation, the soldiers will be distributed among Poland, Bulgaria, Romania, and the Baltic countries, with a headquarters unit in Germany.