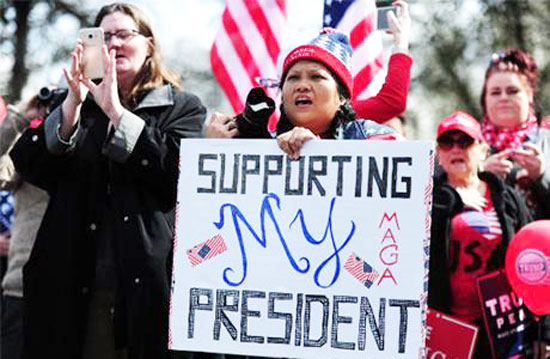 The subject of politics, like religion, is a very sensitive one to most people, which is why it’s best not to talk about either in polite company. Things can certainly become very heated in a very minimal amount of time.

Now, a recent study by the University of Southern California has confirmed what is increasingly noteworthy about US politics: most of Americans are stubborn about their political beliefs, even when they are provided contradictory evidence about what they think.

Neuroscientists at the Brain and Creativity Institute at USC say their findings from the functional MRI study appear to be especially relevant to how people responded to political news stories – fake ones and real ones – throughout the election (though very often the fake stories were published by the old establishment media, not alternative media).

“Political beliefs are like religious beliefs in the respect that both are part of who you are and important for the social circle to which you belong,” said lead author Jonas Kaplan, an assistant research professor of psychology at the Brain and Creativity Institute at USC Dornsife College of Letters, Arts and Sciences. “To consider an alternative view, you would have to consider an alternative version of yourself.”

In order to find out which brain networks respond when a person holds very firmly to a belief or set of ideals, researchers with the Brain and Creativity Institute at the university equated whether and to what extent people change their minds on nonpolitical and political issues when shown contravening evidence.

The neuroscientists found that people exhibited more flexibility when they were requested to analyze the strength of their conviction for nonpolitical statements, like “Albert Einstein was the greatest physicist of the 20th century”.
However, when it came to requests for reconsideration over political beliefs – like whether the U.S. should reduce funding for the military – test subjects would not abandon them.

“I was surprised that people would doubt that Einstein was a great physicist, but this study showed that there are certain realms where we retain flexibility in our beliefs,” said Kaplan, according to a press release from USC.

The study was published in December 2016 in the journal Scientific Reports. Co-authors of the study were Sarah Gimbel of the Brain and CreativityInstitute, and Sam Harris, a neuroscientist from the nonprofit Reason Project in Los Angeles.

Why do we so closely hold on to our political beliefs, even if we’ve been shown contravening evidence that we are wrong? The Free Thought Project notes: “Instead of treating a political subject like a normal debate topic – weighing factual evidence and its relation to other significant realities – it can quickly devolve into an irrational state. Enlightenment is sacrificed as the goal becomes defeating ‘the other’.”

This has been true throughout American history. In the 19th century, for instance, political differences were often highlighted and even exacerbated (with the express purpose of enraging the opposition) through political cartoons (which are still used today). But in addition to the old media, the new media and especially social media are used as platforms for heated debate, with sides often exaggerating their point in order to make their argument stronger – even if the argument is wrong to begin with.

The current political climate is the worst it’s been in most of our lifetimes that is for certain. So-called “identity politics” – political positions based on the interests of social groups people identify with – and political correctness have really poisoned rational discussion. It has made the rancor both former President Obama and President Trump engender from political opponents nearly unprecedented. Some have said it is as bad now as it was prior to the Civil War, when discussion of the topics of the day often brought rage and physical violence.

Worse, the situation today is ripe for exploitation by both sides of the political aisle, with the media playing the biggest role. Americans really have to be careful what they read and what they choose to believe, because, as this study indicates, once they do make up their minds it is virtually impossible to change it, politically speaking.