“The food you eat can either be the safest and the most powerful form of medicine or the slowest form of poison” Ann Wigmore. 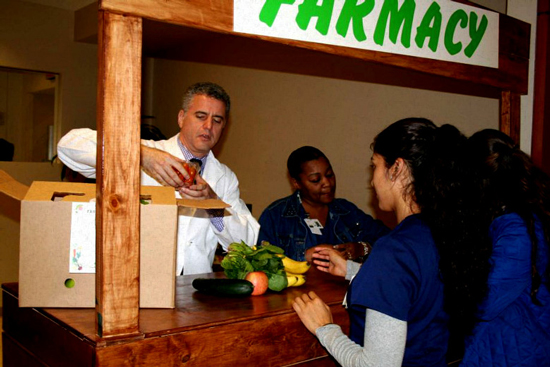 At a reputed medical centre in the US, a unique experiment is on, doing common things in most UN-common way.

Here the patients are being treated with select fruits and vegetables from its Farmacy (Farm) instead of medicines from its Pharmacy.

According to the director of the medical centre the patients have responded positively to this innovative method.

The director added that based on this success story, it is time to create awareness about the efficacy of fresh fruits and vegetables over the conventional approach of treating patients with the pills which inflict a number of side effects on the patient.

At the medical center’s Farmacy, a variety of fruits and vegetables are grown scientifically such as bananas, oranges, apples, carrots and items of green salad at the most economic cost giving deep discounts to inculcate the habit of eating fresh fruits and vegetables direct from the Farmacy, instead of popping pills which not only harms the body but also digs a big hole in the patient’s pocket, leaving him high and dry.

This Farmacy, though unique in many ways is not the only one in the States.
Plant-based wholesome organic foods are the most powerful disease repelling tools and are much more powerful than any drug or surgery. They have proved themselves more effective in preventing chronic heart attacks, strokes, cardiovascular diseases and cancers, claims the spokesperson of the medical center.

On the contrary, “the use of modern medicines and its compounds being manufactured by the Pharma companies have caused many problems to the civil society, both within our country and elsewhereˮ, he added.

“Programms like growing plant based organic foods would go long way in reforming heath care system and keeping a tap on big Pharma stronghold in the heath care market for the benefit of consumersˮ, he claimed.

“Let Food be the Medicine and Medicines be thy Food”, said Hippocrates many centuries ago, but his message forgotten over the time due to commercial considerations.

India too has its own version of Farmacies with Yogic and Ashrams spread across the country actively engaged in rendering advice on heath care problems and farming of quality food stuffs in the form of fruits and vegetables. Their product range include melons, buck wheat, avocados, apples, bananas, oranges, carrots , reddish, items of green salad, garlic, broccolis, papayas, cucumbers.

While some of product range is excellent colon cleaner, others protect heart cardiovascular system and have excellent antioxidants attributes.

They not only help us to be less susceptible to life style disease and illness but have also lead to increase in our life span in much better way than the modern medicines.
These Ashrams are well equipped to advise on various heath care options based on various modern and ancient systems of medical care, including Ayurveda, Yoga and naturopathy, Unani, Siddha and Homeopathy etc. as suitable to the patient.

However, primacy is given to the ancient and time tested systems having Zero side effects.

Today though the life expectancy has increased but the quality of life has not kept its pace with the overall developments and improvements due to many factors including side effects of heavy doses of medicines to keep the life on and on.

In the process, the old and weak are the victims of the prolonged agony and pain in their extended “Death Years”. With prey on their lips, they seek redemption from the prolonged death years, sooner rather than later!

Report: China Is Creating a Database of Its Citizens’ Voices to Boost its Surveillance Capability