Dr. Peter Duesberg: HPV Does Not Cause Cervical Cancer 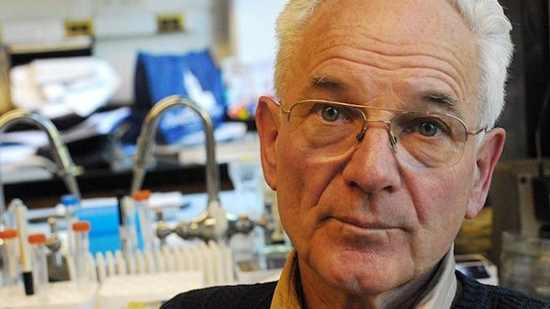 Dr. Peter Duesberg, professor of molecular and cell biology at the University of California, claims that HPV does not cause cervical cancer and has warned that the HPV vaccine is both “useless” and “dangerous”.
In a paper recently published in Molecular Cytogenetic entitled Individual karyotypes at the origins of cervical carcinomas, researchers conclude that the vaccine against human papillomavirus (HPV) is extremely unlikely to protect against cervical cancer.

According to this paper neither genetic predisposition nor HPV infections are necessary for the development of cervical cancer. All cervical cancer cells investigated during the course of this study contained new abnormal karyotypes. The clonality (genetic makeup) of these new abnormal karyotypes indicates the cervical cancers originated with these karyotypes – not from a virus.
In order to grasp the potential significance of these statements, one must have a basic understanding of karyotypes. Most living things have chromosomes, or units of genetic information, in their cells. The number and appearance of chromosomes varies from one species to another. A karyotype is the number, size, and shape of chromosomes in any given organism. 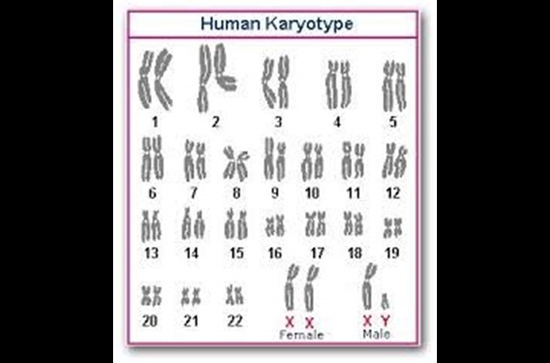 Every human has 23 pairs of chromosomes (46 total) as illustrated, with the last pair on the bottom right determining the sex of any particular human. Any different number would indicate a different species. For example, apes have 48 chromosomes and kangaroos 20. The number, size and shape of the chromosomes in any given cell reveals the species of origin for that cell.

All cancers have individual clonal (cells descended from and genetically identical to the parent cell) karyotypes (number, size and shape of chromosomes) and thus phenotypes (expressed physical traits). No two cancers are the same. The karyotype determines the phenotype via thousands of messenger RNAs (about a thousand per chromosome), which in turn make thousands of proteins – at concentrations that are cancer karyotype-specific – all cancer cells are individually very different from normal cells. In this respect, cancer cells resemble a new cellular species existing within the human body, much like a parasite.

The genes and proteins within cancer cells are expressed at very abnormal concentrations when compared to the normal cells surrounding them. However, since all genes and proteins expressed within cancer cells originated from human cells, cancers are not immunogenic (able to produce an immune response) – despite their huge biological differences from surrounding normal cells. This is the reason the immune system cannot “see” cancers.

Since the new carcinoma karyotypes express thousands of normal genes abnormally they generate numerous new cancer-specific phenotypes that correlate one-to-one with the new karyotypes of cancer cells. Cervical cancer cells are one example.
Think about Down syndrome as a model; one extra small 21 chromosome changes a lot. Cancers typically have 60-70 chromosome variations compared the 46 +1 of Down syndrome.

This hypothesis states that HPV encodes proteins which cause cancers as the virus replicates. Having common transforming proteins, all cervical carcinomas would be more or less the same if this were accurate. Since viral proteins are foreign to humans, viruses, virus-infected cells and possibly virus-transformed tumor cells would inevitably be immunogenic and as such eliminated by the host’s immune system within weeks to months after infection.
This is the reason why HPV-induced warts are eliminated by the immune system within weeks to months after infection.

This hypothesis raises four questions:
1. Why would only 1 in 10,000 HPV-infected women develop cervical cancer?
2. Why would cervical cancers only develop 20 to 50 years after infection? – In other words, why would the virus not cause cancers when it is biochemically active and causing warts, namely before it is neutralized by natural anti-viral immunity?
3. Why are cervical carcinomas individually very distinct from each other in terms of malignancy, drug-resistance, cell histology, as originally described by Papanicolaou et al. in Science in 1952, although they are presumably caused by the same viral proteins?
4. Why are cervical carcinomas that are presumably generated by Human Papillomavirus proteins not immunogenic and thus not eliminated by natural antibodies?

Despite over 25 years of research on the HPV causes cancer hypothesis, there are no direct answers to these questions.
Instead poorly defined “co-factors” are mentioned as “collaborators” of HPV in the causation of carcinomas. Poorly defined cellular mutations are mentioned as the causes of the cervical carcinomas of HPV-negative women.
Moreover, about 30% of cervical cancers are virus-free. In these cases the virus couldn’t even theoretically be responsible for the cancer. 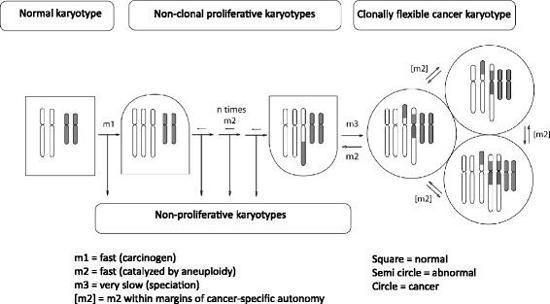 According to this theory karyotypic evolutions generate new cancer species from normal cells after exposure to carcinogens (e.g. cigarette smoke or X-rays) or after spontaneous mitotic accidents. The common function of carcinogens is the induction of aneuploidy (chromosomal disruption, either gains or losses). By unbalancing thousands of genes aneuploidy automatically destabilizes the normal human cell karyotype and thus catalyzes random karyotypic variations. Selections of variants with proliferative phenotypes form nonclonal pre-neoplastic hyperplasias (enhanced growth of non-neoplastic cells in a tissue or an organ) with persistently varying karyotypes. Very rare karyotypic variations form autonomous (capable of replicating without influence from surrounding host cells) new cancer species with individual clonal karyotypes. Cancer karyotypes are stabilized within narrow margins of variation by clonal selections for cancer-specific autonomy. Since this mechanism is very inefficient, it predicts long latent periods from carcinogen exposures to cancers with individual clonal cancer karyotypes.

In agreement with this theory, the authors discovered new, cancer-specific karyotypes and phenotypes in all cervical carcinomas tested so far – both in HPV-DNA-positive and negative carcinomas.
Furthermore, they discovered the individual karyotypes of each carcinoma correspond 1 to 1 to their individual phenotypes (e.g. invasiveness and resistance to chemotherapeutic drugs). This is proof-of-principle that these karyotypes determine the phenotypes of cancers – rather than the defective and latent Papilloma-virus DNAs.

According to the karyotypic speciation theory, the defective viral DNAs of “HPV DNA-positive” carcinomas are functionally irrelevant, because they are not expressing any viral proteins. Instead they are non-immunogenic fossils of long past Papilloma-virus infections. As such they are no matches for the thousands of cellular genes that are abnormally expressed in cervical carcinomas.

Why would only 1 in 10,000 HPV-infected women develop cervical cancer?
According to the karyotypic carcinoma theory this discrepancy is the result of the facts that HPV infection and carcinogenesis are two entirely independent events:
– No specific correlation exists between HPV and cervical carcinoma. HPV is very common, about 70 to 80% endemic in the American population. The rest of the US population is HPV-free. The virus is typically sexually transmitted at young age. Since cervical carcinomas occur in both HPV-positive and HPV-negative females, there is no specific correlative evidence that HPV plays any role in causing cervical cancer.
– There is also no specific functional correlation between HPV-infection and carcinogenesis. As shown from the clonal karyotypes of cervical cancers, cancers originate from a major rearrangement of the karyotypes of normal cells. Since this is true for cervical carcinomas of HPV-positive and of HPV-negative females – and is indeed true for all cancers – there is no functional evidence that HPV plays a role in the development of carcinomas. This conclusion is consistent with the fact that carcinomas with new clonal karyotypes arise only 20 to 50 years (!) after infection by HPV, which we discuss next.
Thus there is neither a specific correlation between the presence and/or the functions; or lack of functions of HPV and carcinogenesis.

Why would cervical cancers only develop 20 to 50 years after HPV infection? 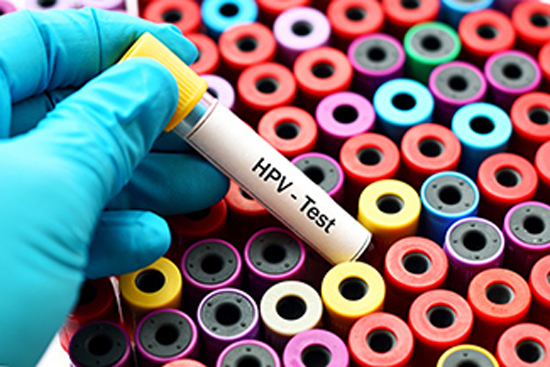 The karyotypic cancer theory sheds light on the presumed long latent periods from HPV infection to cancer. This huge latent period suggests evidence of two entirely unrelated events:
– Infection with a sexually transmitted, benign Human Papillomavirus at young age, and
– A cervical cancer diagnosis – 90% of which occur over the age of 50.

The presumed long latent period could be a result of the low probability of forming a new autonomous cancer species from a normal somatic cell by random karyotypic rearrangements. The evolution of a new individual species of cells (cervical cancer cells) with the ability to reproduce independent of influence from surrounding human cells by random karyotypic variations of precursor cells takes time.

The very low probability of evolving a new autonomous cancer species by random karyotypic evolution explains not only the long and unpredictable time intervals between HPV infection (if it occurs) and cervical carcinomas, but also the classical age bias of all cancers. The age bias of cancer says that over 90% of all cancers only occur at ages over 50 years.

The authors concluded the chronological discrepancies between HPV infection and carcinogenesis exclude a direct mechanism of action connecting viral infection and the development of cancer. Instead the time-dependent evolution of a new cancer-specific karyotype supports the karyotypic theory of the origin of cervical carcinomas.

Why do cervical carcinomas have individual karyotypes and phenotypes – rather than common phenotypes as predicted by the virus hyothesis?
The probability of forming the karyotype of a new autonomous cancer-species by random karyotype variations is very low and thus unlikely to ever generate the same new species twice – much again as in conventional speciation. Thus all cancers caused by karyotypic speciation will have individual, if sometimes similar phenotypes.

Why are presumably viral cervical carcinomas not immunogenic and thus not eliminated by natural antibodies?

The karyotypic speciation theory explains why presumably viral cervical carcinomas are not immunogenic and are thus able to grow in HPV-DNA-positive people, which contain anti-HPV antibodies produced as a result of prior infection(s) by the virus.
According to the karyotypic cancer theory, carcinomas are generated de novo from cellular chromosomes, genes and proteins, which are not immunogenic in the host of origin (just like all other cancers). By contrast, hypothetical cancer cells generated by viral proteins would be immediately eliminated by antiviral immunity.

Since cervical carcinomas have clonal carcinoma-specific karyotypes, we know they were generated via chromosomal rearrangements of thousands of normal cellular genes, which are not immunogenic.
According to the authors, fragments of inert HPV DNA found in 70 to 80% of cervical cancers (and in 70 to 80% of all women in the US!) are left-overs of by-gone infections or warts that occurred 20-50 years prior to carcinogenesis. Infections and resultant symptoms were eliminated by natural anti-HPV antibodies.
Should the Karyotypic Speciation Theory be proven correct, HPV vaccines could not possibly reduce the incidence of cervical cancer – or any other type of cancer for that matter.

What do we do now?

Until such time as scientists can verify or disprove the Karyotypic Speciation Theory of cervical cancer development, medical consumers must proceed with caution.
This is a scientific debate which cannot be ignored. Public health authorities and medical professionals must apply the precautionary principal by suspending the use of HPV vaccines and supporting the already proven, safe and effective method of controlling cervical cancer – Papanicolaou screening.

It is this method which, after its introduction by George Papanicolaou et al. in Science in 1952, reduced the incidence of cervical cancer in the US from the most common of the 10 most common cancers of women to one that no longer belongs to this list.
Moreover, this proven test for cervical carcinomas, colloquially termed “Pap screen” after Papanicolaou, costs only a small fraction of the $300-500 for the Gardasil and Cervarix vaccines and has no serious adverse effects.

Immediate independent studies must be conducted to discover which of the theories discussed above is accurate. If HPV does not cause cancer – HPV vaccines are useless.
If HPV vaccines are useless, it is certainly not worth submitting yourself (or your loved ones) to the 2.3 to 2.5% risk of serious adverse reactions and the 2.4 to 3.3% risk of developing a new medical condition potentially indicative of autoimmune disorders experienced by Merck’s Gardasil 9 clinical trial participants.

The Anunnaki and Planet X: The Nibiru Cataclysm