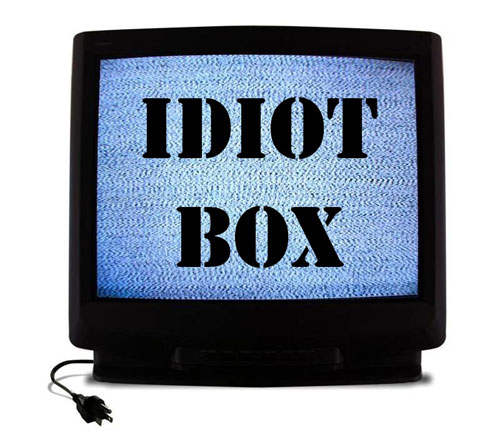 At the heart of the social insanity, mindless acquiescence to authority and automatic compliance with any and every new government rule or regulation, is a deliberate effort to dumb down the population. It takes place in the halls of our educational institutions, and it comes home with us at night to our television screens.

According to educational whistleblower and author of The Deliberate Dumbing Down of America, Charlotte Iserbyt: “over a thirty- to fifty-year period, what must surely amount to tons of materials containing irrefutable proof, in the education change agents’ own words, have the deliberate, malicious intent to achieve behavioral changes in students/parents/society, which have nothing to do with commonly understood educational objectives”.

We know the education system is designed to produce drones, but today we bring your attention to the role television commercials play in engineering our society toward entropy, division, conformity and decay.

Consider a ridiculous advertisement from Australia, where a wine company is hoping you’ll drink more of their booze after watching a computer generated kangaroo liven up the party while getting the attention of supermodels. They overtly twist their brand name, Yellowtail, into crude sexual innuendo, appealing to your most base desires.

Young children learn primarily by observation of what other people do. If adults do stupid things, kids do stupid things. So it is as well with the so-called mature adults among us, who imitate each other in order to fit with each other.
When the templates for acceptable social behavior are pounded into our heads from television, humans emulate the celebrities, actors and beauties on the screen. And commercials are the worst, as their rapid attention deficit generating format are repeated again and again so as to become implanted in our minds.

Couple this with the fact that we are technologically isolated (while highly connected) in today’s society, and as such, mass media serves as a kind of common language, a way of relating to one another, and of establishing the broadcast-level reality. Now you have a world of people who take cues from advertisers, which are adopted by others, eventually snowballing into a real-life Idiocracy.

Another commercial, Devour frozen foods has altogether given up on subtlety, turning the experience of eating processed foods laden with preservatives, colorants and other chemicals, into an orgasm.
And in this creepy version, again for Devour processed foods, a drone-like office employee is so dumb, and so sexually confused, that he talks dirty to his plastic dish of synthetic garbage.

The corporate-controlled consumer matrix, which now guides the development of our cities and social lives, became a cultural imperative with the help of the scientific development of product marketing. Also known as corporate propaganda, it was pioneered mid-twentieth century by author of the book Propaganda, Edward Bernays, who himself best explains the engineered scheme at play in pop-culture: “The conscious and intelligent manipulation of the organized habits and opinions of the masses is an important element in democratic society. Those who manipulate this unseen mechanism of society constitute an invisible government which is the true ruling power of our country. We are governed, our minds are molded, our tastes formed, our ideas suggested, largely by men we have never heard of… in almost every act of our daily lives, whether in the sphere of politics or business, in our social conduct or our ethical thinking we are dominated by the relatively small number of persons… who understand the mental processes and social patterns of the masses. It is they who pull the wires that control the public mind”.

He would know. His ideas were heavily influenced by the work of his uncle, Sigmund Freud, the so-called father of modern psychology, who developed theories which still govern much our understanding of the human psyche. He’s most recognized for the idea that humans are motivated first and foremost by the drive to fornicate. Bernays’ contribution was linking products to sex, with marketing that jars the perception of reality.

In this classic piece of commercial, Axe Body Spray does a top version of the time-honored marketing illusion that the purchase of a product will bring sex with beautiful women.

A major purpose of this type of marketing is to suspend disbelief, which is a visual procedure which leads to the acceptance of outlandish claims. Commercials are the perfect open format for messing with people’s heads, where superstar, perfect people present conflicting, senseless ideas.

Fifty plus years of ridiculous advertising instructing our culture is bearing its intended fruit: a society of entitled, impatient, crass, unreasonable, and shallow people has emerged. In this climate, unity is impossible and the masses are more impressionable than ever, thus, the controllers are free to have their way with us.

In this commercial these two clowns in a Sonic fast food restaurant rattle on in a pointless stream-of-consciousness conversation which links chicken wings (the food) with hooking up with women, which have nothing at all to do with each other in real life.

It’s called “television programming” for a reason, and it is paid for by advertisers whom tinker with society by bombarding us with absurdity and stupidity.
It could be entertainment.
And it could also be another mechanism of social control, urging your subconscious mind to buy stuff you don’t need, to consume products and chemicals that are harmful to you, to behave immaturely and irrationally, to over-sexualize everything, to hold false expectations, and to participate in a manufactured reality that ensures self-destruction.
You decide.

Uncovering Why Playing a Musical Instrument Can Protect Brain Health