Elites’ Globalization in Danger, What’s Next? 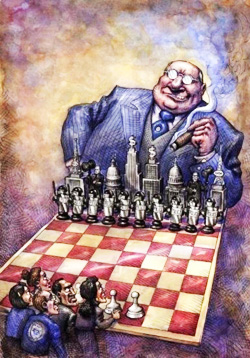 They’re finally getting the message! We, who pay the freight, are getting fed up with the way they handle things, so now they are running scared. Isn’t it about time, and shouldn’t we keep the heat on longer and even higher? Why ask that question?

Well, Bloomberg News tackled a similar subject with the publication of With Globalization in Danger, G-20 Double Down on a Defense. Reading that rather perceptive article, one also has to read in between the lines. What’s being delineated is that the world’s movers and shakers run scared when the “mice stand up and roar”. And why shouldn’t they shake in their shoes when, basically, they have ruined many of the economies in the world!

There hardly are decent-paying jobs in the USA!
Most manufacturing jobs have moved off shore! China’s going to make much of the U.S. pharmaceuticals, including vaccines. Job cutbacks plague every industry, and now they are hitting the tech industries, too! Goody, goody! Why such an exclamation? Because corporate greed and technology are responsible for putting most folks out of work, when one objectively examines the dynamics that accompany bottom lines on financial statements of corporations run by the “money changers”. Robots will replace workers who need to feed families!

Probably nothing shook their shoes like the heroic people of Great Britain voting to save their culture and country. “Brexit was a big hit!” They didn’t see it coming? How could they have not seen it, when financial discord and strife are all over the European Union? The English Channel keeps Britain a little “safer” from all the social unrest forced upon the rest of the EU due to the manufactured Syrian and refugee crises by the warmongers who also influence, if not run, the money markets.

Next should be Frexit (France exit). A few more countries in the EU – like Greece, a country forcefully placed into almost perpetual financial servitude – should bite the bullet like little Iceland did and say “yassas or antio sas” goodbye in Greek, and forget any air kisses.

Probably nothing scares them like The Donald!
Trump is too much not like them, and that has them running really scared. Nothing exemplifies how scared than how the Democratic National Convention in Philadelphia was “covertly” run by those pulling strings from behind political curtains. Paying $50 to fill empty seats for warm bodies to yell and clap for Hillary is not a way to show party unity or jack up a candidate’s popularity.

The media, which they control lock, stock and barrel, performed a deliberate public relations campaign for Hillary – and a public disservice – by almost totally disregarding the political unrest and upheaval within the convention regarding the “Bernie people”, another genre of “mice” who have them concerned. However, Bernie’s apparent caving in to the Democratic National Committee’s obvious arm twisting indicates just how things are done when they want them done their way. 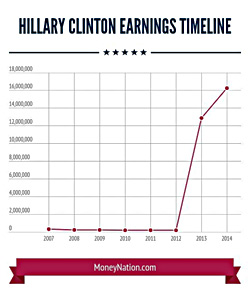 But here’s the real nitty gritty when it comes to the elites who think they run the world. Oh, they do run the world! Let’s examine how they obviously take care of one of their own, Hillary Clinton.

In prior years, 2007 through 2012, Hillary Clinton’s salary ranged from $165,200 to $186,600. However, in only TWO years – 2012 to 2014 – Hillary’s earnings jumped to slightly over $16 MILLION. Don’t you wish you could get that kind of work too? The chart above ought to say more than anything about Hillary’s aspirations to be – she IS – one of them, cater to their one world order globalization whims, start World War III, and institute a globalized society apparently creating a global gulag the likes of which this planet or history have never known. What are UN troops doing in the USA now? Here’s something readers ought to note: When an alternative news reporter wanted to copy and paste a URL for a UN campsite a hiker found in Middle America, he got the prompt “Site blocked”! What does that tell?

Is that what the 99 percent want?
Remember, money talks “loud and clear”, and when it’s their money, it can even work horrible wonders! Look what it’s gotten us since 2008 (financial crisis, destructive wars, totalitarian legislation etc.).

Hillary, too, obviously is running scared and really upset about how the public perceives her. And why not, when she always tries to hide behind her Teflon veneer by saying things like “I relied on and had every reason to rely on the judgments of the professionals with whom I worked.”
“So in retrospect, maybe some people are saying, ‘Well, those – among those 300 people – they made the wrong call’. At the time, there was no reason, in my view, to doubt the professionalism and the determination by the people who work every single day on behalf of our country.”

Whom will Hillary blame when she decides to nuke some country her handlers want nuked? We have to think about that, don’t we? Or, will everyone’s angst be soothed by “Slick Willie’s” negotiations? Remember something like what can be referred to as “the Loretta Lynch format”.

The Clintons have a checkered past that really needs deeper examining and answers, since the money folks backing Hillary’s presidency quest needed her in the Oval Office as the last piece on the game board to accomplish their Agenda 21 updated to Agenda 30. It all looks and sounds “write”, and that’s the correct form of right that we should use. Just because it’s written doesn’t mean it will happen humanely or that there are no codicils we aren’t permitted to read on the Internet.

The Americans didn’t do their due diligence vetting candidates going into the 2008 elections and look what they got!

Can we really trust them forcing their economics and presidential candidates upon us?

Meanwhile, the globalists’ have their own headaches, as, to their desperation, Trump won the elections and he seems to be keep his anti-globalist promises he made during his campaign.