Read the second part of the article here

Despite their name, coconuts aren’t nuts. They’re actually the fruit (scientifically termed drupes) that drops from the lovely palm fronds atop the beautiful coconut palms inhabiting tropical areas of the world.

Named by sixteenth-century Spanish settlers, coconut derives from the Spanish word coco, used to refer to the skull. They coined the term because they thought the three indentations on the coconut’s fibrous outer coating resembled a skull’s two eyes and nose.

Originating in the tropical landscapes of Florida and the numerous tropical islands around the world, coconut palms provide us with a plentiful crop—55 million tons per year. 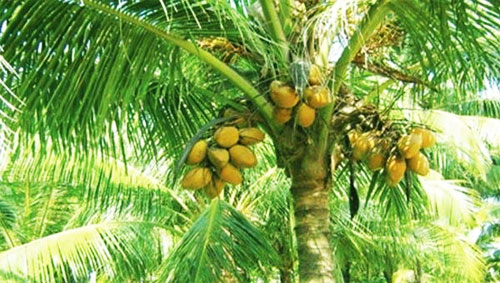 Coconuts actually account for up to 60 percent of some Pacific cultures’ diets. In economic trade, medicinal treatments, and nutrition, the coconut has established itself as one of the most important natural resources known to humankind.

The History and Uses of Coconut Oil Coconut fossils dating back 55 million years have been discovered in parts of Australia and India, yet earlier fossils found in parts of the Americas lead some researchers to theorize that South America and southern North America may have been the coconut palm’s birthplace. The coconut’s ability to germinate even after the fruit has traveled the earth’s oceans for 100 days or over 3,000 miles has made it difficult to determine where the coconut originated. Regardless of the coconut’s birthplace, its importance in myriad cultures throughout time is evident in multiple written works dating back 1,500 years.

Although Pacific cultures had utilized coconut oil’s medicinal powers for centuries, the Americas only learned of its healing properties in the mid-eighteenth century. Coconut oil’s use for skin and hair and its ability to combat bacteria, fungi, viruses, parasites, and microbes quickly made it a commodity of high demand in the Americas. In only a few decades after its introduction in the early 1900s, the oil’s popularity skyrocketed. Finding the best method for extracting and processing the oil quickly became a focus for manufacturers worldwide.

Two methods were identified for developing coconut oil: “dry” and “wet.” The dry process involved drying the “meat” of the coconut using heat, sunlight, or chemical solvents, followed by pressing the oil directly from the meat. The wet process compressed the coconut meat to expel the liquid and then separated the oil from the water via fermentation, boiling, or various chemical processes. Because the wet process required the use of heavy machinery, was more expensive, and often resulted in a lower yield, the dry process became the more common procedure used to produce coconut oil. Once the chemical solvents in the manufacturing process were replaced with natural treatment alternatives that were not exorbitantly expensive, the dry process became even more appealing to manufacturers. To this day it remains the go-to process for extracting and developing extra virgin coconut oil.

Because of its high saturated-fat content, coconut oil was once thought to be unhealthy. However, researchers studying its unique properties stumbled upon an important difference between coconut oil and other high-saturated-fat foods. They discovered that coconut oil benefits health because it contains a unique type of saturated fat, classified as lauric acid, to which the body responds differently than it does to any other saturated fat.

Lauric acid is found in other natural sources, such as breast milk. This twelve-carbon fatty acid is enzymatically digested, shuttled straight to the liver, and metabolized into a monoglyceride called monolaurin. During the digestive process, coconut oil’s beneficial lauric acid increases energy levels and stamina, and boosts “good” cholesterol (HDL) levels. In addition, lauric acid and monolaurin act as antibacterial, antifungal, antiviral, and antimicrobial agents that potentially safeguard against common illnesses and ailments of the viral, bacterial, fungal, and microbial sort.

Fatty acid chains of different lengths affect the body differently. Fats are classified in two ways:
1. By the type of saturation
2. By the length or size of the fatty-acid chain

Okay, you may be dubious about all these supposedly great coconut oil uses and benefits. We’ve been taught to be skeptical of anything that sounds too good to be true—and for good reason. When medications promise to deliver outstanding results but also create sneaky side effects, when foods promise to be fat-free but are packed full of lots of unhealthy ingredients and calories, or when a new product assures us it can help us lose weight overnight with no effort at all, we know to be wary of the claims and skeptical about the results. 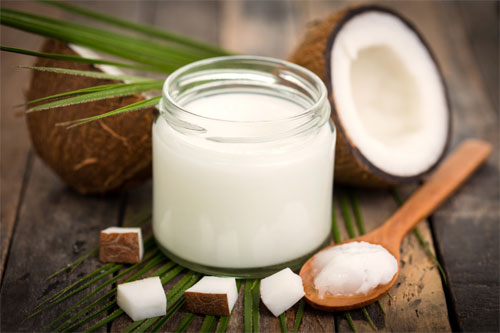 Coconut oil, however, is one of the few products where consumer skepticism is not warranted. Scientific research and peer-reviewed studies present evidence to demonstrate the amazing powers of coconut oil in improving virtually every area of your health… and your quality of life.

And that’s just the tip of the iceberg!

The main components responsible for providing all these different, effective benefits of coconut oil are medium-chain triglycerides (or “medium-chain fatty acids”), lauric acid, and capric acid. These multipurpose agents fight to prevent illness, improve immunity, and safeguard the health of your body externally and internally. Coconut oil’s effectiveness is not just a gimmick or a fad.

One product and one simple lifestyle change can dramatically improve your overall well-being, providing benefits to your blood, metabolism functioning, digestion and nutrient absorption, and so much more. All you have to do is consume 1 to 3 tablespoons of coconut oil in its liquid or solid state daily to enhance your overall health and safeguard it for years to come.

You can store your coconut oil in your refrigerator or cabinet. When kept at a temperature higher than 75°F, coconut oil becomes liquid; at lower temperatures it solidifies. Either way, it provides the same benefits. The virgin, organic variety of coconut oil has a shelf life of fifteen months to three years, but you’ll use up your trusty container of coconut oil well before that length of time once you discover how many ways you can use it in your everyday life.

Nutritional deficiencies cause illnesses and diseases that wreak havoc on the world’s population—and not only in poor nations. With proper nutrition, the body is able to function properly and fend off illnesses; therefore, a quality diet is a lifesaver, literally. Each bite of food you consume contains nutrients that serve as the building blocks your body needs to perform everyday functions: provide energy; digest food; and maintain the health of your brain, heart, organs, and bones.

One benefit of coconut oil is that it increases the body’s absorption of necessary vitamins and minerals—by as much as eighteen times—when you add it to foods or consume it prior to eating. Put a single tablespoon into your food, or take 1 tablespoon 1 to 3 times per day to ensure that your body can absorb and utilize the nutrients you need. As New York Times bestselling author Dr. Joseph Mercola explained in his article about coconut oil “Which Oil Will Help You Absorb Nutrients Better?”, “not all oils are created equal when it comes to nutrient absorption… Some work better than others and can actually enhance the amount of nutrients your body receives from the food you eat.”

When your body is deficient in vitamins or minerals, it is forced to limit the processes in which those elements are used—it may even extract those essentials from the existing stores found in the blood, organs, and bones. Deficiencies make the body more susceptible to illnesses and diseases that it could fight off if it were healthy. By using coconut oil in your daily diet, you’ll improve the overall quality of your health and safeguard against possible illness.

The Perilous Path Towards Awakening (5)