A Secret Babylonian Cult – The Jesuits

Independent scientist Leuren Moret, MA, PhD (ABD) discusses the historical role of Russia in protecting humanity against the destructive scenarios of Jesuitism, including the role of Tsar Alexander II in saving the USA during the Civil War to the present day of Vladimir Putin in preventing WWIII.

In Part I of a Special 3-Part program, independent scientist Leuren Moret, MA, PhD ABD, confirms that U.S. Government and Jesuit controlled HAARP under President Barack Obama in coordination with monarchies and City of London banking networks are creating polar vortex and nuclear typhoons filled with Fukushima radiation that is then dropped on the northern hemisphere populations, especially targeting the United States people.

By contrast, Vladimir Putin, President of the Russian Federation, is employing Russian HAARP to lay an electromagnetic fence around Russia to keep out plumes filled with Fukushima radiation, thereby protecting the Russian people from depopulation. Putin is also constructing BRICS, a banking model in competition with the Rothschild-dominated private debt-based fiat-currency, a prison for humanity.

Radiation levels are genocidal and unreported in US

In Part I, Leuren Moret reports radiation readings on the continental United States following these HAARP generated polar vortex and nuclear typhoons that was two to three times the levels requiring Hazmat clothing and immediate evacuation. These showed a range of 11 to 15 BQs/sec (becquerels per second) at ground level in many parts of the U.S. The standard requiring Hazmat clothing and immediate evacuation is well below that at 5 BQs/sec. Readings in the continental U.S. as high as 600-1000 BQ/sec. have been obtained following a Fukushima radiation-bearing HAARP “bombing” by polar vortex and nuclear typhoons radiation plumes.

Asked why,
– public health authorities
– members of the public with Geiger counters are not reporting these levels,
…Ms. Moret replied that,
1. There is an extensive cover-up designed to prevent the North American and world public from knowing true radiation levels
2. Radiation cover-up: There are sophisticated stealth algorithms used in creating HAARP polar vortexes and nuclear plumes, steering them to Fukushima to fill with radiation, and then steering these plumes around the world to bombard the world with targeted radiation as part of the depopulation program.
3. Electronic cover-up: There is a worldwide electronic cover-up to desensitize civilian Geiger counters programs to actual radiations levels

After loading up on Fukushima radiation earlier in the week, two nuclear vortices moved into the north Pacific and headed for the Arctic region. The one on the right (below Alaska) moved down the west coast of the US, contaminating the food baskets of Canada and the US. The second nuclear vortex formed the Polar Vortex that moved down the middle of Canada and the US, then turned east to contaminate the entire US east of the Rocky Mountains. It was obvious that certain global regions were protected from radiation exposure by HAARP heating, creating high pressure zones over Russia, Korea, China and Central and South America.

This wind storm image (image below) confirmed that Fukushima radiation from Japan, and the tsunami debris field stretching across the Pacific, served as radiation sources for nuclear typhoons and storms thrown at North America.

Accelerated genocide is the desired endpoint. 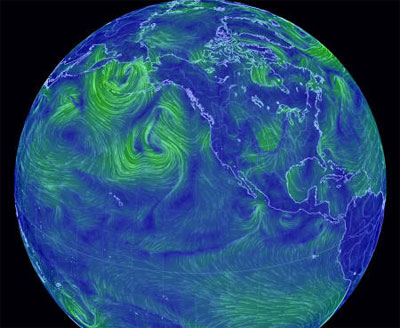 Radiation Alert – Flying is hazardous to your health

Leuren Moret reported on massive increases in the upper atmospheric radiation column from levels 20 years ago. For example, radiation levels of 8 BQs/sec were reported in a commercial airline cabin in a flight across the continental United States, compared to 5 BQs requiring immediate evacuation of that airliner. Airline crews, notably pilots, who are continually exposed to these lethal levels of radiation, are reporting high levels of radiation illness, including premature death, heart disease, cancer and other illnesses.

Moreover, the “Wigner effect” in which radiation weakens metal joints, bolts and key airliner parts, has accelerated to the point where one of the two major Japanese airlines shut down in the summer of 2014 because of lack of airplane maintenance and lack of pilots. One U.S. entrepreneur reportedly abandoned plans to revive Eastern Airlines once he was briefed on the atmospheric radiation effects on crew mortality and on equipment, let alone passengers. “The airline industry is dead,” he was heard to say.

In Part II of her interview, Leuren Moret summarized key methodologies of the depopulation plan that the Matrix elites have undertaken. The equation determining the Depopulation rate is:
Depopulation = Accelerate Death Rate + Decelerate Birth Rate.

In her Part III interview, Leuren Moret details how the genocides that Russia has experienced over the last Century, including,
– The Bolsheviks during the Revolution
– Holodomor – in the Ukraine and Russia during the Stalin era
– Chernobyl nuclear False Flag (by CIA), where Russian life span was decreased by 10 years, led to engineered collapse of the Soviet Union.

Leuren Moret details the following aspects of Putin’s Plan:
1. Abolish GMOs in Russia
2. Radiation – Create HAARP Fences around Russia to keep USA/Obama/Jesuit radiation plumes out – NOTE that Russia is exporting nuclear power plants to China and India, thereby increasing depopulation by radiation in China and India
3. NGOs – Clean out NGOs from Russia and force them to register as foreign agents
4. Deconstruct the “Hidden War” template that Farnese, Zionists alien infiltrators have used to bring down societies for the last 3000 years. Most recent example is USA infiltrated by Zionist/NWO aliens.
5. Create BRICS as alternative to Rothschild controlled Federal Reserve system of Petro dollars – Asked about Putin’s bringing in to BRICS funding of Vatican funds through Jesuit Pope Francis Bergoglio, Ms. Moret stated this was a “martial arts” move on Putin’s part.
6. Deconstruct the Transhumanist Agenda to robotize humans.