[Editor’s note: The article below is taken from the spiritualresearchfoundation.org website. It contains some interesting information, which is in line with traditional teachings, and that is why we have chosen to present it to you. However, it also contains some ideas that belong to the authors and to which we do not subscribe. Please use your discernment, logical thinking and spiritual intuition when evaluating this information.]

Starting from the year 1999, the battle between good versus evil has been intensifying in the subtle-regions. Deities and Saints have been fighting this battle against very powerful forces of evil such as subtle-sorcerers in the subtle-world. This fighting by the forces of good is totally in the subtle realm and takes place at the ‘level of existent power’. The level of existent power can be understood by the analogy of the Sun. Every day when the Sun rises, the flowers bloom. The Sun does not ask or make the flowers bloom. It occurs automatically by the very presence of the Sun. Similarly, by Their very existence the Saints and Deities, through their Divine consciousness (chaitanya) that is transmitted continuously, fight the battle. 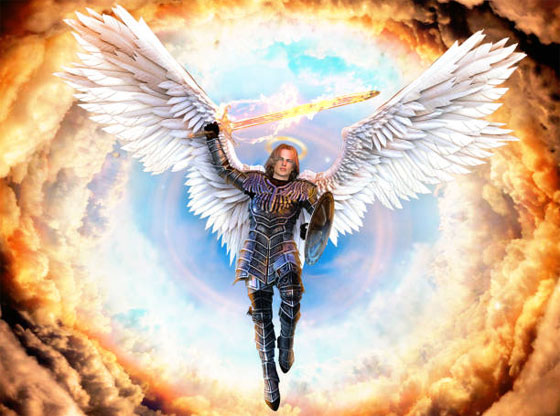 Seekers of God doing spiritual practice for the sake of society participate in this battle with their little might. When they spread the awareness of Spirituality within society (as part of their spiritual practice) they are attacked by malefic energies from the subtle dimension. Seekers of God are able to withstand these attacks by the use of spiritual healing methods as well as through spiritual power gained through spiritual practice and blessings and most importantly the grace of God. The forces of evil in the subtle-world also possess and give energy to the anti-social elements on the Earth realm as shown in the diagram below. The result of which is when we switch on the news on television, we see a world that is increasingly chaotic with lack of morality, insane behaviour, rampant terrorism and skirmishes and wars.

Since most people do not understand the spiritual cause or perspective behind the chaotic present times, they pursue to rectify the situation through physical means such as waging a war against terrorism or psychologically by having conventions, summits etc. However, this is not the solution as all the anti-social elements are powered by (i.e., are puppets of) the subtle evil forces. As a result, it is not possible to eradicate or overcome them by physical or psychological means. Even if the worst of the anti-social elements on Earth were to be eliminated, higher level malefic energies would simply possess yet another anti-social element giving them their malefic power. This malefic subtle power is far more powerful than any physical power.

The state that the world is in today can only be rectified if the evil in the subtle-world is overcome. This is the reason why Deities and Saints (and seekers to a lesser extent) have been engaged in a subtle-battle, fighting superior subtle-sorcerers from the deepest regions of Hell (Pātāl), with Their spiritual strength in the years 1999 to 2023. 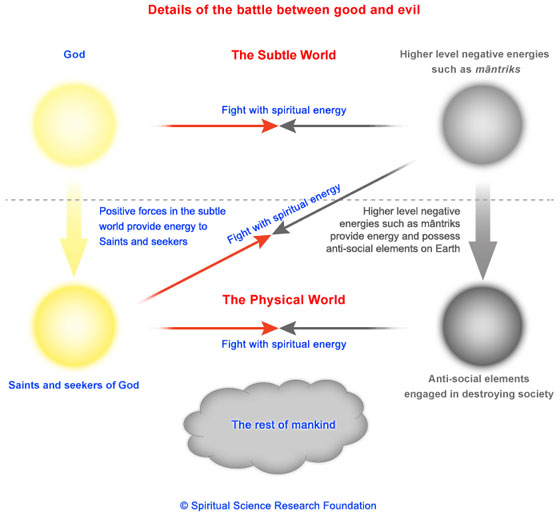 The subtle-battle has a peak and it will slowly begin to subside in the subsequent years as the subtle-forces of good overwhelm the subtle-forces of evil. The anti-social elements that were initially getting their energy from subtle-sorcerers in the subtle realm will no longer have access to that energy. As a result, the anti-social elements on Earth and the rest of mankind that is being possessed and affected will reduce. Due to this they will be overcome. This will be followed by a physical eradication of all people that are evil and anti-social elements from the face of the Earth. In the major physical purification that will ensue in the coming years, will increase the occurrence of natural disasters, the world population will decrease. People with a lower spiritual level i.e. below 30% are more likely to be adversely affected in this transformation. Those who are evil will be wiped out as they will be fighting on the side of the evil. Those who are sitting on the fence, i.e. neither on the evil nor on the good side will suffer in the ‘crossfire’. 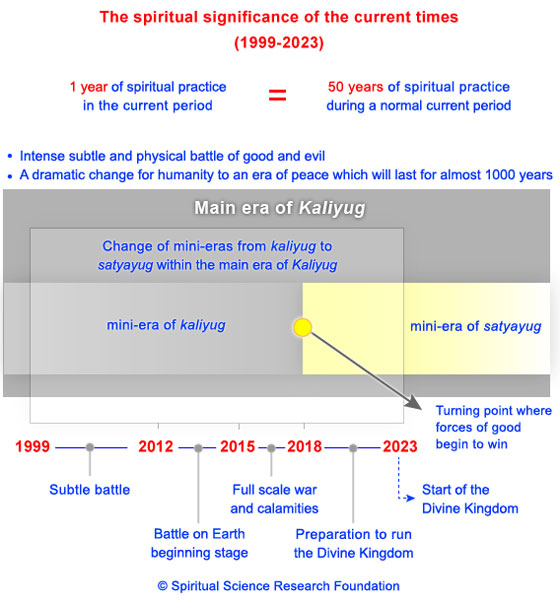 At all times after the universe came into existence, a particular subtle basic component has been predominant. For example in Satyayuga, the Sattva component was predominant and now in Kaliyuga it is the Rajas–Tamas component that is predominant.

The period between the years 1999 – 2023 represents a twilight period between two eras as we move from a darker age (mini-Kaliyuga) to a spiritually better one (mini-Satyayuga) within the main era of Kaliyuga. During this twilight period of 25 years, any spiritual practice undertaken by one according to the basic principles of Spirituality will benefit one immensely. This is because God graces seekers with spiritual progress when done even in adverse times.

After the battle of good versus evil when the subtle demonic forces have been conclusively subjugated, they will stop fighting and go away to undertake rigorous occult practice to regain occult strength so that they can once again try to stake their claim of supremacy on the planet. Also as a result of the demonic forces being overcome, a period of Sattva predominance will follow on the Earth region. The mini-Satyayuga known as the Divine Kingdom will begin. This era is ushered in at all the subtle-regions above Earth first and then comes on Earth as well.

We are in the midst of a watershed in the history of humankind. After the physical purification, there will be a period of trial and error as the world adjusts to the new world situation and picks up the pieces. During this time, the potential to run the Divine Kingdom will be generated in the people that survive. After this period of flux, humanity will experience almost a thousand years of peace. In the new era, there will be renewed spiritual awakening and flourishing of disciplines such as the science of Āyurvēda, hitherto unaccepted as a mainstream science by the modern world.

Among all the realms of existence in the universe, the Earth region is most conducive to do spiritual practice. Unfortunately, when the period of peace and prosperity ensues, over time mankind gets lost in worldly pleasures and forgets about spiritual practice. As a result of this the sattvika starts declining. Consequently, there is a progressive rise in unrighteousness that further decreases the sattvika and increases the Rajas–Tamas. This decline in Sattva and increase in Rajas–Tamas affects all the regions. Though it affects the subtle-regions only fractionally, even that marginal decline in Sattva component causes severe distress to the good subtle-bodies in the regions above the Nether Region who are used to uniform high Sattva levels at all times.

For seekers of God who want to grow spiritually, these 25 years represent an unparalleled opportunity for spiritual growth. Every effort made to realise God in these years will have a multiplied effect.

The evil-doers and anti-social elements on Earth become puppets in the hands of the subtle malefic energies. That is why to reduce the strength of malefic energies; all seekers need to increase spiritual practice and devotion to God. Assisting in the spread Spirituality along with making efforts to reduce ones ego and personality defects results in rapid spiritual growth.

How the Government May Accuse You of Domestic Terrorism