How the Government May Accuse You of Domestic Terrorism 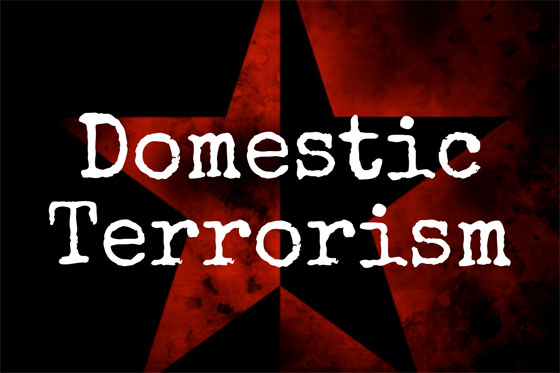 In June 2021, the U.S. National Security Council released a new “National Strategy for Countering Domestic Terrorism.”[1] While it’s being largely framed as a tool to fight White supremacy and political extremism, the definition of what constitutes a “domestic terrorist” is incredibly vague and based on ideologies.

In a podcast with one top independent journalists, Whitney Webb,[2] Media Roots Radio host Robbie Martin notes how this creates a dangerous slippery slope, one that’s connected to the attempts to have increased surveillance and tracking of Americans’ data after 9/11.[3]

The “War on Terror,” launched in the aftermath of the September 11 attacks, Martin says, “was merely a prelude to a larger domestic crackdown on political dissidents.”[4] Webb agreed, stating that we’re “near the bottom part of the slippery slope” already, and it’s not a stretch that one day anyone who disagrees with the government could be labeled a domestic terrorist and charged with a crime.

The whole justification for the War on Terror was to target “precrime”, or terror acts before they happen. Initially, the legislation was meant to target foreign governments and individuals, but bills are pending that would make the legislation applicable to Americans in the U.S.[5]

Investigative journalist Glenn Greenwald stated that the end goal of the newly emerging war on domestic terrorism is to “essentially criminalize any oppositional ideology to the ruling class,” adding, “There is literally nothing that could be more dangerous, and it’s not fear-mongering or alarmism to say it.”[6]

This isn’t a partisan issue, but something that’s been in the works for decades. Greenwald stated that viewing Washington as Democrat versus Republican, with one side being “your team” and the other being “your enemy” is a flawed belief, as an elite ruling class is truly in power:[7]

“There is a ruling class elite that is extremely comfortable with the establishment wings of both parties … who they fund equally because those are the people who serve their agenda. Then there’s a whole other group of people at whose expense they rule in. Some consider them on the left, some on the right,” but “it’s time to break down those barriers.”

It’s important to understand that the U.S. already has aggressive criminal laws in place, such that more people are imprisoned in the U.S. than anywhere else in the world.[8] Do we need further laws to criminalize people put in place? A concerning pivot has occurred as well, shifting in focus to the FBI targeting this new model of terrorism while the terms like “incitement to violence” have been radically expanded in meaning. 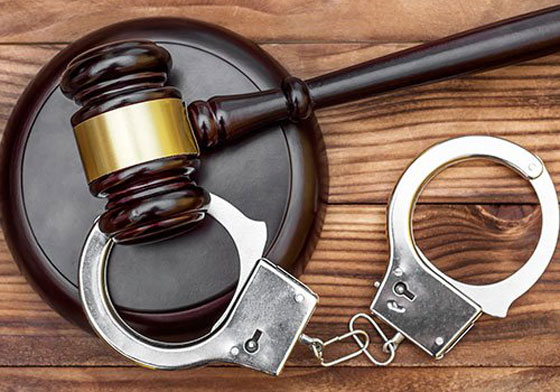 “It is accompanied by viral-on-social-media pleas that one work with the FBI to turn in one’s fellow citizens (‘See Something, Say Something!’) and demands for a new system of domestic surveillance,” Greenwald wrote.[9]

You don’t have to be violent to be declared a terrorist. You may simply have what the government deems to be “extremist views” or could be accused of spreading disinformation — although there’s no clear definition of what “disinformation” is. According to Webb:[10]

“There is talk in the domestic terror strategy that people who spread disinformation can also be classified as extremists and a threat to national security and, of course, we’ve seen over the past several years, how this disinformation label can be applied to independent media as a way to promote censorship of voices that are critical of U.S. empire, among other things, or that just don’t fit a particular government narrative.”

As taken directly from the National Strategy for Countering Domestic Terrorism:[11]

“Domestic terrorists have — particularly in recent years — often been lone actors or small groups of informally aligned individuals who mobilize to violence with little or no clear organizational structure or direction. These individuals often consume material deliberately disseminated to recruit individuals to causes that attempt to provide a sense of belonging and fulfillment, however false that sense might be.

Their ideologies can be fluid, evolving, and overlapping. And they can, in some instances, connect and intersect with conspiracy theories and other forms of disinformation and misinformation …

These elements combine to form a complex and shifting domestic terrorism threat landscape and create significant challenges for law enforcement. Especially on Internet-based communications platforms such as social media, file-upload sites, and end-to-end encrypted platforms, all of these elements can combine and amplify threats to public safety.

… These efforts speak to a broader priority: enhancing faith in government and addressing the extreme polarization, fueled by a crisis of disinformation and misinformation often channeled through social media platforms, which can tear Americans apart and lead some to violence.”

Fusion Centers Are Ready and Waiting

Webb is concerned about fusion centers, at which the Department of Homeland Security, FBI, NGOs and others in the private sector collaborate to decide who’s a terrorist and who’s not.

Fusion centers have been around for a while, but as the war on domestic terror progresses, Webb believes that fusion centers will take on the same role as the CIA-run Phoenix Program during the Vietnam War, which was designed to collate names of dissidents and people with extremist sympathies to databases so they could be pursued by the relevant authorities — many ended up being kidnapped, tortured and killed.

Fusion centers are waiting to take on a more active role in the newly declared war on domestic terrorism, but in order for them to gain widespread acceptance, Webb believes that an outrageous event needs to take place — one that goes further than the January 6, 2021, storming of the U.S. Capitol, such as something that targets civilians and sparks outrage among the U.S. public that something must be done.

“This is why I worry that some other event may take place in order to push this strategy further. They’re setting up an infrastructure here that they plan to use, right? And I think given the current climate in the U.S. it would be hard for them to justify taking that where the strategy clearly shows they want to go,” Webb says.[12]

She also draws parallels between the present day and the U.S.-backed Operation Condor, which targeted leftists, suspected leftists and their sympathizers, resulting in the murders of an estimated 60,000 people, about half of which occurred in Argentina. Another 500,000 were politically imprisoned.[13] 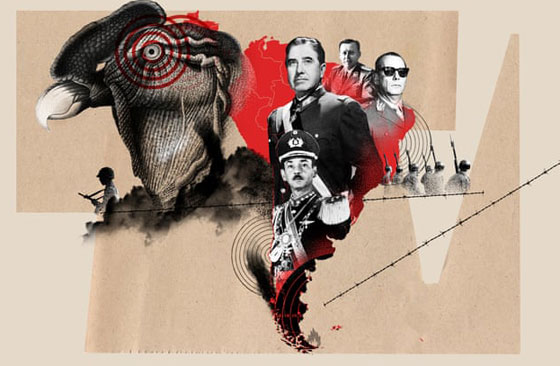 “There was no investigation into whether the claims against these people were even true,” Webb explained. “There were no trials … it was a dragnet to create reorganized society using a climate of fear to encourage acquiescence to authority and complete obedience to the state.”[14] It’s history that often gives the greatest clues about where society is headed, and Webb also details a bill President Biden introduced in 1995 in response to the Oklahoma City bombing.

It was initiated by the FBI as a charter to investigate political groups and included the following disturbing points. Fortunately, the bill wasn’t passed in this version — a lot was taken out and watered down — but if allowed to pass unrevised, it would have:[15]

Silicon Valley Is Fused With the National Security State

Silicon Valley and the national security state are now fused, Webb says. The decades long wars against domestic dissidence have always involved technology like databases, and now the link is inseparable.

Webb wrote about “tech tyranny” at the start of the pandemic, revealing that a document from the National Security Commission on Artificial Intelligence (NSCAI) — acquired through a FOIA request — said changes were needed to keep a technological advantage over China:[16]

“This document suggests that the U.S. follow China’s lead and even surpass them in many aspects related to AI-driven technologies, particularly their use of mass surveillance.

This perspective clearly clashes with the public rhetoric of prominent U.S. government officials and politicians on China, who have labeled the Chinese government’s technology investments and export of its surveillance systems and other technologies as a major ‘threat’ to Americans’ ‘way of life.’”

Many of the steps to implement the program are being promoted as part of the covid-19 pandemic response. NSCAI is not only a key part of the Great Reset’s fourth industrial revolution, but also promotes mass surveillance, online-only shopping and the end of cash while noting that “having streets carpeted with cameras is good infrastructure.”

Meanwhile, Greenwald highlighted a statement by Alex Stamos, a former Facebook security official, who recommends social media companies collaborate with law enforcement to crack down on extremist influencers online, especially those with large audiences in order to “get us all back in the same consensual reality.”[18]

Social Media Plays a Huge Role in the War

If you’re reading this and are concerned, I urge you to listen to the Media Roots Radio podcast with Whitney Webb in full.[19] It’s just under 2.5 hours, but time well spent to understand the historical events that have led us to where we are today. For those who want to take action, a mass exodus from social media platforms is a good start.

The Pentagon pulled the plug on Lifelog February 4, 2004, in response to backlash over privacy concerns.[21] Yet that same day, Facebook was launched.[22]

Lifelog — and likely its successor Facebook — was meant to complement Total Information Awareness (TIA), a program that sprang up after the 9/11 attacks that was seeking to collect Americans’ medical records, fingerprints and other biometric data, along with DNA and records relating to personal finances, travel and media consumption.[23]

Now Facebook is asking users to report “extremist” content and misinformation. Fortunately, there’s a way to passively disentangle yourself from the data mining and legacy social media that is intertwined with the war on domestic terror. Webb says: “Delete your Facebook and your Instagram and your Twitter, because you are feeding the domestic terror machine.”[24]

What Vaccines Say About the Precarious State of Our Freedom

The Great Reset Will Render All Products As Services, To Implement ‘You Will Own…