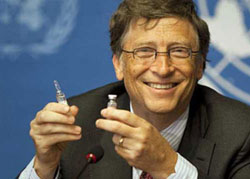 The Bill and Melinda Gates Foundation is praised for its philanthropy around the world, but much of the foundation’s good deeds are merely no-consent vaccine experiments carried out on the poor. Under the pretense of providing healthcare to third world countries, the Gates Foundation instead coerces tens of thousands of children to test out various vaccines for pharmaceutical companies.

Bill Gate’s massive wealth from selling computers is being redistributed to pharmaceutical research, as human rights-violating corporations such as Merck and GlaxoSmithKline test out new vaccines on multiple thousands of unsuspecting victims.

In India, the propaganda campaign was in full force, as the natives were instructed to get their “well-being” shots. The resulting health problems have been noticeable and devastating, raising questions about the sinister motives behind the Gates Foundation and their extraordinary vaccine push.

In 2009, the tribal children of the Khammam district in Andhra Pradesh were gathered together and told they would be receiving healthcare shots. Even though the Gates foundation has the wealth to give these tribes access to clean water, sanitation services, nutrition and low stress living conditions, they instead pushed for HPV vaccines and called them “well-being” shots. The shot these young girls received was an HPV vaccine manufactured by Merck and administered by the state’s health department. The young girls, aged 9–15, were instructed to line up for three doses of the vaccine. As the months rolled on, the health of the 16,000 girls rapidly deteriorated. Five of the girls died shortly thereafter. 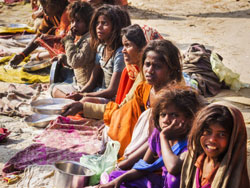 In Vadodara, Gujarat, another 14,000 or more tribal children were put to the test. This time the Gates Foundation carried out their humanitarian healthcare mission by providing the HPV vaccine called Cervarix, made by Glaxo SmithKline. Giving no informed consent, the Gates Foundation coerced the tribal people on the belief that the shots were beneficial and necessary. However, when virus material, heavy metals and other preservatives foreign to the body are injected into young, developing women, drastic changes are bound to occur in their bodies. Having no idea that they were being signed up for vaccine trials, thousands of young girls were injected with these experimental vaccines purported to prevent cervical cancer.

Instead of seeing their health improve, the tribes reported numerous, bizarre adverse events in the days, weeks and months following vaccination. Young girls in India lost weight, appetite and stamina. It also happened to boys. 16-year-old Aman Dhawan had no idea he was even signed up for the vaccine trial. Soon thereafter he began to lose weight and energy, as the life was sucked right out of him. The same problem broke out among girls in Colombia, where the same vaccine had been doled out to the young girls there.

When health reporters and activists visited Andhra Pradesh, they met more than 100 young girls who were now having epileptic seizures, severe mood swings and migraine headaches. The toxins that had been deliberately injected into them caused additional health problems such as early menstruation, heavy bleeding and menstrual cramps – problems the tribes had not experienced before in such severity or magnitude. 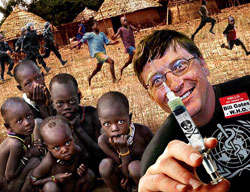 The push was started by the NGO Program for Appropriate Technology in Health (PATH). The group coordinated with the Bill and Melinda Gates Foundation to test the cervical cancer vaccines on thousands of young females across India and Africa. The Gates Foundation has also coordinated with the NGO to study the effects of the Rotavirus and pneumococcal vaccines in Africa and Asia.

Whistleblowers from another NGO, Sama, witnessed the horror and spoke out about what was really going on, revealing how the young girls were being used as guinea pigs for vaccine trials all under the guise of receiving healthcare. Sama reported that the administers of the vaccine were giving no informed consent; in fact, authorities made the people give thumb prints, treating them as subjects, not intelligent human beings with human rights.

When billions of dollars are behind a mission, authorities will gladly follow along and do as they are told. Testing chemicals and viruses out on human subjects is easy in third world countries where human life seems to be expendable.