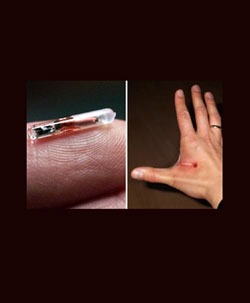 According to a prediction that was made by the NBC, in 2017 all Americans will be tagged with microchips. These microchips will help the authorities to identify individuals almost immediately. This technology will also be able to determine if people are really who they say they are.

However, many people are seriously worried about these microchips. Namely many people believe that this RFID microchip will give the government too much power, allowing them to track every move. In addition, you must know that in some states, for example Virginia, legislation is in process to stop this from happening.

Apparently, an RFID brain chip has been developed. This chip was being tested on several humans.

It was reported that the use of microchips in Bill H.R. 4872 was located under National Medical Device Registry and it tells about a “Class II Device That is Implantable”. And yes, they passed the bill. Read Class II Special Controls Guidance for FDA Staff where they regulate the use of microchips.

At this point you must know that by having the RFID microchip in you, your every single step can be followed. Many claim through these chips, the government will also control your diet and your money. Some of the people fear that these microchips can even kill people who don’t obey the authorities.

Now would you agree to this? Is it too much? Will this jeopardize your privacy?

Many people are against this decision. They think that by having this chip implanted in them, they will lose their privacy. Also they think that they will be watched all the time.

How to Use Brainwaves to Expand Your Consciousness