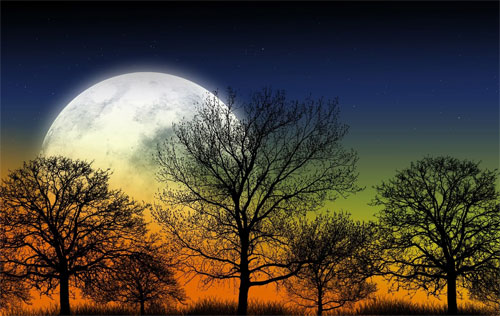 In Druid culture, trees were thought to contain spirits and vast amounts of knowledge and wisdom. In Celtic astrology, trees as a whole symbolize life, death, and renewal. The Druids gave different types of trees meanings according to their qualities, which they noticed matched different children’s qualities according to their birth dates.

Within the Celtic astrology, the calendar year is broken down into 13 parts (or months). Each month is then associated with a different tree.

Since this is a time of immense darkness with little sunlight, the Druids felt that the Birch babies were always stretching themselves thin in search of the light. If you are a Birch baby, you are said to be highly driven, motivational, and ambitious. Birch signs are said to be tough, resilient, natural rulers and leaders, charming, and crowd-pleasers.

According to the Druids, Rowans are known for their philosophical, visionary minds and their creativity, originality, aloofness, and inner passion and motivation. Many see Rowan babies as having a cool exterior because they keep these passions to themselves and often seem aloof in conversation. Their presence can transform energy in situations, as their quieter ways can be highly influential due to their uniqueness. They may dislike restriction and conformity, as they are “out-of-the-box” thinkers.

Just as the title sounds, Celtic tree astrology says that the Ash are free-thinkers, enchanting, imaginative, intuitive, artistic, and “see the world in colour.” They can be somewhat moody, but are very inspired by nature and enjoy art, writing, science, and spirituality. Some may see the Ash as being reclusive and introverted, but in reality, they just love the world they’ve created for themselves! Great at balancing their artistic and intellectual sides, they are both idealistic and realistic.

To the Druids, Alders could easily find their true paths and weren’t afraid to follow them. They blaze ahead with a passion, often gaining followers and supporters. They are charming and easy to talk to, the kind of people who can seemingly get along with anyone. Alders are often very confident, focused, self-assured, and non-superficial. Alders don’t like to waste time either, as they’re brave, competitive, and make great parents and entrepreneurs.

According to Celtic astrology, Willows are very connected to the moon, and are highly creative, intuitive, intelligent, realistic, and patient. To the Druids, Willows could be very psychic and had a good understanding of cycles and seasons. They love gaining more knowledge and have great memories. Their greatest enemy is themselves, as their fears can hold them back. Apparently they place high value in family and can make great teachers.

According to Celtic astrology, Hawthorns are typically very different on the inside than what the general public assumes them to be like, completely embodying the phrase “Never judge a book by the cover.” They are passionate, creative, curious, great listeners, insightful, funny, and great at seeing “the big picture,” but you may not truly know who they are. They are great at performing, especially in front of crowds, given their “illusionist” persona.

Oak signs are said to be strong, protective, nurturing, generous, helpful, confident, and optimistic that “everything will work out.” Oaks love learning about history and ancestry, as they have a great respect for it, which is why they also tend to make great teachers. Oak signs apparently love structure and enjoy feeling in control, especially when it comes to their own lives. They love having large families and enjoy being involved in their communities. 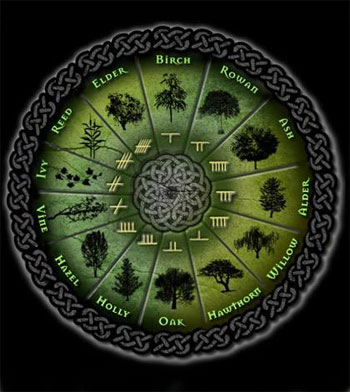 To the Druids, Holly signs were noble, natural leaders and people of power, and welcomed a good challenge. Holly signs can tackle any obstacles and complete any tasks, as they’re dedicated to achieving their goals. They’re competitive, ambitious, confident, but also generous, kind, and affectionate. Things come to them fairly easily and as a result, they can be very interested in academia and seem naturally gifted. They can be perfectionists and have no problem taking a supporting role as opposed to a leadership one.

Within Celtic astrology, Hazels are typically intelligent, organized, efficient, academic, and, as they have excellent memories, very skilled at reciting and recalling information. They like to be well informed and can often appear to be “know-it-alls.” They can be detail-oriented, which can even be somewhat obsessive/compulsive. They enjoy anything to do with numbers, science, and analytics, and support rules. They are great planners and organizers!

Given the changing of seasons, the Druids believed that Vines’ personalities were just as fluid and changeable as the seasons. They can be unpredictable and contradictory to themselves as well as indecisive. However, this comes with its benefits, since they can easily see both sides of a story and don’t like to pick sides, making them very empathetic. Prone to mood swings, they can also be charming, elegant, and, despite their fluidity, often have distinctive tastes and prefer refinement. If you’re a Vine, you may prefer “finer things” like food, wine, music, and art.

Ivy signs are typically compassionate, loyal, giving, helpers, spiritual, soft-spoken, and charismatic. They are able to hold their own in social settings. The Druids believed that since they are born at a time of the “waning sun,” life can seem more difficult to them at times, which many Ivy signs may deem unfair to them. However, this sign is often very graceful in overcoming obstacles as they have a steady stream of energy.

Celtic astrology says that Reeds are great at keeping secrets and they also love to uncover them, as they are truth seekers. Reeds will always dig down to the heart of the matter and love a good story, so they’re easily drawn to gossip, scandals, legends, and conspiracies. However, this makes Reeds excellent journalists, detectives, etc. Reeds are people lovers because they represent mysteries for them to uncover. Reeds can be a bit manipulative, but are typically harmless in their actions. They have a strong sense of truth and honour and can be jealous.

Elders tend to be free spirits and thrill-seekers. Since Elders are born at a time where the light is “fast fleeting,” Druids believed that Elders take that same approach to life, often living “in the fast lane.” Elders may seem like they’re extroverted, but in reality they can be withdrawn, thoughtful, and philosophical. Elders can be very helpful, honest and, outspoken, with the tendency to assume they’re always right due to their intellectual nature.

Can Prayer Improve Your Sleep?

The Love Affair between Saffron and Humanity: As Ancient as Time Itself