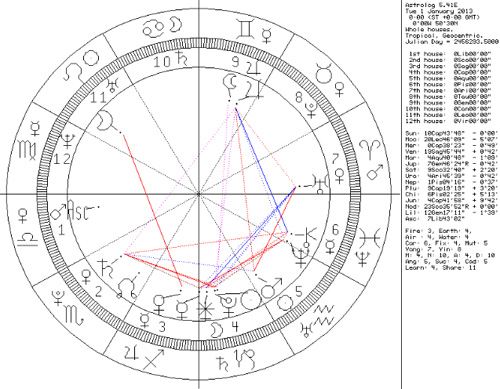 Although the moment of the New Year, calculated for the meridian 00° of the planet, has very many aspects which are worthy of interpretation (e.g. there are present both planetary configurations known as Chicken wings, or two minor triangles having Pluto and Uranus as focal planets), we focused our attention on and therefore, we dealt only with the astrological aspect of mutual reception which is usually quite rare as it is present now, but which generates a synergistic effect worthy of all our attention. A similar situation occurred in early 2006, when there were three mutual receptions: Jupiter-Pluto in the zodiac signs Scorpio-Sagittarius, Uranus-Neptune in the zodiac signs Pisces-Aquarius and Sun-Saturn in the zodiac signs Capricorn/Aquarius-Leo. The moment was marked by clear events both in the Cosmos and on Earth (e.g. the Earth stopped its balance for a considerable period of time and authentic spiritual schools gained momentum only seemingly inexplicably).

Not at all accidentally, in 2013 the year of the Great Beginning, at the moment of the New Year there takes place the “concurrency” of the Martian zodiac signs that we can regard as the symbolic struggle between Light and Darkness, between the New and the Old, the Beginning and the End: the mutual receptions Mars-Uranus and Pluto-Saturn.

The mutual reception Mars-Uranus takes place in the zodiac signs Aquarius-Aries (signs of expression of the Elements Air and Fire, of YANG energetic polarity, masculine, solar, emissive), each planet being in the domicile of the other. We can consider this mutual reception as a bearer of the energy of light, freedom, spontaneity and beginning.

The mutual reception Pluto-Saturn takes place in the zodiac signs Capricorn-Scorpio (signs of expression of the Elements Water and Earth, of YIN energetic polarity, feminine, lunar, receptive), each planet being in the domicile of the other. We can consider that this mutual reception indicates the energy corresponding to inertia, careerism, aberrant thirst for power and enrichment, conservatism, destruction, old, and the end.

Pluto is the higher octave of Mars, the traditional governor of Scorpio.

Uranus is the higher octave of Saturn, the traditional governor of Aquarius.

It is worth remembering the sextiles Saturn-Uranus-Pluto and Mars and the squares Mars-Saturn and Uranus-Pluto, as a last detail concerning these planetary pairs.

I will offer now two more technical astrological observations before moving to “decrypting” them in terms understandable for everyone.

1. The presence of Jupiter, the traditional governor of the zodiac sign of Pisces, in Gemini, where it manifests the energetic quality of “exile”, while Neptune, the modern governor of Pisces, is in Pisces and at home.

2. Jupiter sextile Uranus trine Mars, but Neptune has no relationship with the mutual reception Saturn-Pluto at the moment of the New Year, but much later in 2013.

It is enough only to say that, indeed, the year 2013 is the year of the Great Beginning, where everything meant to end will end, where everything that started will continue with an unstoppable force, and in this battle are involved, on one hand, the conservative occult forces of the World (the mutual reception Pluto-Saturn) and, on the other hand, the beneficial forces of Light and mass spiritual awakening (the mutual reception Mars-Uranus).

The quadrature relationship between the governors of the zodiac sign Pisces (Jupiter-Neptune quadrature) and the difference in energetic quality between them (Jupiter in exile and Neptune in domicile) bring face to face “the universal peace maker” which is Neptune and the “the great teacher, the great chance” that is Jupiter. However, Neptune equally indicates policy and politicians and Jupiter indicates laziness, inertia and exaggeration. We can either have the revelation of uneducated and stupid politicians (Jupiter-Neptune quadrature with Jupiter in exile in Gemini) or of some young politicians (the sign of Gemini) well-intentioned in their inner forum (Neptune at home, but unsupported by anything). Or we can also have great and true revelation of some authentic spiritual teachers (Jupiter in Gemini and Neptune in Pisces), yet occulted (Jupiter in exile conjunct with Lilith) whose enemies are the politicians and governments in general (Jupiter –Neptune quadrature).

The relationship of Jupiter with Uranus and Mars, healthy, positive, harmonious relationships, indicate people’s massive active and deliberate orientation (Mars in Aquarius) towards spiritual schools that allow a proper understanding of the human being and its free relation (Uranus) with God, this orientation and mass awakening being the result of the work and role of a spiritual guide who is an exceptional spiritual divine hero (Uranus in Aries) that sheds a new, original and universal light (Aquarius) over ancient doctrines powerfully able to transform absolutely everyone who truly seeks and wishes to find God (Mars in Aquarius).

It is true that the false prophets, snobs, dilettantes, bigots, the semi-educated of this world will still be present; it is true that the forms of Power will not stop from playing their dirty roles, but they will no longer have the power and success as before. We expect Justice to be the first social institution to record its lamentable ending, being an institution foreign to the interests of planet Earth, as long as it sought to replace the divine correct laws with human, dirty, complicated laws, foreign of any justice and truth. We expect the Church to also fall into an unexpected decline due to its dogmatic, superficially spiritual, limited, narrow attitudes; a social institution full of indoctrination and compromised due to the Inquisition episodes of the mid of the second millennium, as well as the social institution of Justice. The enemies of authentic spirituality are much more numerous than its followers, but it is already certain that society needs real spiritual masculine role models, clean truly solar male models and especially models offering safety and protection. Jupiter enters the zodiac sign of Cancer (zodiac sign by definition of the crowd, of the masses, like the zodiac signs Virgo and Pisces) in early June 2013 for a year, as well as the Great Pyramid of Water that it will form with Saturn in Scorpio and Neptune in Pisces makes it clear that GOD’s Will becomes active, that GOD ends his occultation period and the Light begins slowly but surely to overcome darkness. Any kind of darkness.

As the New Year began, the masculine planets (Sun, Mars, Saturn) and the feminine ones (Moon and Venus) were in harmonious and beneficial relationships, but without interacting with each other, meaning that the feminine planets  didn’t form aspects with the masculine ones, considering that  the chart of the moment does not contain absolutely any opposition. Mars forms beneficial aspects with Jupiter and Uranus, on the background of his squaring with Saturn.

In contrast, Jupiter maintains squares to Neptune and Chiron, while Uranus in Aries squares the “guests” in Capricorn – Mercury, Juno, Pluto, and the Sun.

The planets of the intellect and intuition are also somewhat divided as Mercury, just like Mars makes a nice sextile to Neptune and a powerful square with Uranus, indicating the predominance of the intuitive or extrasensory perceptions over reason and discursive critical thinking.

In short, then:
1. We enter a year in which polar opposite couples somehow seek identity, the need for personal fulfillment, love slowly becoming a major aspect of life which fundamentally depends on maintaining the dominant polarity of the two – YIN predominant aspect (feminine, receptive, lunar) for women and YANG predominant aspect (masculine, emission, solar) for men. The masculinization of most women and the alarming feminization of men is, so to speak, the true pole shift that puts the current human society in danger for the times to come. The beneficial astrological aspects Moon-Venus and the beneficial aspects Sun-Pluto, Sun-Saturn, Saturn-Pluto, Mars-Jupiter and Mars-Uranus show exactly this – the need to redefine the genders, to resettle them in their natural typology established by GOD, in order to be able to return, some together with others and others with others, to the state of harmony, to the state of complementary, the state of intense, broad and deep polarization which makes a loving couple, or husband and wife, be able to have access to happiness, mutual erotic fulfillment, to restore the primordial androgynous.

2. We enter a year which confronts spiritual groups of an excellent human quality or harmoniously spiritually awakened human beings (Mercury-Neptune sextile) with falsely spiritual groups, of an evil orientation, or human beings of a staggering ignorance and stupidity (Mercury-Uranus square) that can appear over night involved in a kind of a replay of the religious turmoil from the beginning of the first millennium, when fanaticism of all kinds led to persecution of the Christians and the burning and destruction of large libraries, of priceless works. Perhaps, in such circumstances, the Church will have to redefine their status – if it remains a state apparatus or finally chooses to be truly with the people – in order not to repeat the shameful period of the Inquisition.

3. We enter a year in which each of us will make great effort to transform or, conversely, will manifest resistance to the new according to our own power and aspiration. Socially, we dare believe that the armed forces will create various alliances to break the cohesive and already mouldy yeast of the evil oriented governments that rule the world, while their leaders will shamelessly show their true face by lying, institutionalized corruption, betrayal and moral destruction, aggressive and dirty attacks against their own people. However, knowing that “drop by drop is flood”, to the extent that more and more of us will put GOD first in our lives we will all witness the divine intervention in our lives, both individually and collectively.

What is also interesting is the Moon-Venus trine relationship in the zodiac signs Leo-Sagittarius, Signs of expression of the Fire Element and YANG energetic polarity, a very special relationship and somehow “isolated” because they make no other relationship with any other planet (if we consider the strict planetary orbs). So we can expect women to be extremely active and solar in 2013 and to play a major role in the planetary transformations that are felt increasingly more from now on and more and more powerfully from one year to another.

How we can easily, rapidly, profoundly and permanently awaken and activate the state of SHAKTI