A wave of startups wanted to make brain-computer interfaces (BCI) accessible without needing surgery. Just strap on the device and think.

The quest to meld conscience and machine dates back to at least the 1970s, when scientists began, in earnest, to drill into peoples’ skulls and implant the first brain-computer interfaces – electrodes that translate brain cell activity into data. Today, BCIs can regulate tremors from Parkinson’s disease and restore some basic movement in people with paralysis. But they are still surgically implanted, and still quite experimental. Even so, the likes of Musk already envision a future where we’ll all have chips in our brains, and they’ll replace our need for keyboards, mouses, touchscreens, joysticks, steering wheels, and more. 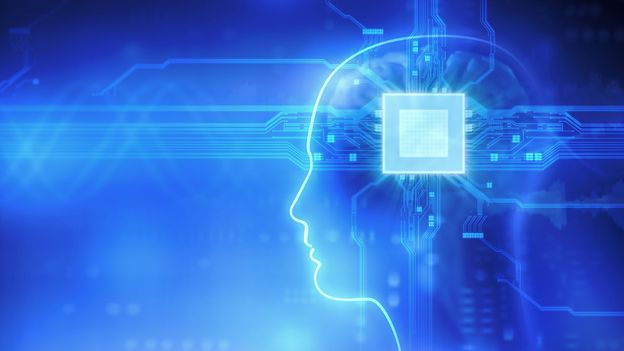 Of course, that won’t occur anytime soon. The mysteries of the conscience remain vast, and implanting hardware in healthy brains – well, forget about that. In the meantime, a wave of companies is betting on bringing Conscience Control Lite to the masses with a neural interface that requires no surgery at all.

That’s where Kouider comes in. His startup, NextMind, makes a noninvasive neural interface that sits on the back of one’s head and translates brain waves into data that can be used to control compatible software. Kouider’s vision begins with simple tasks (sending text messages with a thought; calling up a specific photo in your camera roll with passing thoughts) and ends somewhere close to science fiction (controlling every device in our world, like the sorcerer in Fantasia). “This is real,” he said onstage at Slush, “and the possibilities are endless.”

Going the nonsurgical route comes with some trade-offs, namely all that skin and bone between your soggy brain and any device that’s pursueing to read the neural signals it emits. On the other hand, it’s cheaper, it’s safer, and it’s much easier to iterate or push software updates when you don’t need to open someone’s head. And for all the promise of BCIs, people first need to see that this stuff can be useful at all. For that, devices like NextMind’s do the trick.

The NextMind device is basically a dressed-up electroencephalogram, or EEG, which is used to record electrical activity in the brain. It’s not so different from the tools Kouider used as a professor of neuroscience before he ran NextMind. His lab, in Paris, specialized in studies of consciousness. In a hospital setting, EEGs often require the use of gel and some skin preparation, but recently researchers have developed functional dry electrodes that only require contact with the skull. The NextMind device uses these, along with a proprietary material that Kouider says is “very sensitive to electrical signals.” He didn’t reveal what exactly the material is.

The device weighs 60 grams, about as much as a kiwi fruit, and bears a passing resemblance to flattened TIE fighter. The device is placed on the head; it comes with little comb-like teeth that brush through hair to hold the device in place, right on the back of the skull. Kouider, who is bald, wears it clipped to the back of his hat. There, the device’s electrodes are well positioned to record activity from the visual cortex, a small area in the rear of the brain. Then it translates the signals to digital data, processes them on the computer, uses a machine learning algorithm to decipher them, and translates those signals into commands.

Then it is used a laptop, for a calibration exercise to create the “neural profile” – in essence, how the personal visual cortex lit up in response to the eyes focusing on specific things – it is followed a series of flashing triangles around the screen; you only have to do this once, and only for a couple minutes. The NextMind device is designed to work on anyone, but it works faster when someone has had practice. Kouider says it’s about a neural feedback loop: Ah, when the person focus on that, then that occurs on the screen.

Neural profile generated, the person is ready to play some games. NextMind announced its developer kit in January 2021. In an effort to court developers, the company has designed a few demos to show off what its device can do. An investigator pursued to see how it works one such device that’s a riff on Nintendo’s Duck Hunt, which Kouider played as a kid. As ducks danced across the screen, Kouider leaned over. “Aim to shoot him,” he whispered, “with your brain”. The investigator focused his gaze on the ducks and, in less than a second, they exploded. This little magic trick was repeated through a series of demos. Then he changed the channel on a mock TV set by glancing at one corner of the screen. He cracked a digital vault by concentrating on the right numbers on a pincode. He modified the colors on a set of smart lightbulbs that Kouider had set up for the investigator. “It’s hard to say why you’d need to do these with your conscience, but when you do, you really feel like a Jedi” said the investigator.

NextMind isn’t the only company aiming to develop, for the masses, noninvasive BCIs. Another startup, CTRL-Labs, released a developer kit in 2020 for a similar noninvasive neural interface. It also uses dry electrodes, but this device is an armband and captures signals from nerves. Facebook acquired the company for close to $1 billion in September 2020.

In the second half of 2020, this investigator had a chance to exercise on CTRL-Labs’ device himself. The demo was designed to show off the company’s vision: “The question at CTRL-Labs is not, how do we make our devices more capable?” as cofounder Thomas Reardon told an audience at Slush in 2018. “It’s, how do we ourselves become more capable?” He strapped the device to his arm and played some games. One involved a dinosaur jumping over a series of obstacles. The investigator thought jump and, with just a twitch of the arm, the dinosaur jumped. At one point, Patrick Kaifosh (then CTRL-Labs’ CTO, now Facebook Reality Labs’ research manager) entered the credentials to unlock his laptop by simply staring at it. “Neuroauthentication”, he called it.

That device, like most of the work in BCIs, makes use of the motor cortex, the part of the brain that manages movement. Reardon’s breakthrough was in singling out the neurons in the spinal cord, which send electrical signals to the arm and hands, rather than going to the brain region itself. Most of the clinical work around BCI also involves the motor cortex, in part because so much of the research has focused on movement disorders: Parkinson’s, paralysis, and so on. But Kouider thinks the visual cortex offers a richer set of neural signals for people aiming to control their personal devices. When the investigator asked him why so much of the work was being done in the motor cortex, he paused, and then said, “I think that’s because they’re making a mistake.”

Because the NextMind device utilizes signals associated with sight, the technology can feel a little like gussied-up eye-tracking. So what if you can modify the channel with your eyes? People have been doing that for years. After the demo, Kouider claimed his BCI could work even if the investigator would close his eyes. Right now, the human being can control things with its gaze. Soon, Kouider believes, the device will be able to tap into personal imagination, turning visual thoughts into actions.

The problem with some of these BCI devices, though, is not whether they can become fast enough to enhance gameplay or control smart-home devices. It’s whether anyone cares to. InteraXon, a Canadian startup, used to make a head-worn device that could control lights with the power of thought but eventually gave it up. “Frankly, you could just turn the switch with your hand much more readily,” the company’s cofounder, Ariel Garten, told Scientific American. While, arguably, there would be accessibility use cases for this technology, InteraXon pivoted to make Muse, a meditation headband.

As he gins up interest in his developer kit, Kouider is pitching the idea that NextMind’s device and other noninvasive neural interfaces of its ilk will be like the touchscreen, or the computer mouse: the thing that upends the way we interact with our personal technology. At this early stage, though, BCI is more like the virtual-reality headset than the Next Great Interface: conscience-blowing in their demos, but easy to put back in the box.