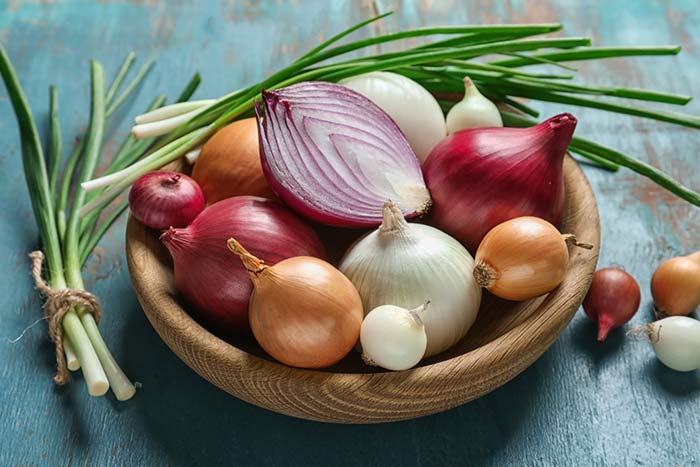 Many experts believe that the first onions appeared in Central Asia. Most agree the vegetable has been cultivated for nearly 5,000 years and might be one of the first cultivated crops since they are easy to grow and transport, and have a long shelf life.

Pliny the Elder catalogued how Romans used onions in Pompeii before being killed by the volcano. His documents showed that onions’ curative powers included the ability to induce sleep, heal toothaches and mouth sores and address vision problems. Others have documented their use in the treatment of headaches and heart disease.

In the Middle Ages, onions were used to help relieve headaches, hair loss and help to pay the rent. The first pilgrims brought them on the Mayflower to America to cultivate, where they became one of the first products brought to market in New England.

Onions are a member of the allium family, which also includes garlic, leeks, shallots and chives. About 125,000 acres produce 6.2 billion pounds of onions each year in the U.S. The top producing states are California, Eastern Oregon, Idaho and Washington.

Other countries producing a large number of onions include Turkey, Pakistan, China and India. According to Live Science, the average person in the U.S. eats 20 pounds of onions each year.

It’s likely the many health benefits derived from eating onions comes from the nutrient value of the vegetable. One small onion has just 28 calories, 6.5 grams (g) of carbohydrate and 1.1 g of total fiber. It also contains:

Onions are also surprisingly high in beneficial polyphenols. This group of plant compounds plays an important role in the prevention and reduction of diabetes, cancer and cardiovascular diseases. In a comparison of the polyphenol and antioxidant capacity between red and yellow onions researchers found the outer layers of the onions had the highest number of total polyphenols and flavonoids.

In addition to the calcium content promoting strong bones, onions may also relieve oxidative stress, which in turn decreases bone loss and can help prevent osteoporosis. Onions are also good sources of vitamins A and K, which in addition to vitamin C help protect your skin from ultraviolet rays. Vitamin C also helps your body produce collagen, a structural support for your skin and hair. 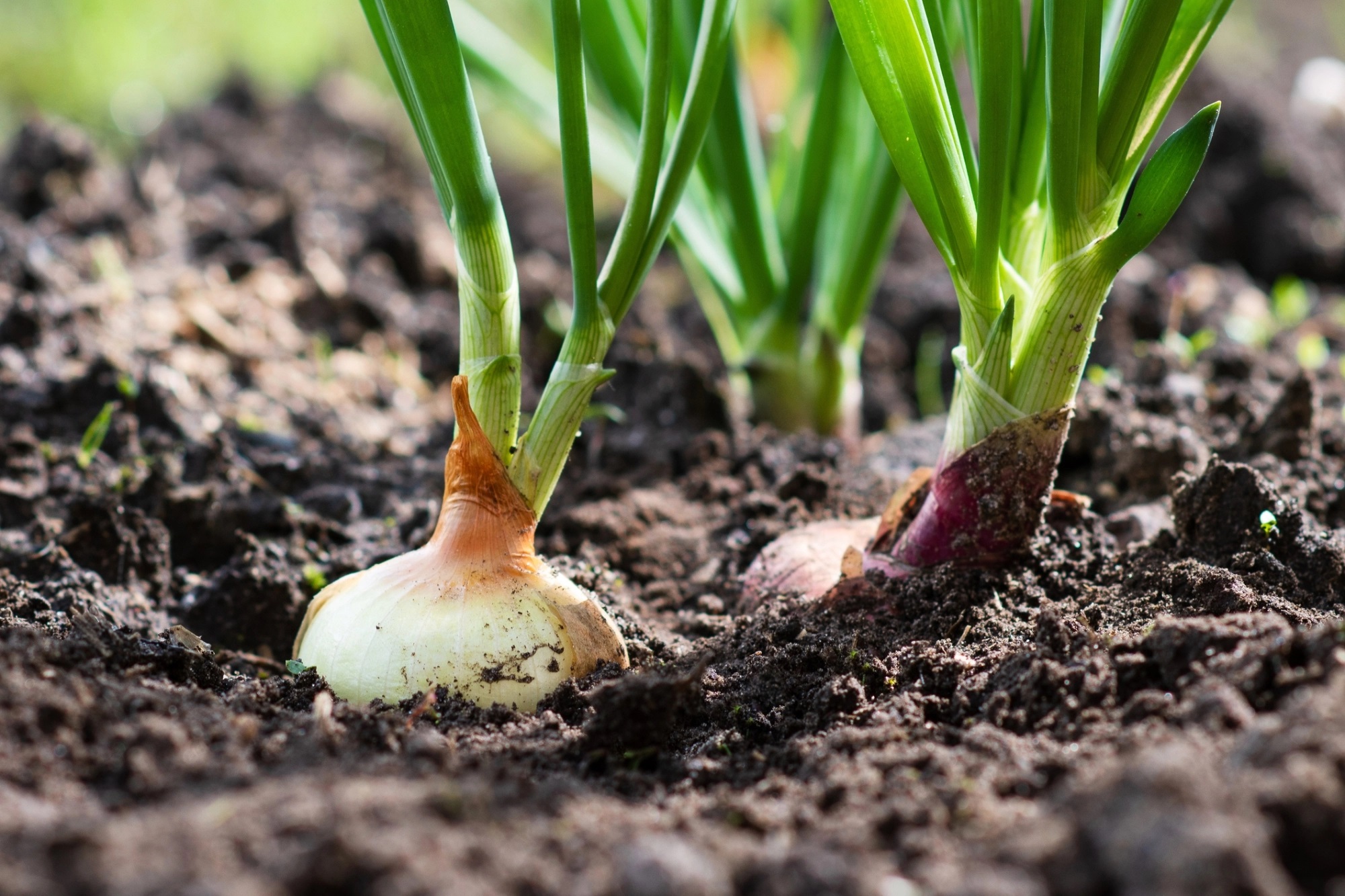 Prebiotics are indigestible fiber that help nourish the beneficial bacteria in your body. In turn, these bacteria help with digestion and absorption of your food, as well as play a significant role in the function of your immune system. One of these prebiotics is inulin, a water-soluble form of dietary fiber that’s found in onions.

Your gut thrives on adequate amounts of fiber as it helps improve digestive health and relieves constipation. In one study, researchers found those who took inulin had bowel movements with improved stool consistency, and another four-week study showed older adults experienced better digestion with less constipation.

In addition to feeding the beneficial bacteria in your gut microbiome, inulin also demonstrates the ability to promote weight loss and reduce liver fat cells in people who are prediabetic.

Since inulin is colorless, has a neutral taste and is highly soluble, manufacturers are adding it to food products to help increase the fiber content of processed foods. In a review of inulin studies published in U.S. Pharmacist, the data showed inulin also has an effect on mineral absorption and a potential effect on lipid levels. Several studies showed it helps improve calcium absorption, which is highly beneficial in the onion since it is also a rich source of calcium. Overall, the data on the effect on lipids were mixed as most studies had a small number of participants. However, past research has shown that soluble fiber does lower lipid levels.

In one study of women who had Type 2 diabetes, the researchers found those who used insulin had better glycemic control. It also appears that flavonoid-rich foods such as onions may help inhibit the growth of H. pylori, a type of bacteria responsible for most ulcers.

Allium vegetables are popular in different dishes worldwide and some epidemiological studies have found an association between people eating large amounts of allium vegetables and a reduced risk of cancer, particularly in the gastrointestinal tract.

The majority of these studies have come from mechanistic research, or studies that are “designed to understand a biological or behavioral process, the pathophysiology of a disease, or the mechanism of action of an intervention.”

Some of these have been clinical trials evaluating the mechanism sulfur compounds in allium vegetables have on bioactivation of carcinogens and antimicrobial activities. In a review of the literature, researchers found: “Allium vegetables and their components have effects at each stage of carcinogenesis and affect many biological processes that modify cancer risk.”

In early 2019, a study published in the Asia-Pacific Journal of Clinical Oncology revealed the results of an analysis of 833 patients with colorectal cancer who were matched against an equal number of healthy controls. Demographic and dietary data were collected using interviews.

After the analysis, the researchers found that adults who ate high amounts of allium vegetables had a 79% lower risk colorectal cancer. Dr. Zhi Li, of the First Hospital of China Medical University, was the senior author, who commented on the results saying: “It is worth noting that in our research, there seems to be a trend: the greater the amount of allium vegetables, the better the protection. In general, the present findings shed light on the primary prevention of colorectal cancer through lifestyle intervention, which deserves further in-depth explorations.”

Angela Lemond, spokesperson for the Academy of Nutrition and Dietetics, agrees that foods high in antioxidants and which are “one of the richest sources of dietary flavonoids,” are important to good health: “Foods that are high in antioxidants and amino acids allow your body to function optimally. Antioxidants help prevent damage, and cancer. Amino acids are the basic building block for protein, and protein is used in virtually every vital function in the body.” 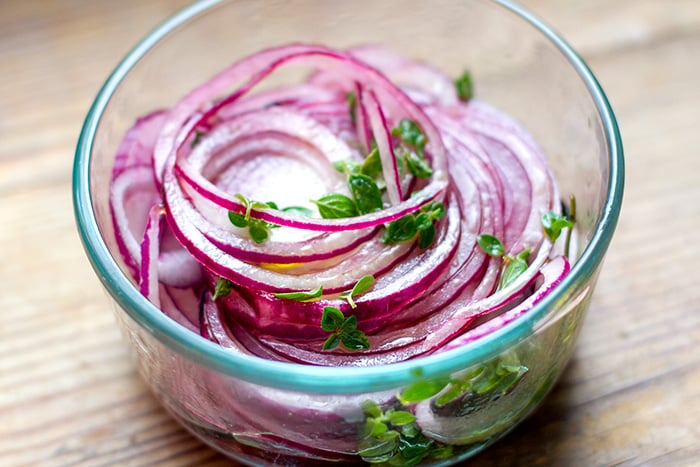 Quercetin is another compound found in onions that is linked to a large number of health benefits. This single antioxidant flavonoid is found in high concentrations in onions. Researchers have found some onions store quercetin in the outer layers and others have higher concentration in the inner layers.

In one review of the literature researchers evaluated the anti-obesity activity of onions and their effect on related comorbidities. Analysis revealed studies that demonstrated “quercetin-rich onion peel extract” could inhibit fat cell generation in the lab and an animal model.

Quercetin in combination with vitamin C has a powerful effect on your immune system and specifically to help prevent Covid-19. Since 1 cup of chopped onions provides 13.11% of your recommended daily amount of vitamin C, onions are a healthy addition to your daily nutritional intake. The benefits to your immune system are extensive and include: “Quercetin is known for its antioxidant activity in radical scavenging and anti-allergic properties characterized by stimulation of immune system, antiviral activity, inhibition of histamine release, decrease in pro-inflammatory cytokines, leukotrienes creation, and suppresses interleukin IL-4 production.

It can improve the Th1/Th2 balance, and restrain antigen-specific IgE antibody formation. It is also effective in the inhibition of enzymes such as lipoxygenase, eosinophil and peroxidase and the suppression of inflammatory mediators.”

How to pick, peel and store your onions

Whether you’re harvesting from your own garden or selecting onions at the grocery store, use those that are dry and firm. Although they have a long shelf life, once they reach the end the flesh begins to get soft and moist. The onion should have little or no scent before you begin cutting.

As you peel the onion, take off the least amount of skin from the outer layer. As with many other vegetables, the outer layers are packed with antioxidants, which are best used in your meal and not in the garbage or compost pile.

The chemical properties of onions that make them savory are the same that trigger your tears as you’re peeling and chopping. These are sulfur compounds the plant uses in chemical warfare against predators. As you slice an onion, it produces a sulfur-based gas. This reacts with your tears and forms the familiar irritation triggered by a sulfenic acid substrate.

To reduce the effect, pursue standing farther away so as the gas is released it disperses before reaching your face. You can also pursue cutting onions in front of a fan that blows the gas away from you.

Pursue refrigerating the onions for 30 minutes and leaving the roots intact as you’re cutting and peeling. According to the National Onion Association, the roots have the highest concentration of sulfur.

Onions should be stored in a cool, dry and well-ventilated area. Instead of a plastic bag, consider wrapping each in a paper towel before placing in the refrigerator. The sweeter the onion, the higher the water content, which means sweet onions have a shorter shelf life than other types of onions.

If learning about the health benefits of eating onions has inspired you to include them in your meal planning, then you’ll want to check out the National Onion Association Guide to help choose the different types of onions, their flavors and how they are best prepared.