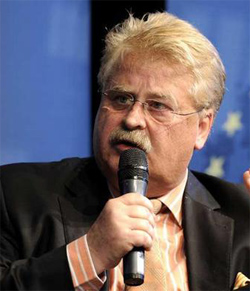 In an ongoing attempt to suppress genuine spirituality, parts of the Romanian media are constantly attacking the yoga movement MISA and its supporters. Now the situation is again being taken out of the local arena with attacks being made on anyone who dares to raise the problem at an international level. This has been done before and now they are striking again. And now it’s the turn of MEP Elmar Brok to stand in the Romanian media spotlight.

In relation to Romania joining the European Union, Brok has openly criticized the system in Romania several times, but now he is being publicly attacked for suggesting that Eastern European immigrants, namely Romanian and Bulgarian, be fingerprinted when they enter Germany.

Brok told newspaper Bild, “Immigrants who only come to Germany for Hartv IV (unemployment benefits), child benefit and health insurance must be sent back quickly to their home countries. To prevent multiple entries we should think about taking fingerprints.”

In Romania this has provoked a completely illogical and disproportionate media frenzy. It is important to note however that Brok did not make this statement as an MEP but rather as a German citizen, concerned for the well-being of his countrymen and the maintaining of a certain standard of living in his country.

Unlike other nations, Brok did not say that Romanians should not come to Germany, or that the market for Romanians should be closed like they have said in other countries, he merely proposed measures for safeguarding well-being and security, echoing the sentiments of any concerned citizen. The reason behind this disproportionate media attention on Elmar Brok is that he recently wrote another letter requesting transparency in the case against Gregorian Bivolaru and MISA. However, the Romanian media conveniently does not say a word about this, they just publicly denounce Brok and the way in which they attack him actually reveals what is behind this whole media circus.

By putting the problem like this, they automatically incriminate anyone who publicly shows support for justice to prevail in the Bivolaru case. This shows the depth of the ties within the corrupted system which the Bivolaru case is revealing. 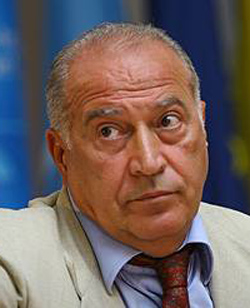 I have done some research into the media behind these attacks. Intact is the corporation responsible for the big TV channels in Romania and the media group behind all these stories. The main man behind this company is Dan Voiculescu, who was in charge of the Securitate during 1989. He was the Director General of Cyprus-registered company, Crescent Commercial and Maritime LTD which was administrating all the funds of Securitate, establishing the conservative party and a media empire after 1989. They were making huge amounts of black money. He has recently been proven to have been a collaborator of Securitate. Not by coincidence this is the media that perpetrates the most violent attacks on Bivolaru/MISA. Therefore, people orchestrating these attacks are on the payroll of important players of the secret services games, same people that were behind the MISA files. Can this be a coincidence?

The implications of all the networking which time and again is surfacing in this campaign. Now the latest stunt is to attack a political figure who has not been violent or aggressive in any way but has only spoken in support of the fair treatment of Bivolaru in his trial. They don’t dare however to say that he has recently spoken against the mistreatment by the Romanian authorities. Elmar Brok, however, is not the only MEP to have shown support for the fair and just treatment of MISA yoga school. The Romanian media is conveniently forgetting to mention that many other MEPs have shown their support for the school over the years. It is just because Brok is a more prominent figure that he has become the scapegoat and the focus of media attention now.

Here are some letters Elmar Brok write it over the years regarding yoga school teacher Gregorian Bivolaru:

I have been contacted about the case of the Romanian leader of a yoga movement, Gregorian Bivolaru.

Please keep me informed before any action is taken. 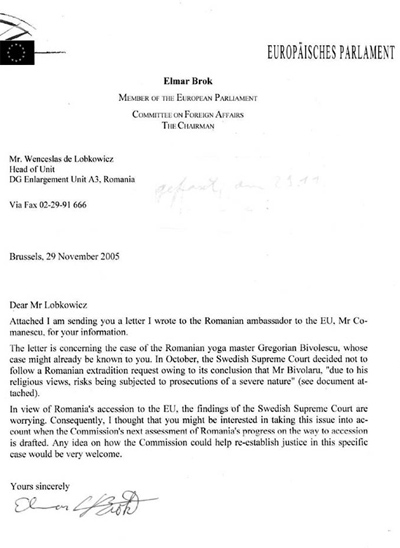 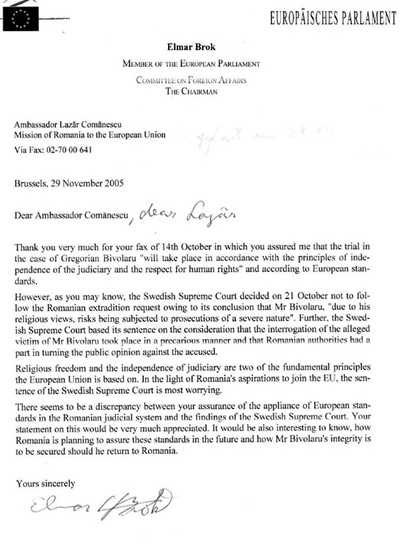 Always accept reality just as it is!