Evidence for the Strange Idea that the Universe Is a Hologram 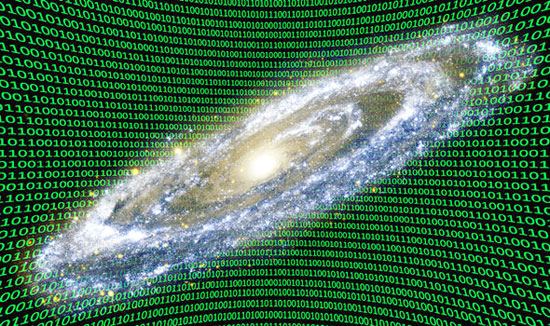 One of the great mysteries of modern cosmology is how our universe can be so thermally uniform – the vast cosmos is filled with the lingering heat of the Big Bang.

Over time, it has cooled to a few degrees above absolute zero, but it can still be seen in the faint glow of microwave radiation, known as the cosmic microwave background. In any direction we look, the temperature of this cosmic background is basically the same, varying by only tiny amounts. But according to the standard “cold dark matter” model of cosmology, there wasn’t enough time for hotter and cooler regions of the early universe to even out. Even today we would expect parts of the cosmic background to be much warmer than others, but that isn’t what we observe.

One solution to this cosmological problem is known as early inflation. If the observable universe was extremely tiny in its earliest moments, it could have reached a uniform temperature very quickly. Afterwards, the theory says, the universe underwent a brief period of rapid expansion, eventually leading to the universe we observe today. We don’t have any direct evidence for early cosmic inflation, but because it would solve several issues in cosmology, it is a widely supported idea.
The universe can be viewed as a “surface” with one less dimension.

A team of astronomers looked at data from the Planck satellite, which gathered the most accurate measurements of the cosmic background thus far. They wanted to compare fluctuations across vast regions of the sky, known as low multipole moments, with the predictions of the standard cosmological model and a model that’s somewhat stranger, a holographic one. What if everything around you, from the distant stars to your very hands, were a hologram? Like Plato’s cave, our world of solid objects and three-dimensional space would simply be a shadow of a two-dimensional reality. On the human scale a holographic universe would be indistinguishable from the reality we expect, but on a cosmic scale there could be subtle differences we might be able to detect.

In the holographic view of cosmology, early inflation is driven by interactions of the quantum field, which would slightly change the appearance of the cosmic microwave background. This is particularly true for low multiple moments, and this difference makes it possible, at least in principle, to prove that the holographic principle is true. In their paper, published in Physical Review Letters, the team report the holographic model fitting the Planck satellite data slightly better than the standard model. The results don’t prove the universe is holographic, but they are consistent with a holographic model.

The idea that our universe might be holographic comes from string theory. Although string theory hasn’t been proven experimentally, its mathematical structure has an elegance and power that makes it appealing as a theoretical model. The holographic principle in string theory is just such an example. In its broadest form, the holographic principle states that anything you can know about a particular volume of space can be learned by looking at the surface enclosing the volume. Just as a hologram can contain a three-dimensional image within a sheet of glass or plastic, the universe could contain its vast volume within a surface.

For example, imagine a road 10 miles long that is “contained” by a start line and a finish line. Suppose the speed limit on this road is 60 miles per hour, and we want to know if a car has been speeding. One way to do this is to watch a car travel the whole length of the road, measuring its speed the whole time. But another way is to simply measure when a car crosses the start line and finish line. At a speed of 60 miles per hour, a car travels a mile a minute, so if the time between start and finish is less than 10 minutes, we know the car was speeding.

If the holographic principle is true, then the universe can be viewed in two different ways: one of space and volume as we intuitively experience it, and one of a “surface” with one less dimension. This holographic duality is mathematically powerful because some laws of physics can be much easier to work with in one view than the other.

The structure of our universe is driven by the constant pull of gravity between stars and galaxies. In the present era, gravity is weak compared to other forces, and is described as a gravitational field in general relativity. In the dual holographic view, gravity is described as a quantum field that can interact strongly with mass. Since it is easier to calculate weak interactions than strong ones, the general relativity approach is more useful. However, in the early moments of cosmic time, when the universe was hot and dense, the gravitational fields of relativity were strong, so quantum fields of the holographic view might be easier to deal with.

The fact that both the standard and holographic models can account for early inflation supports the idea that the holographic principle applies to our universe. Cosmic inflation remains a mystery, but by viewing the universe as a hologram we might just be able to solve it.

Narcotics and Covert Intelligence: How the CIA Commandeered the War on Drugs (3)