Facets and attributes of the Great Cosmic Power Tara


Some texts of Tibetan spirituality (such as, for example, Shaktisangama Tantra) incorporates features of the Great Cosmic Power Kali, Tara, Tripura Sundari and Chinnamasta in the manifestation of a single great goddess. In addition, many times in the same tantric traditions of Tibetan Buddhism we meet the equivalence of Tara with Kali (concerning the cosmic functions, features and particularities of these deities).

In Buddhist texts, the first and most important group of deities emanating by Akshobya is Mahachinna Tara, which is also known as Ugra Tara (meaning Tara in her terrible aspect, as it is depicted in Hindu Tantric tradition). 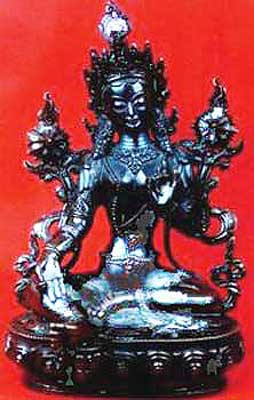 Another form of Tara is Ekajata Tara which is said to have been revealed in India even by the great sage and liberated Nagarjuna, after he took over her form of worship in Tibet. Regarding this aspect, there are now some questions about the initiator of this form of expression of Tara, as Nagarjuna lived in I-II centuries AD and the Tibetan tantric Buddhism began to highlight only within the seventh century AD.

The third main form of Tara is mentioned as Nila Saraswati Tara (which is often equated with Ugra Tara). Tradition says that this form of expression of Tara stems in the Chola Lake, which is near the sacred Mount Meru. Thus, while Nila Saraswati was practicing certain forms of tapas (or austerity) on the shores of the lake, her pure energy “fell” into the water and from then on gave the goddess’s body the blue color. We will specify that although the pantheon of the Tibetan tantric Buddhism mentions various aspects of the goddess Tara, however she is not contemplated as one of the Ten Great Cosmic Powers in the Hindu tantric tradition.

But we can notice that there is a group of female deities, which are somewhat similar in form to the Great Cosmic Power Tara, manifesting different paranormal powers and offering spiritual gifts even of a material nature (in order to facilitate achieving material prosperity) to the loyal and honest worshipers. One of the main features of these deities is that they are often depicted riding a certain animal and being surrounded by a lot of angelic entities that accompany them everywhere, serving them with devotion in a strict hierarchy according to the location that they (deities) occupy in the suite.

Because one of her cosmic attributes is to save or liberate us from various troubles and difficulties we face in life (when we ask her with fervor and sincerity), Tara resembles to some extent goddess Durga (which is a manifestation of the hypostasis of the Great Cosmic Power Kali). For this reason she is sometimes called Durga-Tara. But while Durga signifies the power to remove and destroy any obstacle, difficulty or negative forces that assault us, Tara is the power that makes us almost instantly sublimate these aspects and thus successfully overcome them. In other words, Tara is the very power that makes us transcend all lower and ignoble aspects of our lives. From this perspective, the goddess not only saves us from the imminent dangers, but she also allows us to accede rapidly, rising to more and more elevate levels of spiritual knowledge.

As the last and most difficult obstacle we have to overcome is our own mind, Tara helps us to easily move beyond thoughts and the turbulent waves of ideas arising from moment to moment in our mind. This purely spiritual action of the goddess is easy to understand if we notice that the mind (along with all functions and subtle energies which it manifests) is nothing but a part or a fragment of the Supreme Divine Logos. Indeed, Tara is the very huge and very subtle energy of non manifested sound that transcends Manifestation. 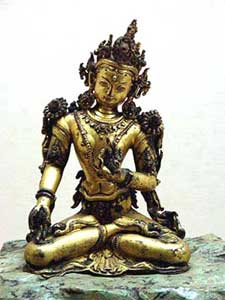 On the other hand, Creation or Manifestation itself is nothing but a modulation on an infinite frequency of vibration of the endless energy of God’s Primordial Logos (or Word). So, from this perspective, Tara can be also regarded as a true creator and at the same time destroyer of the whole Creation, when these actions (of emanation and destruction or resorption) are considered in terms of phonemic energies of the Divine Logos. In this aspect, Tara “contains” within herself all these mantras that exist. For example, to use and assimilate properly the profound spiritual meaning of a mantra that summarizes a very elevated macrocosmic aspect, and to be able to fully identify ourselves with the subtle and blissful energy of that mantra, the grace of the Great Cosmic Power Tara is indispensable and should be invoked with great devotion and aspiration. Also by the grace of the goddess we acquire sublime poetic inspiration or oratorical talent. Tantric Tradition says that one who is fully devoted to the great goddess will never be defeated in debates or arguments of any kind (especially those in spirituality), and his literary talent will be amazing, far beyond the possibilities of artistic expression of other human beings.

Another important aspect in the Great Cosmic Power Tara at the level of the human microcosm is that the goddess also represents the purifying force of the subtle prana breaths which animate every living human being. As the undifferentiated universal subtle breath (prana), the subtle sound (shabda) is manifested in the ubiquitous ether (akasha).
Therefore, Tara helps us through the energy with knowledge (jnana shakti) to cross the “dark waters” of samsara, since the whole knowledge is nothing but a continuous aspiration towards eternity and infinity of the Supreme Reality. In the Hindu Tantric tradition, the Great Cosmic Power Tara sound is the very subtle sound itself that perceives and also reveals the Truth, since the sound is not different from the energy of knowledge and perception. Therefore, in some texts of Hindu wisdom, Tara is worshiped as the Great Goddess of Supreme Consciousness of God.

Thus, in her immense compassion for the limited human beings from creation, Tara favors the collection and accumulation of the divine nectar (soma) in our bodies, resonating especially with the esoteric aspects, hidden and occulted to the profane knowledge. In the mythology of the Purana-s (which are ancient Hindu texts of spirituality), Tara is the wife of Jupiter, but she also has a secret love affair with the Moon. Consequently, Tara reveals us as having a dual nature: on the one hand, she supports and reveals knowledge (Jupiter), and on the other hand, she reveals the pure spiritual bliss (ananda) or endless divine ecstasy (the Moon). From her secret love relationship with the Moon, Tara gave birth to a son, Mercury (planet that causes the manifestation of the deep resonances with the practical mental aspects, with intelligence and oratorical ability).
In Tibetan tradition, more than a god or a goddess is a Buddha, a being who has transcended forever the cycle of life and death. As an illuminated being, a Buddha receives wisdom, compassion and extraordinary abilities. The Buddha-s integrate all aspects and possibilities of existence. They are one with everything that exists. They may manifest bodies of light and shine and can emanate different types of bodies in the world to help the beings of this confusing and challenging world. Tara being beyond all these conditions is called the Mother of all Buddha-s.

In Tibet it is believed that she is embodied in every pious woman, and also in the two wives – the Nepalese Princess and the Chinese Princess – of the first Buddhist king of Tibet, Srong-brtsan-sgam-po, which are identified with the two major forms of Tara: The White Tara and the Green Tara. A third aspect of Tara is the Red Tara.

- The White Tara (in Sanskrit: Sitatara, in Tibetan: Sgrol-dkar) incarnated in the Chinese princess. She symbolizes purity and she is often described standing on the right side of her spouse, Avalokiteshvara, or sitting with her legs crossed, holding an open lotus flower. She is generally described as having three eyes. The White Tara, the Mother of all Buddha-s, is the one who gives longevity and energizes those who visualize her, being afterwards able to use that energy for their spiritual practice.

-The Green Tara (in Sanskrit: Syamatara, in Tibetan: Sgrol-ljang) is believed to have incarnated in the Nepalese princess. She became the Green Tara when she descended into the world of manifestation. She looks like a young playful girl while the White Tara is represented as a mature and wise woman. The Green Tara is the most gentle and sincere manifestation of Tara. It guides us in our ascent to enlightenment. Tara belongs to the Krama family, symbolized by its green color and she is the full of wisdom counterpart of the transcendental Amogasiddhi Buddha. She is described sitting on a lotus flower with her left leg placed over her right thigh, and her right leg hanging. Her left hand is placed on the heart with the palm out, her thumb and ring finger touching, and the other three fingers are pointing up making thus the mudra of protection. Her right hand rests on her right knee, with the palm making the mudra of generosity..

– The Red-Tara (Kurrukulla). She represents the passionate energy. Her red-golden color awakens both carnal and spiritual love. She dances over the demon Rahu (ignorance) destroying him. Her bow and arrows pierce all difficulties, her right hand down makes the gesture of stability, abayah mudra. The garland of skulls indicates that she is a Tibetan form of Kali, who transforms death into life. She offers health and a life full of joy to all her worshipers.