Covered in mystery, revealed in splendor, the Great Goddess has been worshiped for millennia. Sculptures found in prehistoric caves dating from 30,000 years ago have shown that Tara was revered since ancient times. The original bronze statue which is dated 7th or 8th century AD was found in the north-east of province Lanka between Trincomale and Batticaloa. The total height of statue is 143.75 cm. 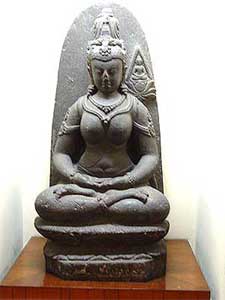 Long before (as mentioned in a Tibetan treaty Taranatha), in a universe called the Light Divided, there was a princess called Jnana-candra who was extremely devoted to Buddha. Every day she brought offerings to Buddha Dundubhisvara (“The Sound of Drums”) and the Sangha community, reaching thus a high level of consciousness Bodhicitta (tib. byang-Chub kyi sems, the heart of the enlightened mind. The absolute Bodhicitta, according to Gampopa (a disciple of Milarepa), is the void inseparable from compassion – bright, firm, and impossible to define through concepts. The relative Bodhicitta appears though a glimpse of the absolute one and represents the inner drive to follow the Path to Enlightenment and to work with compassion for the liberation of all beings from Samsara), aspired full of compassion to achieve Enlightenment for the benefit of all beings. The disciples suggested that she should pray to incarnate as a man, progressing thus as a Bodhisattva and eventually becoming a Buddha (this because, as we often meet in the Buddhist literature, for a woman to progress on the spiritual path towards higher states of consciousness, she has “become a man”). Finally princess Jnana-candra says:

“Here there is no man, no woman here,
No ego, no individual and no conscienceness.
The names of “man” or “woman” are not consistent,
But bring confusion in the ordinary human mind.”
And she makes the following covenant:
“There are many beings who desire Enlightenment
in a man’s body, but nobody wants
to help the sentient beings
being in a woman’s body.
So, until samsara is empty,
I will help sentient beings
Staying in a woman’s body!”

She continued to be so devoted to the mission of saving the human beings from ignorance that Tathagata Dundubhisvara called her Tara or The One Who Provides Guidance in the Great Passing.

Facets and attributes of the Great Cosmic Power Tara

Hymns of praise dedicated to Tara