By 2030, two thirds of the world will no longer have access to drinking water.
This is a problem that we face together, regardless of location. When you start treating water as a commodity and the price of water depends on supply and demand, our whole water will get controlled by the corporations. These giant corporations knowingly intoxicate the people from communities that are in the vicinity of factories producing plastics needed for bottling drinking water – the famous PET bottles, with which we are accustomed so much that we do not ask ourselves the question whether this industry is really as safe as we imagine it is.  Production begins with the production of paraxylene, an aggressive compound in the manufacture of plastics. What a lot of people do not know is that it comes from the family of benzene, which is carcinogenic. People who live in the vicinity of these plants are so intoxicated, get sick and die. 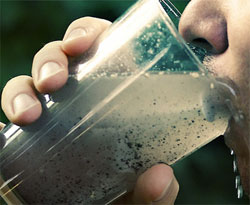 Furthermore, the tests that have been made over time have found all kinds of bottled water contamination, which we would have never found out of if people hadn’t asked for water testing. The results obtained from laboratory tests of bottled water are downright terrifying. Experts have found in water from vinyl chloride to butadiene, benzene, toluene, styrene, and phthalates. Toluene is a component of gasoline used as paint diluent. It is a neurotoxic agent correlated with reproductive problems. Styrene is a carcinogen that causes reproductive problems. Phthalates can cause dysfunction especially in fetuses and reproductive problems in both genders.
The small plastic bottles are made of PET, while larger ones are nowadays made of polycarbonate plastic, the main ingredient of which is bisphenol A – the basic molecule of which the hard transparent plastic is made of. The bisphenol from this plastic gets in the water. Bisphenol A can be one of the strongest toxins known to man, which is very dangerous, especially for the fact that it acts in very small doses like an estrogen.  A very serious problem caused by this industry is the massive pollution of the natural environment, our entire planet being virtually suffocated by the enormous quantities of plastic that are thrown away after huge daily intake of bottled water. The Earth’s oceans have become a giant plastic soup, in which the sea living forms survive with more and more difficulty. The movie that we invite you to watch speaks for itself, showing as clearly as possible the criminal game of the big corporations, whose sole and single God is money. Driven and led from the shadow by the planetary satanic sect that is Freemasonry and indebted to the diabolical plan of extermination of a large part of the globe population, the large corporations, which kill the people slowly but surely, without scruples, through these criminal industries, are only a small part of the Freemasonry cunning armory being used to destroy the population of the planet.  Fighting for water – part I Fighting for water - part II  yogaesoteric11 January 2012

The posture of the tiger walk

The posture of the turned Dragon