Gates to Shambala, the mysterious realm of the wise

The essential message of Shambala is that spiritual supreme realization, ultimate spiritual liberation, is not an abstract, untouched goal but it can be reached through sincere aspiration and spiritual effort sustained right here and now. This is the teaching of Shambala. Shambala is like a spiritual Sun around which the entire planetary wisdom is gravitating: all the greatest religions, the greatest initiate traditions, esoteric divinely inspired currents, all authentic spiritual schools and paths are inspired by Shambala. That is, Shambala is named as the Spiritual Centre of our planet.

The communion between the world of Shambala and the physical world of our planet is permanent and alive, even if few of our planet’s inhabitants are aware of this world. There are of course, “darker” periods of history during which the Shambala world is hidden, occulted, rather unknown by humans. Traditionally though, it is affirmed that, during the periods of spiritual prosperity of humanity, the existence of Shambala is totally revealed to people. This is how it will be in the near future.
What does “communion with the world of Shambala” actually mean? First of all it is a subtle communion, paranormal, empathically and telepathically at the same time: sometimes it is manifested through inspiration, paranormal protection, synchronistic as well as through miraculous phenomena. Thus this communion is mostly energetic; it is not necessarily a physical natured communication. This phenomenon is easy to understand for any yoga practitioner and in real life expresses the establishment of a resonance state placing the human being in unison with the mysterious world of Shambala.

A more mysterious aspect is related to journeys in Shambala which the planetary tradition relates to with great discretion, but with a doubtless fingertip of certainty and authenticity. There are several known cases of great wise-men that traveled in Shambala. From the western ones, Apollonius of Tyana, Paracelsus, Nicholas Roerich, are only a few of the famous names. Is such a thing really possible?

We know as yogis, the fact that man is endowed, beside his physical body, with other structures or subtle bodies, which don’t belong to the physical world, but rather to some superior level of vibrating frequencies of the physical world. With the help of these structures, bodies, subtle vehicles (meaning of a more refined nature then the physical gross level), any human being can “travel” in any subtle dimension of the macrocosm manifestation. Thus, through perseverance and applying some specific yogi methods, any human being can train in this way and can learn to displace at will, travelling in his subtle “bodies” toward other mysterious, wonderful, paradisiacal realms. 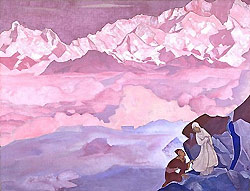 Concerning traveling in Shambala, there are stories of some people that have translated totally, meaning, including with their physical body, to this subtle world that exist in the ether plane. They started their journey from the physical plane and arrived at the destination of their journey in the ether plane, with everything, through a wonderful phenomenon of translation. This type of extraordinary journey, and humans’ incapacity to understand certain natural phenomenon in a multidimensional universe led to the idea that Shambala is in fact somewhere in the physical world, hidden in the Himalayan Mountains or in the dessert areas from Central Asia, or in some distant realm up in the North.

But Shambala exists in the ether plane. In the physical plane there are only privileged areas, which have certain exceptional energetic charges, that are real “springboards”, tunnels, windows, …”portals” to the world of Shambala. These are some specific places on Earth where the resonance with Shambala is very powerful. There, everything is possible for those who aspire to enter in touch with Shambala and with the King of Shambala: telepathic communication as well as subtle perceptions, and extra corporal journeys in the world of Shambala are very easily realized, of course, if certain conditions are met. The purity of the heart and aspiration are some of them. So, mostly for beginner yogis (beginner in the sense of communicating and traveling in Shambala) these mysterious “portals” are a veritable chance to enter into the mysterious reality of the realm of Shambala.

Where are these “portals” we mention here? And what are they, as they are not physical portals? They are more specific energetic structures which exist in the subtle plane in certain special places that have a powerful energetic charge to the Shambala resonance. These energetic structures constitute veritable subtle “tunnels” that tie us directly to Shambala, analogically speaking the “worm holes” from modern physics.

Places which have an energetic charge specific to the resonance of the spiritual planetary Centre are all the places on Earth where a powerful initiator centre exists, or existed, no matter how long ago: because all authentic spiritual schools, all spiritual centers are permanently sustained and inspired by Shambala. Thus, we are talking about all the sacred places from our planet which meet this definition, from the Kailas Mountains of Tibet, the temple of Apollo in Delphi, the Pyramids in Egypt or the Pyramids of Teotihuacan in Mexico.

In all these places, a highly receptive human being can easily feel the energetic nothing, similar to an “imprint”, of Shambala. But there are differences. Some energetic centers can be more powerful then the others. Some can evidently be more active (intensely stimulated), while others can be latent (asleep). The special impregnation of such a place correlates highly to the specific featureof the place and of the certain period from the past when that spiritual center was active. Due to the differences, for the initiated one it is obviously the common vein.

Many of the Shambala seekers associate it with Tibet and have a deeply rooted belief that in Tibet (or somewhere else in the Himalayans or in Central Asia) they have the most chances to find these mysterious “portals” to Shambala. For all yogis in India, Nepal and Tibet, nostalgias are awakened that sometimes come from other lives. These are necessary to know and to understand that Shambala does not only belong exclusively to certain traditions. If we build a phantasmagorical image about Shambala we only lose the chance that each of us have here and now to live in unison with the sublime wise realm, whose portals are now open wide for the pure, brave and especially dedicated to God and his fellow creatures.

There are not one, but more mysterious “portals” to the realm of Shambala even within our country’s boarders, because spiritual communities and centers have existed here during different periods throughout the past as well. Our country has its own treasure of sacred places as well. No matter how far along on the time-line, there existed that magnificent spiritual Dacia tradition which boils inside the imagination of many of us, it’s force still penetrates through places like Sarmisegetuza, the Sphinx from Bucegi Mountains, the Omu peak, … and thus we can mention, without the slightest doubt, that in all these places and more, there exist mysterious “portals” to Shambala.

In Romania, in the past years, several exceptional spiritual revelations have occurred. There are a great number of yogis who have received initiations in very many spiritual, totally revolutionary methods for the western society. Moreover, we recognize if we are to seek a place on the planet where we have the great chance to pass to the mystical path of Shambala, Romania is a privileged one. It is not necessary to go to the end of the world, because within our boarders there are very active centers of resonance with the world of Shambala, there are real open “portals” through which we easily enter into this veritable planetary spiritual center.

There we can even meet the great King of Shambala, who, according to tradition, is the real King of our planet.
In other articles we will present some examples of “portals” to Shambala which are within Romania’s boarders and some yogi’s stories which tell of experiences in those privileged places and the exceptional states of communion with the King of the World or translations to Shambala.