One of the most acknowledged scientists in the world has recently developed a theory stating that people that are filled out and fit are much happier than the thin ones. James Watson, specialist in genetics, awarded with the Nobel Prize (one of the scientists who discovered the spiral DNA structure) flatly considers that women with curvy, vital bodies enjoy intense sexual life more than thinner women.

Watson, is known to have successfully headed the human genome project and has recently turned to the controversial science of the human image. He has recently stated in a conference at the University College in London, that his searching already point out that harmonious overweight bodies trigger biological effects that urge women’s flexibility and harmony, which also endows them sexually in lovemaking.
“Thinness and body weakness have never fit sexuality”, 72 Watson stated in 2002. “Posh Spice and Calista Flochart (movie star) may show a smiling face in front of the cameras, he said, nevertheless, beyond this shining appearance they hide some weak, unhappy souls.”

His research in body chemistry pointed out that in the case of women, harmonious overweight and filled out bodies cause endorphins enhancement – which will engender a natural increase of wellbeing and a remarkable improvement of the frame of mind. Also sexual hormones are enhanced which leads to the awaking and increasing of sexual drive.
Instead, in the case of the thin men and women, an opposite effect has been recorded: the brain receives less endorphin when the body is weak and less fat.
Watson’s theory is available in this respect both for men and women. His explanation would be that in ancient times, man has spent most of his time in pursue of food. Hard work was then rewarded by food, which helped a harmonious fit body, and triggered body weight. This is why if we are too thin we are unconsciously looking forward for the next meal.

In evolutional terms Watson concluded that: “Thin persons always are unsatisfied. The satisfied ones are harmoniously fit. This is one of the reasons why thin people are more frequently assigned jobs; as they are generally unsatisfied, they will work harder. Fit plump people are in a good temper, affable but often unlikely to be promoted. ”
On the other hand, thin people often seem to be urged in their actions by their need to find the things they miss. This is why financial success can be easily attained by weak people (as a compensation at a lower level, however).

“Kate Moss (A-list model) may probably be the most famous person in the world; nevertheless her countenance and her body depict quite a sad person. In fact who could say a happy supermodel? Again Watson wonders: “Why are such persons always closely connected to drugs? However, I think in her case it’s not about a weak person, but rather a thin one trying to reach happiness by means of drugs.”
Watson’s interest in this field is strictly scientific. But he reached his latest so to say “obsession” due to a chat he had to a taxi driver in New York, who told him that a scientist in Arizona, who in his attempt to create a new medicine, injected a hormone upon himself, which triggered him an 8.30 hours erection! 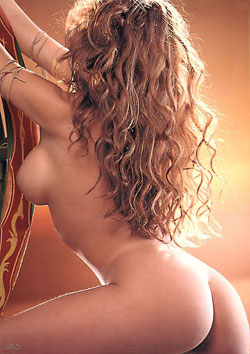 The hormone in question is MSH (Melantrop Hypophysar Hormone; yogis know that the hypophysis  is a gland closely connected to Ajna chakra) related to the sexual urge and to sunlight. “The MSH is a hormone that always seemed boring to me before learning about these things” Watson said. But once his interest stirred he studied even more attentively this hormone and this is how he found out that it was closely connected to 2 other substances in the body – the endorphins (which is known as a fact that trigger the states of pleasure and good temper) and the leptines. It was noticed that the MSH is influenced by the leptines and it is also closely connected to the sexual drive.
“The plumper we are, the more leptines we have in our body and thereby we may also have more MSH”, Watson says. “In my opinion our frame of mind is highly controlled by endorphins and we certainly have more endorphins, the plumper and the more harmonious we are. This is why nobody has ever thought about Santa Claus as a thin person – as thin people often are anaemic and unsatisfied”.

As the MSH is strongly influenced by the sunlight, we may say that our happiness depends on getting sunbaths in complete NUDITY as much as on being most fit and plump.
“People that perform intense sexual activity are vital and with harmonious plump bodies who take sunbathing completely nude” he said. “Now I’m looking at plump pairs completely different. On the contrary when I see a pair of thin people, I know for sure that they have certain problems.”
This is why Watson recommends curvy women who are harmoniously filled out to find men proportionally fit (in terms of sexual and vital energy) in order to reach a satisfying and happy life.

The states of romantic trance enable us to experience unusual, intense and extraordinary states

A Short Introduction in the Art of Caressing (I)

The unveiled mysteries of the human erogenous areas