HAARP systems could be adapted to send fires to exact locations. Has anyone ever looked into HAARP as a fire weapon? It is a naval system which is used to manipulate weather, and can be used to cause earthquakes by directing huge energy from antennas directing emf into space, which is redirected to target by satellites. 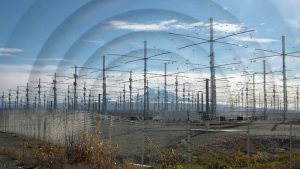 The weather version of HAARP heats the ionosphere, which expands out into space drawing the jet stream into the resulting gap, moving weather systems.

The earthquake version sends resonance into the earth’s crust.

A fire version would be similar but use a heat creating wavelength.

The way to stop HAARP attacks on this type would be to either take out the satellites that deflect the energy to target, or take out the antenna array sending the energy up to space. Alternatively hit the power stations that power the arrays. Or all three.

Smaller versions of HAARP are also available to NATO. Maybe there is someone reading this who has some detailed knowledge of this topic.

For Russia to attack HAARP would be a significant escalation, involving Russia in attacking NATO countries directly, so maybe the hesitation in taking out this threat is political.

There are numerous HAARP arrays around the world and taking out all of them would be a massive undertaking. There is the suggestion that the technology has been miniaturised so that HAARP can be housed on ships or on much smaller land areas than HAARP was in its prototype versions.

Russia would possibly be able to take out all these sources, but the political situation does not permit such an action.

If HAARP or a similar system is being used by NATO against Russia, this would be a more likely explanation to the so-called ‘sabotage’ or drone attacks on fuel and arms depots in Crimea, and the attacks on the Moskva and the various fires in Moscow and attacks on fuel infrastructure in the Far East. The situation could be a lot more complex than the daily commentators are aware of or willing to conceive.

The War Moves Forward as Outlined by the RAND Corporation on Behalf of the Pentagon.…